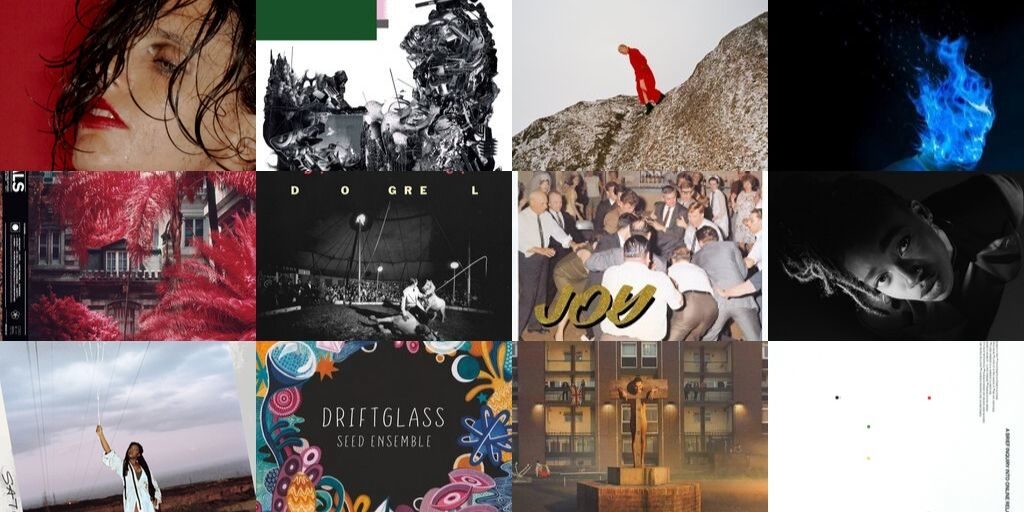 Since its inception in 1992, there’s been an air of dissatisfaction that’s hung over the Mercury Prize. It’s only grown more so in recent times, and it’s not hard to see why. The shortlist is often too safe and predictable, with commercial big-hitters regularly nabbing spots ahead of rising stars and underground sensations, and the exclusivity of the event (its £228 entry fee, the carefully selected panel of industry-based judges) whiffs of elitism. With that said, this year’s nominees make the strongest case for the prize’s existence in some time.

Of course, there are a myriad of notable omissions. As is the norm, metal is unfairly disregarded, despite terrific albums from Architects (2018’s Holy Hell) and Employed To Serve (this year’s Eternal Forward Motion). There’s no electronic albums up for the prize either, with Thom Yorke’s Anima and Ross from Friends’ Family Portrait both missing out. Meanwhile, Nilüfer Yanya and The Japanese House established themselves as two of Britain’s best singer-songwriters with their debut albums, yet didn’t make the cut, and previous Mercury winners James Blake and Skepta were also left out of the final 12, having brilliantly refined their respective crafts on Assume Form and Ignorance Is Bliss.

Although there are a host of absentees that were unfortunate not to have been nominated, this year’s shortlist is a surprisingly fine portrait of where British music is at right now. Yes, each album here is musically innovative, but they all seem to reflect the anxiety of modern times in one way or another. By acknowledging records that primarily focused upon social and political issues, the Mercury Prize feels more relevant than they have done in years.

Without further ado, here’s our rundown of the 12 nominees, and their chances of taking home the gong.

Clearly a favourite with the Mercury judges, Anna Calvi’s third successive nomination is no less justified than those for her self-titled debut and 2013’s One Breath. Produced by frequent Nick Cave collaborator Nick Launay, Hunter was a wonderful evolution of Calvi’s sweeping, cinematic goth-rock, switching between glacial ballads and rugged, primal stompers in a way she only knows how. Underneath the sublime guitar work and flamboyant vocals are Calvi’s most personal lyrics yet, which delve deep into themes of gender and sexual identity.

Will she win? ­– Unfortunately, it’s highly likely that Anna Calvi will come up short once again. As critically acclaimed as Hunter was, it’s still not as exciting as some of the other albums up for the award. Nonetheless, it would still be a worthy, albeit very surprising winner.

South London’s Black Midi are perhaps the most unique proposition on the list. Their debut album Schlagenheim ­– which, aptly, means “to hit home” in German -was an awe-inspiring exercise in experimentation, full of wonky structures, jarring tempo shifts and mathy, off-kilter guitars. There’s a nervy energy that permeates the record, which is only heightened by the discontented lyrics and Geordie Greep’s unsettling vocals.

Will they win? – One of this year’s dark horses for sure. The judges often lean towards artists with a degree of commercial success, but they aren’t averse to throwing a curveball from time to time (see Benjamin Clementine in 2015). They might not be a massive name, but Black Midi’s sound is bold and creative enough to make them deserved winners.

Despite an impressive back-catalogue, Reward marks Welsh singer-songwriter Cate Le Bon’s long overdue first Mercury nomination. Written at her home in the Lake District, it’s strung with a palpable sense of isolation, but it doesn’t compromise the lush, airy instrumentation. Melodic yet full of the idiosyncrasies that have defined Le Bon’s work thus far, Reward is the work of an artist at the top of her game.

Will she win? – It’s safe to say Cate Le Bon isn’t one of the favourites going in, but it would be a pleasing surprise to see her pick up the award. Just don’t hold your breath.

British rap has been in rude health since Skepta’s 2016 Mercury Prize win, something further demonstrated by Dave’s remarkable ascendancy. After scoring a number 1 single with ‘Funky Friday’ towards the end of last year, he then released his debut album Psychodrama. A semi-concept album based upon his brother’s therapy sessions in prison, it effortlessly dissected heavy themes such as race, depression, and domestic abuse over a chilly, sparse backdrop, and cemented its creator as one of the most thought-provoking and compelling storytellers around. A true masterpiece.

Will he win? – He faces stiff competition, but Dave is clearly one of this year’s frontrunners. He’s still one of the bookies’ favourites, and it’s nigh on impossible to argue that he doesn’t deserve to win.

Foals – Everything Not Saved Will Be Lost: Part 1

Foals have gradually evolved from abstract dance-punks to bona fide festival headliners. Their latest effort, Everything Not Saved Will Be Lost: Part 1 reaffirmed their status as one of Britain’s elite rock bands, and tantalisingly set up Part 2 (which will arrive in October). Sonically, it was an amalgamation of each of their past albums, delivering ferocious riffs and propulsive grooves with typical aplomb. Meanwhile, Yannis Philippakis’ lyrics were more socially conscious, turning his gaze towards climate change, mental health issues and the current political chaos.

Will they win? – As Wolf Alice took home last year’s Mercury Prize, it’s unlikely the judges will go for another major rock band this time around. Foals wouldn’t exactly be the most inspiring choice either; Everything Not Saved was one of the best of their career, but there are other records that captured the zeitgeist just a little bit better.

They are still young, but Fontaines D.C.’sDogrel sounded like the work of a band well beyond their years. It was a collection of raw, rumbling post-punk aesthetically similar to the likes of Shame and IDLES, but with frontman Grian Chatten’s unique delivery and songs that chronicled life in working class Ireland, they offered something a little different to their peers.

Will they win? – Another one of the surprise packages for sure. They might not have the same level of mainstream exposure as other artists here, but Fontaines D.C.’s poetic yet effervescent sound captured the hearts and minds of critics, so don’t be too surprised to see them snatch this year’s award from one of the big guns.

IDLES – Joy As An Act Of Resistance

By turning punk completely on its head, IDLES gave us one of the most vital records in recent memory. On the surface, Joy As An Act Of Resistance was snarling and uncompromising, but underpinning each song was a defiant feeling of positivity. Singer Joe Talbot handled toxic masculinity, immigration, and nationalism with unparalleled joie-de-vivre and acerbic wit, while also laying bare his vulnerability. A rip-roaring, life-affirming testament to self-empowerment and the importance of unity in troubling times.

Will they win? – It’s been a whirlwind couple of years for IDLES, who have also enhanced their reputation with their live shows and a legendary appearance on Jools Holland’s ‘Later…’. Winning the Mercury Prize would propel their momentum even further, and would be a fitting reward for one the most important bands Britain has to offer.

Little Simz reminded everyone how talented she is with her mesmerising third album Grey Area. Introspective yet bolshy and confident, it showed how much the London rapper has evolved since her early mixtapes, and contained some cracking instrumentals courtesy of British hip-hop producer Inflo. A watershed moment for an MC who’s flown somewhat under the radar until now.

Will she win? – The Mercury Prize hasn’t been won by a woman since PJ Harvey was crowned for the second time in her career in 2011, but the long wait for a female victor could very well end this year. An intelligent, energetic and emotionally compelling performer, it’s no shock that Little Simz is also going in as one of the favourites.

Nottingham singer Naofollowed up her impressive 2016 breakthrough For All We Know with an even better sequel. Saturn once again showcased her extraordinary vocals, which even at their most soothing and honeyed, were totally commanding. The album’s production was wonderfully varied too, ranging from wobbly funk to cool, sunny afrobeat. Despite the constant stylistic shifts, Saturn felt like a focused, singular vision from an increasingly adventurous and dynamic musician.

Will she win? – One of the only albums here not transfixed on politics, it’s tough to see Nao walking away as the winner.

We’ve finally reached the annual “token jazz album” that’s on every Mercury Prize list, but it would be unfair to assume that SEED Ensemble aren’t here on merit. A 10-piece collective, they are one of the faces of the UK’s exciting jazz revival, warping classic sounds by incorporating African and Caribbean sounds as well as spoken-word poetry and hip-hop, as Driftglass demonstrates.

Will they win? – Absolutely no chance, sadly.

Slowthai – Nothing Great About Britain

Slowthai’s Nothing Great About Britain has been out since May, yet its impact hasn’t waned in the slightest. Even on repeated listens, it packs the same devastating punch; it’s impossible not to be captivated by Slowthai’s manic, blistering flow, the claustrophobic production, and the witty yet brutal commentary on a Britain that’s edging towards the brink of collapse. A near-flawless debut from a one-of-a-kind rapper.

Will he win? – Like Dave and Little Simz, Slowthai’s politically-motivated bars have earned him his fair share of plaudits, but his punky demeanour sets him apart. His crossover appeal could be the factor that tips the balance in his favour.

The 1975 – A Brief Inquiry Into Online Relationships

The 1975 remain a divisive force, but there’s so much to admire about their post-modern approach to pop music. Sprawling and eclectic, A Brief Enquiry Into Online Relationships was Matt Healy’s most ambitious product of his vision thus far, hopping between genres with limitless abandon. The vast array of styles compliments Healy’s attempts to make sense of modern life, whether he’s focusing on relationships, addiction, or our over-reliance on technology. It’s pretentious and fragmented, but it’s also utter genius.

Will they win? – It would elicit some groans if they were to win, but no band as popular and successful as The 1975 are making music as challenging as this. Definitely a strong contender.