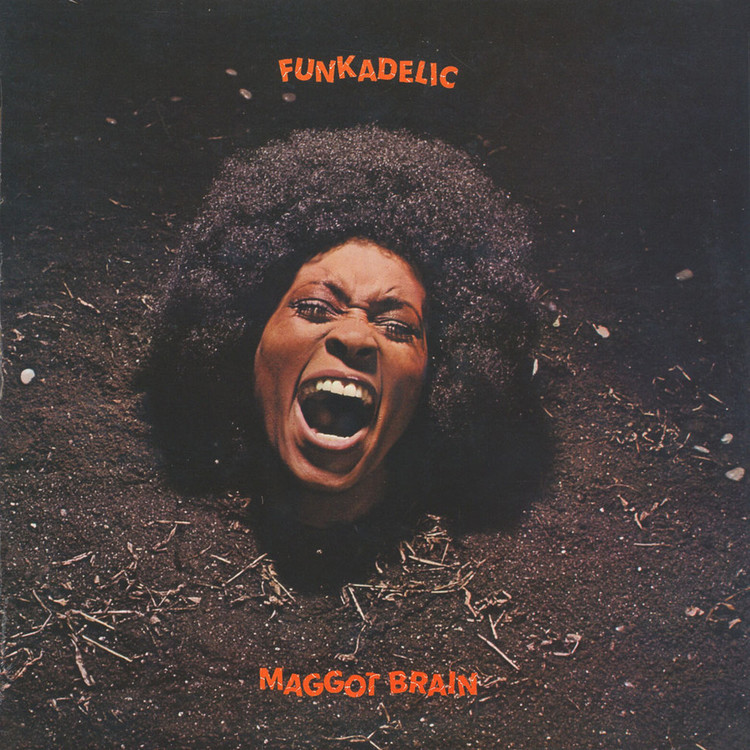 For some people, hearing the name Funkadelic may likely conjure up images of the rhinestone-studded, outer-space wackiness of mid-to-late ‘70s P-Funk, complete with Bootsy Collins slapping a star-shaped bass guitar and keyboard magician Bernie Worrell delivering hit-making synth riffs. Funkadelic, and sister band Parliament (a different funk band featuring the same group of musicians), have over the years produced a huge number of funk classics, from ‘Flashlight’ and ‘Give Up The Funk (Tear The Roof Off The Sucker)’ to ‘(Not Just) Knee Deep’ and ‘One Nation Under A Groove’. Yet their most culturally revered piece of work – the jewel in their funky crown – is a collection of raw, psychedelic rock tracks that explore love, self-control (or lack thereof), war, life, and death. In 1971, well before the arrival of Bootsy or the finalised concept of P-Funk spiritualism, Funkadelic released their third studio album, Maggot Brain.

Greeted with a lukewarm reception on its release, Funkadelic’s Maggot Brain is now rightly hailed as a classic, as its sounds and its concepts still continue to inspire and fascinate new audiences. Produced by George Clinton, the band’s leader and primary artistic visionary, Maggot Brain is certainly an odd collection of material, striking contrasting tones and portraying an eclectic mix of moods and messages. Then again, Funkadelic themselves were regarded as an eclectic mix; they had begun to carve out a niche in the late 1960s as a particularly outrageous psychedelic rock band, not least through their first two albums, the self-titled Funkadelic and Free Your Mind And Your Ass Will Follow, that demonstrated their obscure and often humorous lyricism and adoration for acid-soaked existentialism. Being African-American artists, the mere suggestion that Funkadelic were a rock band was bizarre enough for the Sixties American social sphere, as rock music was seen largely as a genre dominated by white musicians, and consumed by white audiences, with very few exceptions made for artists such as Jimi Hendrix and Sly Stone. Perhaps the unbalanced social atmosphere of the time, combined with the zany tones and textures of this album, resulted in an initial lacklustre response from confused critics, who couldn’t foresee the impact Maggot Brain would have on funk, psychedelic rock, disco/dance and hip-hop music.

The album opens with the title track, ‘Maggot Brain’, with a delay-soaked spoken word introduction setting a suitably transcendentalist tone, from which an odyssey of sound develops, curated mainly by guitarist Eddie Hazel’s devasting guitar work and Clinton’s excessive manipulation of studio post-effects. At ten minutes and 21 seconds, it’s the longest track on the LP, and conveys immense emotional turmoil without ever featuring a sung vocal line (discounting the brief spoken intro). It is rumoured that Hazel performed the solo that governs the structure of this four-chord loop whilst under the influence of LSD, and that Clinton had told him to play as if he was reacting to the news that his mother had been found dead. Mid-way through the piece, Clinton supposedly instructed Hazel to play as if his mother had then resurrected from the dead, and was alive and well again. The piece therefore almost acts as a conduit for Hazel’s immediate emotional responses, allowing him to explore the sensations of devastation and heartbreak, before replacing these emotions with elation and relief, all of which being conveyed through the intonation of the notes. Deservedly praised as Hazel’s finest recorded moment, ‘Maggot Brain’ is unbelievable album opener.

If ‘Maggot Brain’ sends listeners off out into space, then the next track on the album, ‘Can You Get To That’, brings them right back down to earth. Differing in almost every way to the previous track, it’s a comforting and unapologetically jolly proto-funk singalong that flashes hints of gospel and folk-blues, and features the singing group Hot Buttered Soul. With lyrics that discourage “basing your love on credit” and acting in a self-centred manner in your relationships with others, this track is now the most popular piece of music from the album, surpassing even the title track on streaming platforms, maybe due in part to its more palatable run-time of just two minutes 51 seconds.

Continuing the pattern of track-to-track contrast, the organ-ladened third track, ‘Hit It And Quit It’, depicts the exact opposite message to the one in the lyrics of ‘Can You Get To That’. It seems to be a celebration of the one-night stand, and promiscuity in general, with the phrase being repeated throughout and making up majority of the lyrical content. It’s interesting to see how something as simple as the ordering of the tracks on this album still provides comment on the conflicting emotions a person can experience over one situation, and it’s even possible to imagine that the lyrics of ‘Hit It And Quit It’ are in fact the inner monologue of the selfish character that is being addressed by the lyrics of ‘Can You Get To That’.

As well as the staggering solo in ‘Maggot Brain’, another Hazel highlight on this album is track five, the wonderfully titled ‘Super Stupid’. Directed at Hazel himself, the lyrics of ‘Super Stupid’ tell the tale of an individual who took heroin under the impression that it was cocaine, and subsequently gets hooked on the drug, leading to the further deterioration of his mental and physical health. ‘Maggot Brain’ was in fact a nickname for Hazel that was coined by Clinton, as he supposedly was psychologically rotting away due to his excessive drug use. The track suitably features blistering guitar work from Hazel throughout, from the incredibly aggressive main motif, to his extended solo section, dripping in fuzz and feedback.

As well as exploring the emotions evoked by life and death, trust and lust, and drug use (or rather, abuse) Maggot Brain also includes a few tracks inspired by political topic matter. Perhaps the album’s most politically-driven track, lyrically at least, ‘You And Your Folks, Me And My Folks’ is a plead for peace between the warring, working-class communities of the U.S. in order to help achieve overall social equality. Vocalist Billy Nelson begs the listener to empathise with others, with whom they may not see eye to eye, in order to avoid unnecessary and unhelpful violence between those who should be working together for a brighter future. The final track on the album, ‘Wars Of Armageddon’, can be perceived as a representation of the possible future humankind have to look forward to, should this plea for peace be ignored. The track is another lyric-less psych-funk freak out jam, just shy of 10 minutes, and in complete dynamic contrast to the sparse textures of the title track ‘Maggot Brain’, ‘Wars Of Armageddon’ conveys chaos, destruction and a celebration of the end of all things human. The end of this extended jam, and the end of the whole album, is marked by the deathly rumble of a nuclear bomb being detonated, followed by a slow, pounding heartbeat, allowing the listener to reflect on their own thought about future, and observe the emotions this evokes within them.

Overlooked at first, Maggot Brain is now hailed as a masterpiece of psychedelic rock, and an album that foreshadowed the greatness yet to come from Funkadelic, and from George Clinton. Perhaps if P-Funk hadn’t become such a prominent aesthetic in the American popular music sphere of the late Seventies, Maggot Brain may have remained largely unappreciated, and criminally underrated. Thankfully, it now basks in the adoration of funk and rock fans alike, with its merging of multiple genres and emotional themes appealing to an ever-growing audience. The whole albumis a demonstration of the fluidity of emotions, and the ways in which an individual’s character shapes their experience of life itself, which may be why it’s still so accessible, despite being so bizarre. A psychedelic staple, Maggot Brain deserves every bit of admiration it has received over the past fifty years.

Listen to Maggot Brain by Funkadelic here via Spotify, and tell us what you think below!