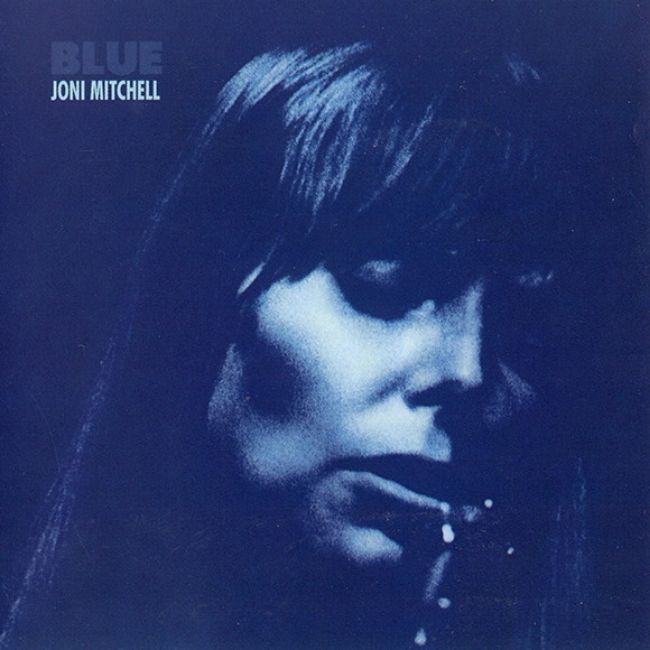 Before even beginning to think about the significance of Blue, it’s worth remembering and appreciating the extent to which Joni Mitchell was a trailblazer in a male-dominated music industry at the turn of the Seventies. Although she initially owed her breakthrough to the patronage of former Byrd David Crosby – who producer and duly suffocated Mitchell’s 1968 debut album Song To A Seagull – she was a girl with a guitar wielding complete artistic freedom in an industry where females largely still had background roles penning songs for others. Mitchell had honed her earnest folk-pop aesthetic quickly over the course of two further albums, 1969’s hippie-ish Clouds and 1970’s much more mature Ladies Of The Canyon, a period that produced some her best-known songs like ‘Both Sides Now’, ‘Chelsea Morning’ and ‘Big Yellow Taxi’, but she was one of just a handful of anomalies in the industry.

That tide began to turn with the onset of the Seventies, most notably with the commercial juggernaut that was former Tin Pan Alley songwriter Carole King’s Tapestry, but it was nevertheless not a paradigm that the industry was taking particularly seriously, or putting any sort of major promotional effort towards. Blue, released in the summer of 1971 to instant critical acclaim and which gradually has sold over a million copies, helped to change the music industry’s outlook on female solo artists in a more positive manner, as well as the media and general public’s perception. In terms of Mitchell’s own artistry, it marked a turning point away from the acoustic folk of her earliest work towards the more layered, textured work of albums such as 1974’s Court And Spark and the jazz-influenced likes of The Hissing Of Summer Lawns and travelogue masterwork Hejira, both of which are being increasingly revisited

Blue is a self-contained little universe of melancholy and a completely flawless example of the singer-songwriter paradigm, and one that advanced the concept in popular culture perhaps more than any other album. Although her success to this point derived from her sound’s relative closeness to the Laurel Canyon / Crosby, Stills, Nash & Young scene, this collection was radically different to anything she had done before, its arrangements stripped of anything remotely frivolous and presented in a bare-bones style, one which allowed the listener to feel that Joni was singing to them alone.

Having broken off her long-time relationship with the aforementioned Graham Nash, Mitchell announced a hiatus from performing in January 1970 and decamped to Europe with a flute and a dulcimer, relocating to the Greek island of Crete after a brief period of travelling and where she began to write the songs that would form Blue. By that summer, she had commenced a short but intense romance with fellow musician James Taylor, with whom she was still with in January 1971 when the time came to record the album. He later ended things when his own fame levels rocketed that year.

The biographical context is interesting, but ultimately isn’t necessary to understand or feel the undiluted beauty of Blue. It’s an album of the most exquisite and eloquent expressions of heartbreak, regret and loss in the pop lexicon, and considering how closely affairs of the heart have always been associated with folk music stretching back as far as singing and musical performance has existed, that makes it a strong contender for some of the most evocative music ever written. Mitchell’s narratives and tales are rendered in stunning detail and no small amount of musical complexity, but never in a way that makes the listening experience alienating or in any way uninviting.

Opening with the austere ‘All I Want’, framing a passionate acoustic guitar performance with a skeletal thump of percussion, Blue is defined by melancholy and regret for everything that’s missing from Mitchell’s life. The absence of connection, of immediate security, yet wanting live free of fear in spite of that absence that defines ‘All I Want’ sets the tone for the album’s general ambience. Throughout, Joni switches between the piano, her guitar and the Appalachian dulcimer as the primary musical driver for these intimate songs.

The late-night melancholy of ‘A Case Of You’, concerning the inability or unwillingness to move on after the disintegration of a relationship, is one of the album’s most well-known (and extensively covered) songs, as is the quiet emotional apocalypse of ‘River’, an expression of longing to escape heartache and to set oneself free of blame and pain. Positioned near the end of the album and completing a sequence that begins with the short, sharp essay on the emotional turmoils of love and infatuation on ‘This Flight Tonight’, these tracks represent the real heart of Blue.

‘Little Green’ is by far the oldest song on the record, dating all the way back to 1967 and concerning Mitchell’s devastation at having to give up the chance to raise a family. While she was still struggling to break through as a musician, Mitchell had given birth to a daughter alone and in secret after dropping out of art school, and in order to provide a stable family unit had married singer Chuck Mitchell who quickly changed his mind a month later, forcing Joni to put the baby girl up for adoption. Set to an unusual, meandering musical motif, her imagination tortures her as she thinks about “icicles and birthday clothes” that she’ll never get to experience with that child, and although they’re almost wince-inducingly painful sentiments they’re made palatable by the sheer beauty and poise of Mitchell’s vocal delivery.

Compared to her previous albums, Mitchell’s voice does more of the heavy lifting in these songs, the music providing a textural backdrop in which her swooping, versatile vocals provide the memorable hooks and carry the tune along. Nowhere is that more evident than ‘My Old Man’, a keening song of insecurity in which Mitchell’s voice covers drifts expertly in and out of the key in which the song’s set. The stream-of-consciousness lyrics of album closer ‘The Last Time I Saw Richard’, a lament for lost innocence, and the sleek mid-album track ‘California’ are also defined almost exclusively by Mitchell’s vocal performances, albeit set to loose musical structures influenced by the fluidity of jazz.

Among this quiet devastation, there are a couple of slightly more restorative pick-me-ups which, while they’re musically in the same vein as the rest of Blue, offer variations on the general theme. The album’s first single ‘Carey’, composed on the Appalachian dulcimer and concerning a brief romance with an American man named Cary Raditz who she met in Greece, is an elegant depiction of the abandon and wildness of new love. ‘California’, commencing the album’s second side, is similarly refreshing, concerning the pull between domesticity and the call of the counter-culture that Mitchell defined for so many people. Both songs have a certain carefree execution that’s seemingly at odds with Blue in general, yet reinforce the mood of the album.

Following the last ten or fifteen years that has seen the hallowed rock music canon being revised by a new generation of music critics that aren’t almost exclusively white males, Blue is increasingly being held up as one of the very finest albums ever made. Now, it’s always been highly regarded over the last fifty years, but its stock seems to have recently risen to an all-time high. It’s now a piece of common ground between the generations of listeners – the boomers who loved it when it first came out in 1971, and the legions of fans and artists of various ages who’ve subsequently discovered and embraced it as a foundational text for their own creativity. The most recent edition Rolling Stone magazine’s 500 Greatest Albums of All Time list put Blue at number three. Quite a turnaround for a publication that initially reacted to the record by effectively slut-shaming her, naming Mitchell the ‘Queen of El Lay’ and publishing a complex diagram of all the affairs and relationships she had with other musicians, essentially relegating her to the status of muse for male artists.

But any analysis of Blue that focusses on the autobiographical aspects – fact or fiction – will inevitably completely miss the point. It’s a completely disarming and virtually flawless expression of melancholy, and one that sounds as fresh in 2021 as it did in 1971. Countless artists, both male and female from Nick Cave and Bon Iver to Joanna Newsom, Annie Clark and Sharon Van Etten, have been influenced by Blue.

Mitchell herself reflected in 1979: “there’s hardly a dishonest note in the vocals. At that period of my life, I had no personal defenses… I felt like I had absolutely no secrets from the world and I couldn’t pretend in my life to be strong. Or to be happy. But the advantage of it in the music was that there were no defenses there either.” It’s precisely this aspect of Blue that makes it such an enduring masterwork – while the details may have been specific and personal to Mitchell, its sentiments were universally relatable, and presented in such a piercing manner that any human could be touched by it.

Listen to Blue by Joni Mitchell here via Spotify, and tell us what you think below!