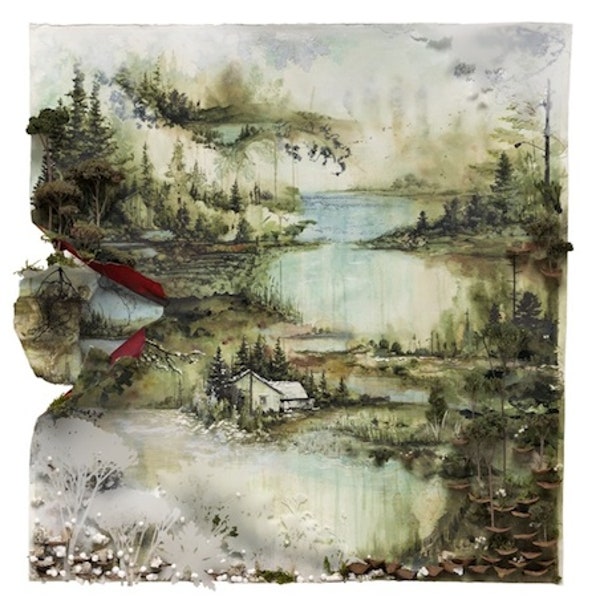 Created with a gargantuan effort to blend the more acoustic sound of For Emma, Forever Ago with Justin Vernon’s more intriguing electronic inclinations and even more experimental lyrics, Bon Iver’s second album presented us with a changed, elevated band rather than the loner artist. With a lengthy list of collaborators and a fuller, more conceptual sound than its predecessor brought, Bon Iver, Bon Iver is a trip through places real and imaginary, memories our own and foreign, strongly led by Vernon’s vocal performance but not defined by it.

After Justin Vernon’s debut album For Emma, Forever Ago, Bon Iver was still best known for its origin story, pigeonholed into romantic folk territory of heartache guitar music. Heartbroken, disgruntled indie musician finds solace and peace in his father’s cabin in the woods of Wisconsin, writing his most impactful album yet – it’s an attractive, hopeful trope that adds a sheen of authenticity and romanticism to both the album and the artist. Justin Vernon had played with many bands previously, but enjoyed only limited mainstream success, and if one would have listened solely to the media telling Vernon’s success story, it’s the escaping to the natural and the wild, to solitude, finding one’s purpose and peace without the distractions of the modern world what made For Emma, Forever Ago such an impactful record.

Such a purified narrative of the ‘isolation album’ is deceitful, yet we see it replicated and used over and over again, in literature (Henry David Thoreau, Jon Krakauer on Chris McCandless, Cheryl Strayed) and in music alike (folklore, anyone?) as a powerful device, and its power and impact is an interesting topic to discuss separately. Whilst Vernon himself didn’t particularly bolster and push this partly fantastical narrative – it is only true to an extent anyway as it’s not like there was no technology for actually putting the record together or collaborations added post ‘cabin phase’ – it lent to his perceived musical persona as an authentic folk artist who works alone, handy for the mainstream promotion of the record, certified platinum by the RIAA and forming the enduring part of Bon Iver’s mythology.

But it didn’t take long for the lone wolf persona to shift and twist into the collaborative and experimental artist that we know Justin Vernon as today. The hints of more avant-garde electronic production and experimental vocal processing could already be found in the 2009 EP Blood Bank (‘Woods’, most prominently) which followed For Emma…, blooming on Bon Iver, Bon Iver even further. That EP caught the attention of none other than Kanye West, ending in several collaborations on the rapper’s masterpiece My Beautiful Dark Twisted Fantasy. Between albums, Vernon also worked with Gayngs and Volcano Choir. The cabin fantasy in practice was no more, and whilst Bon Iver, Bon Iver had all the melancholic pandering to the bucolic in sound and visuals as did For Emma…, it was a movement towards a different Bon Iver than we saw before.

The cryptic imagery that Bon Iver is known for now was already a budding part of the brand back on Bon Iver, Bon Iver. Whilst a visual album wasn’t yet such a feat as Beyoncé made it to be, a series of tailored visuals were released for each track on Bon Iver, Bon Iver to accompany the listening experience. Mostly abstract and rooted in nature – showing plays with light, smoke, zooming in on blooms of flowers and waves crashing over one’s feet or ice melting – they weren’t extraordinary pieces of art by themselves, but rather visual suggestions of what the tracks of the record might invoke. One could say these visuals, alongside the actual music videos released for tracks such as ‘Holocene’, ‘Towers’ and ‘Calgary’, still pander to the naturalist, romanticised way of living in isolation amongst the most beautiful natural landscapes, feeding that authentic indie persona of Justin Vernon, but in their slight surrealistic quality they lend themselves to a smoother visual transition to 22, A Million with its cryptic glitch aesthetic, however still jarring. The story telling of these visuals stay abstract even if the general sympathy to the greener pastures stem from Vernon’s home state of Wisconsin.

The record cover, painted by contemporary artist Gregory Euclide, is watercolour meets details of collage and decay – the tearing of the paper, the seemingly three-dimensional moss and tree mushrooms jumping out at you, a bucolic painting of lakes and a cabin coming alive and reaching out. The elements of decay, whilst being typical of other Gregory Euclide‘s work, seem almost symbolic – a hint at how this naturalist, earthy and rustic version of Bon Iver is coming to an end, as it did with 2016’s 22, A Million.

Unlike For Emma…, Bon Iver, Bon Iver is not an album with a distinctly clear narrative or story telling arc, except for its birth/death motif and vague focus on places in the track titles, both real and invented. It has a sense of intimacy, as if we’re invited to learn something new and personal about the artist, but the muddled lens that we’re offered to view the tracks through – the lyrics – leave ample space for interpretation.

The lyrics on Bon Iver, Bon Iver mostly focus on what the collection of words and sounds suggest to the listener, rather than the ultimate truth of a track that’s confirmed by Vernon himself. This gives the record its almost surrealistic, impressionistic quality. A great example of this is the opening track – ‘Perth’ grows in intensity, builds upon itself detail by detail, introducing new instruments as if they are separate characters, illustrative of the band that’s behind the record – no longer such a lonely affair. The track’s lyrics are abstract, using at times made up words for their phonetic purposes rather than actual meaning: “To fide your name / It’s something fane / This is not a place / Not yet awake / I’m raised of make.” Named after the birthplace of Heath Ledger and rhyming with ‘birth’, this opening track sets up the birth/death motif of the record and is mirrored by the death symbolising ‘Beth/Rest’.

Most tracks suggest a memory, a time and a place specific to Vernon but in their specificity relatable to the rest of us. ‘Towers’ hints at Vernon’s college girlfriend and the twin towered dormitories that remind him of their fleeting relationship, the lullaby-like ‘Michicant’ with soft bike bells ringing (perhaps a nod to Pet Sounds) potentially hashing out youthful mistakes, ‘Wash’ being a sort of love song for Eau Claire, Vernon’s hometown. ‘Holocene’, arguably the album’s most famous track, lends itself to a more concrete interpretation, named after a bar in Portland, Oregon and a geologic era. The pre-chorus “And at once, I knew / I was not magnificent” echoes the simple realisation of one’s insignificance and flawed nature. There’s a certain sonic liquidity in the song, Vernon’s signature vocals the main character, instrumentation timidly following suit. It’s all in watercolour, both in fluid meaning and delivery. Though something must be said about the fact that after Bon Iver, Bon Iver was prematurely leaked on the internet, Vernon’s first move was to release the official lyrics to set them in stone before the misheard ones take flight, meaning even the most abstract lyrics are written with intent, rather for cool points.

Musically, the record is a wash of sound, acoustic and digital, blending synths with banjo, atmospheric interludes with stricter song structures. It’s no longer a comfortable, straight up acoustic guitar affair, with collaboration bubbling beneath the surface. It all sounds both comfortably familiar and eerily melancholic, with large, echo-y guitar riffs, march tempo drums and brass sections, making more sense than the lyrics in their referentiality and acting as signifiers of familiar moods and musical jump off points. Album closer ‘Beth/Rest’, greets us with the most familiar reference – a very familiar ‘80s synth. Symbolising death, it seems both humorous and profound, bringing us to a homey, celebratory, comfortable place after the more ice-y production on the other songs. Whilst the tone is the warmest it’s been, Vernon’s vocals are hidden under the biggest sheen of production as of yet – in retrospect a welcome hint towards Bon Iver’s third record.

As the second Bon Iver album, Bon Iver, Bon Iver makes perfect sense. A natural development from its predecessor, it still dominated coffee shop playlists but also managed to hold its artistic heft and be a fitting layover from For Emma, Forever Ago to 22, A Million. The collaborations and experimentation with vocals on this record is what laid the groundwork for the Messina, a new type of live vocal harmony synthesizer Justin Vernon and engineer Chris Messina came up with for Bon Iver’s track ‘715 – CRΣΣKS’ and the PEOPLE collective. Its melancholic, cold sound focusing on memories and how they relate to places fit in with peers such as Fleet Foxes but pushes forward enough to later on bloom into something as unexpected as 22, A Million, elevating Justin Vernon from the loner folk artist persona.

Bon Iver, Bon Iver is steeped in Americana, but without too much of its conventional signifiers, straddling the middle line with its mixture of production techniques and loose song structures, not to mention the lyricism. It’s a confident record, offering collage-like, kaleidoscopic storytelling and fluid sonic landscapes that are tight enough to be considered songs, and one that was yet another clear step in showcasing Justin Vernon’s talents as a songwriter.

Listen to Bon Iver, Bon Iver by Bon Iver here via Spotify, and tell us what you think below!