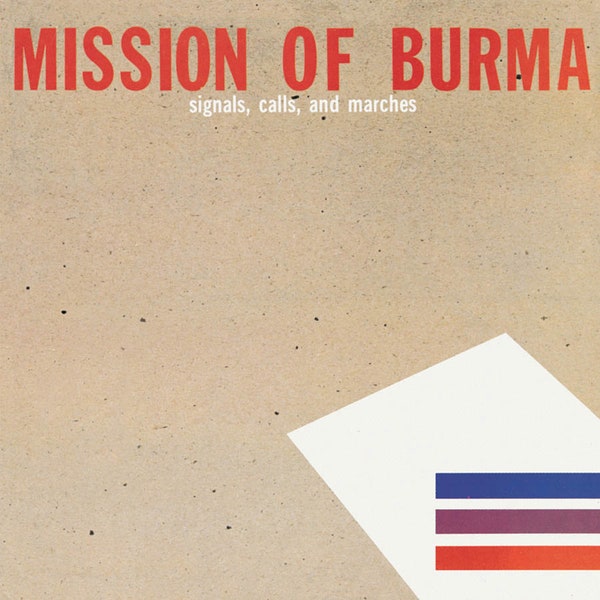 The difference between visibility and obscurity in pop music is surprisingly often a matter of timing. One illustration of this rule is the story of Mission Of Burma, so perfect it could almost serve as a dictionary definition. Forming in 1979 and dealing in an artful, noisy yet melodic brand of post-punk, their short lifespan produced music that’s been incredibly influential on a handful of well-known indie artists, but their name was all but unknown outside a handful of music journalists.

As stoically resistant to the prospect of recording anything with the explicit intention of going mainstream as Mission Of Burma were, the primary reason why they didn’t reach anything like the kind of audience they might have done was because, at the turn of the Eighties, the infrastructure that American bands like R.E.M., Sonic Youth and Hüsker Dü benefitted from simply didn’t exist yet. The nationwide, geographically disparate underground network of college radio stations, independent venues, fanzines and record stores had only just begun to be connected up – ‘indie’ as we understand it was nowhere near as well developed in 1980 as it was in the UK, a much smaller area. Therefore, outside of their native Boston and a handful of people in the know on either coast, vast swathes of America never got to hear about one of the most forward-thinking guitar bands the country ever produced.

Although their career was stunted by a combination of a lack of commercial success and serious injury, Mission Of Burma did leave behind an incredible (if small) body of work. Released in 1981, their debut EP Signals, Calls, And Marches is their best-known release, even ahead of their impressive formal debut Vs. which came out the following year. To understand the enduring appeal of the EP, and of the band’s music in general, a brief explanation of the group’s personnel and background is necessary.

Mission Of Burma’s two founding members, Clint Conley and Roger Miller, crossed paths in the Boston post-punk band Moving Parts in the late Seventies. Each brought something different to the table in terms of the group’s creativity – Conley delivered wounded, introspective but fundamentally anthemtic and accessible songwriting, while Miller approached things with a more avant-garde perspective, bringing angular, arty guitar chops to the mix. Their fundamentally oppositional styles formed the core creative tension in Mission Of Burma’s music, one which made them notionally open to radio exposure while consolidating and advancing the gains of punk. Combined with the martial drums of Peter Prescott and the live mixing and tape manipulations of their secret weapon, Martin Swope – who never performed on stage, instead adding impromptu effects to the band’s sound on the fly at the mixing desk out in the venue during performances. This made them intellectually appealing in the context of the early Eighties: the idea that what was going on onstage wasn’t what was really happening was very modern.

The punk ideal of maximalising minimalism – “strip it down as far as you can go, then do as much as you can possibly do with it”, according to Prescott – ran deep in Mission Of Burma, and represented the ideological drive behind their music which, like several of punk’s most forward-thinking acts, always sounded very different live than it did on their actual studio recordings. Taking elements of free jazz, psychedelia and other experimental strands of music and injecting them into molds of aggressive guitar music balanced between punk and pop, their live performances were astonishingly loud and were what initially fuelled Mission Of Burma’s local popularity in Boston in the absence of any promotional infrastructure by which their name might otherwise have gotten out there.

Signing a deal with local record label Ace Of Hearts, they released a single in 1980 that contained two of their most distinctive tracks, the careening new wave of ‘Max Ernst’ and the earworm punk anthem ‘Academy Fight Song’. Although the latter’s defiant and pleasingly vague oppositional lyrics made it a real crowd-pleaser, both tracks sounded unmistakably genteel compared to how they were performed live, despite being riotous balls of energy. Taking the same approach to their first EP, that of capturing the six tracks that frequently got the best reception during their concerts, Mission Of Burma released Signals, Calls, And Marches in July 1981. While the same issue was plain, the EP arguably captures the essence of the band most accurately.

Proceedings open with the band’s calling card song ‘That’s When I Reach For My Revolver’. Cribbing its title from a Henry Miller essay without knowing that the phrase was commonly attributed to Hermann Goering, it’s since become a minor punk anthem, taking the black-and-white politics of the genre and pushing it in more abstract directions, adding shades of grey, while keeping things anchored in punk’s lyrical traditions of alienation, paranoia and loss (key lyric: “tonight the sky is empty / but that is nothing new”). Plus, it still sounds incredible.

The scything, militant style of ‘Outlaw’ boasted serrated Gang Of Four-esque guitars, and the punky burst of ‘This Is Not A Photograph’ bristled with arty intelligence. Miller’s ‘Fame And Fortune’ was a relatively conventional treatise on celebrity and paranoia, going from triumphant anthem to placid outro. The EP’s final two tracks were certainly it’s most outré moments, though. ‘Red’ is arguably the most complete Mission Of Burma performance to be found – based on Swope’s two-note loop, Miller’s harmonies and counter-rhythms interact with Prescott’s percussion flourishes like a finely tuned system of pistons. The short release ends with the expansive instrumental ‘All World Cowboy Romance’, a grand musical statement based on Prescott’s stumbling drums and a demonstration of the band’s surprising range.

Subsequent reissues of Signals, Calls, And Marches have placed the ‘Max Ernst’ / ‘Academy Fight Song’ single and a brace of bonus tracks onto the front of the running order to make a more substantive snapshot of Mission Of Burma’s early career. Vs., a full studio album released in 1982, runs the EP close, containing some of the band’s densest and most inventive music – you’ve very rarely heard guitar music sound as alien as this, at least not before this point in time. They were of the American punk scene, but simultaneously stood apart from it, their obvious lyrical complexity standing out from the faster, louder, shorter tendencies of the West Coast scene.

Mission Of Burma would soon run into trouble, and not just because of the lack of wider recognition in spite of their efforts. Roger Miller had struggled with tinnitus throughout the band’s lifespan, but constantly performing at such insane volumes took its toll, despite him taking to wearing headphone-style protection for people who operate industrial drills and shotguns on top of earplugs during live performances. It meant that, for the sake of his remaining sanity, regular band life became impractical by early 1983. A short farewell tour ensued, but they disappeared largely unheralded.

However, by the late Eighties a nationwide underground scene that could have sustained Mission Of Burma during their lifespan had become much more coherent and networked – R.E.M. were covering ‘Academy Fight Song’ during their Green tour in 1988, even – and a glut of compilations and re-issues sparked a resurgence of interest in the group’s work. Certainly, there were bands like Hüsker Dü and Steve Albini’s Big Black that were keeping MoB’s spirit alive – any artist playing off the tension between complex experiments and anthemic rock had them to thank in part. In bringing in European influences to the East Coast and Cleveland styles of punk rock, Mission Of Burma “invented a whole new way to snarl”, according to the Spin Alternative Record Guide’s Rob Sheffield. Signals, Calls, And Marches is the purest testament to that vision.

Listen to Signals, Calls, And Marches EP by Mission Of Burma here via Spotify, and tell us what you think below!