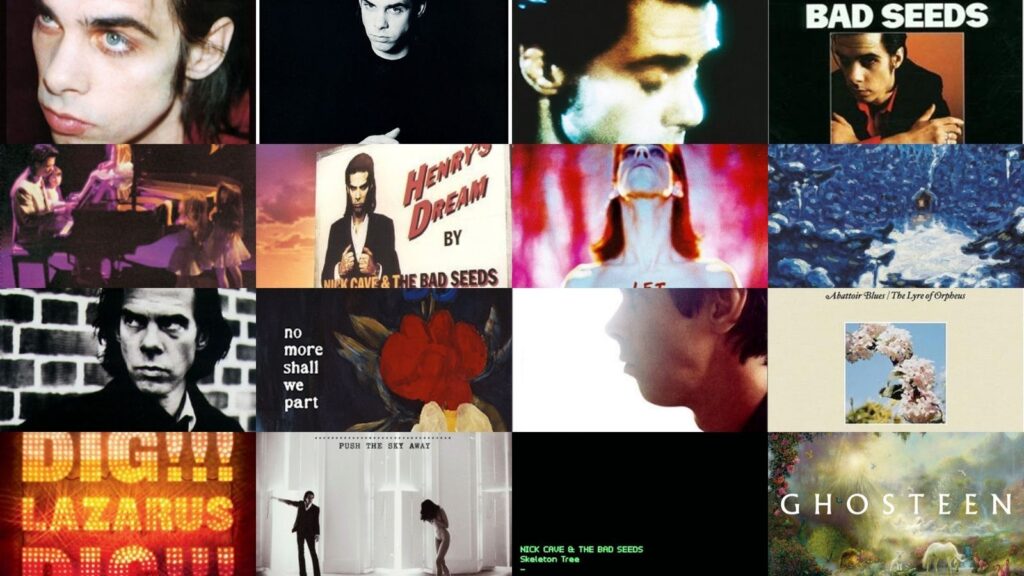 As a presence and influence in popular music, Nick Cave is an institution easily worthy of being mentioned in the same breath with the likes of Bob Dylan, Johnny Cash, Joni Mitchell, Leonard Cohen and other household names, the most celebrated songwriters in pop’s well-documented history. However, it also makes sense to think of him as one of music’s eternal outsiders, along with cult heroes like Scott Walker, Tom Waits, Mark E Smith or Michael Gira, cultivating their small but devoted fanbase and running a parallel existence to the continuum of pop, immune to the vicissitudes suffered by those who attach their fortunes to the rise and fall of trends in pop.

Why should this be? There are many different and specific instances of his brilliance, but the answer can only be understood by taking a holistic view of his career. Ranging from tender, heartbroken yet weighty ballads to thunderous, apocalyptic meltdowns influenced by everything from post-punk to experimental rock, Nick Cave’s ability to infuse his music with dramatic tension is unparalleled, in a career of pretty much non-stop highlights that’s been going for nearly four decades.

The nucleus of The Bad Seeds, the musical foil for Cave’s creativity, originally formed at school in southern Melbourne in 1973 and first taking things seriously when they called themselves The Boys Next Door, playing their first live shows in 1978. Having started with the sprightly yet lightweight Door, Door, containing few clues as to Cave’s and the group’s future, they then changed their name to The Birthday Party for three albums of chaotic, percussive noise (1980’s self-titled album, 1981’s Prayers On Fire and 1982’s Junkyard). Throughout this period they really honed their style, infusing it with the wild dynamics of experimental rock and musique concrète, and The Birthday Party’s finest material is arguably to be found on their two live albums It’s Still Living and Live 1981-82.

Taking his backing band’s name from the title of one of The Birthday Party’s final two 1983 EPs, Cave and The Bad Seeds wasted no time in getting their career off the ground, with From Her To Eternity delivered in the summer of 1984. Ever since, The Bad Seeds have been elastic in number but ever present as an entity, suspended briefly on two occasions for Cave and long-time collaborators Warren Ellis, Martyn P. Casey and Jim Sclavunos to pursue Grinderman in the second half of the noughties.

That elasticity extends to the function they perform in support of Cave’s songwriting: often an integral part of the sound and equally prominent in the mix, parrying and thrusting with his lyrics (their riotous early work comes to mind), but versatile enough to sit back, and simply provide a scenery in which their leader’s work can expand and uncoil. It is that versatility that holds the key to explaining the above conundrum, of how Cave can be thought of as both mainstream icon and leftfield iconoclast.

The aforementioned Grinderman’s two eponymous albums, Grinderman (2007) and Grinderman 2 (2010), are not included in this list even though it effectively consists of a stripped-down Bad Seeds, and neither is The Birthday Party’s material, though both catalogues are recommended listening. Instead, this will simply be a list of Cave’s 17 studio albums with The Bad Seeds. Spanning very nearly three decades, it’s seen Cave adapt convincingly to a number of radically different authorial voices that have mirrored changes in his own personal life. The street corner preacher of the mid ‘80s turned into the stick-thin, heroin-ravaged lunatic of the early ‘90s, then to the heartbroken balladeer at the turn of the millennium and the sex-mad, mid-life-crisis man of the mid ‘00s and, finally, to the settled, assured songwriter period that began with 2013’s Push The Sky Away.

Many wondered recently if Cave would ever record again the tragic death of one of his twin sons after a horrific accident in the summer of 2015. However, the following year’s Skeleton Tree reminded us that Cave is not only one of the most intriguing personalities in music (2014’s semi-fictional ‘biopic’ 20,000 Days On Earth and the intensely personal 2016 film One More Time With Feeling both attest to that) but has given us one of the most varied and consistently great back catalogues in existence that is far from done yet. Indeed, as many thought with 2019’s Ghosteen, the peaks may yet still be to come.

We believe that this list, extraordinarily difficult to compile, represents The Bad Seeds in order of brilliance. In truth, there was only one record that could even vaguely be objectively defined as ‘bad’, so the phrase ‘worst to best’ isn’t terribly fair, since any one of eight of his albums could conceivably have placed at #1.

In the meantime, if you’re a complete newcomer to Nick Cave & The Bad Seeds, check out this ‘Introduction To…’ playlist we’ve compiled over at Spotify, which combines his most accessible moments with some of his most climactic and show-stopping ones in chronological order. Happy listening!