“There Is A Crack In Everything, That’s How The Light Gets In”: An Introduction to Leonard Cohen 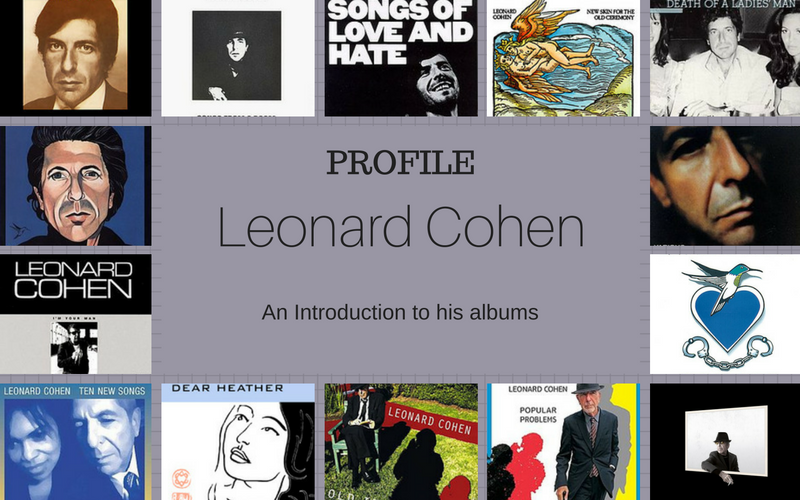 The author of fourteen studio albums spanning very nearly 50 years, as well as his acclaimed skill as a poet, Leonard Cohen was nowhere near as famous as he ought to have been when he passed away at the age of 82 in November this year.

Many people, if they know Cohen’s music at all, recognise him as the writer of ‘Hallelujah’, a moving yet modest track he wrote in 1984 which was popularised and arguably improved upon by Jeff Buckley a decade later, before being trashed by the appalling ‘X Factor’ winner Alexandra Burke in 2008.

As a lyricist, Cohen belongs in the truly rarefied atmosphere in the songwriting pantheon alongside Hank Williams and Bob Dylan. He is the songwriter’s songwriter, music’s foremost man of letters, whose influence on subsequent great artists like Nick Cave, Jeff Tweedy, Amanda Palmer and countless hundreds of others makes him one of those very rare artists whose impact is basically incalculable. It’s simply impossible to conceive of the art of songwriting in 2016 without Leonard Cohen.

There are so many facets of his work that people have been inspired by that to fully define what it is that made Cohen so enduring would take the length of a book. Indeed, Sylvie Simmons’ meticulously researched and beautifully written ‘I’m Your Man: The Life of Leonard Cohen’ is the best on the market.

But we’ll give it the most perfunctory of attempts. In all his best songs, Cohen’s lyrics are not only sharply analytical and blackly comic, but his vocal delivery is conspiratorial, particularly in his later years as his voice became a deep growl. He knows the truth, a man in touch with the intangible and deeper aspects of life itself, and is imparting that wisdom to you alone.

His music is often lazily characterised as ‘depressing’ by the ignorant and hard of thinking, but that’s fine. Nobody’s ever described him as upbeat, and the ironic nickname of ‘Laughing Len’ didn’t come about for no reason. Cohen’s music isn’t designed for mass consumption; he’s an artist one must discover by oneself. If you feel sad afterwards, so be it. There’s too many happy songs in the world anyway.

Beginning his career as a novelist and poet, Cohen moved into music in 1967 with his debut album Songs Of Leonard Cohen. He was in his early thirties when he released it, and it changed the art of the singer-songwriter entirely, translating the themes of sexual and spiritual longing into an intimate, sparse musical setting that was strikingly different to anything else around in the Summer of Love. Spending over a year in the charts on both sides of the Atlantic, its bleak subject matter influenced an entire generation of what would become referred to as ‘bedsit’ songwriters, and you can hear his lo-fidelity aesthetic alive and well in 2016 in the music of artists as diverse as Mac DeMarco, Lana Del Rey and Conor Oberst.

Cohen’s unadorned, thought-provoking style stayed more or less the same over most of the next decade, peaking with the exceptional Songs Of Love And Hate in 1971, before a rare artistic wobble occurred in the shape of 1977’s Death Of A Ladies’ Man, an ill-conceived collaboration with the legendary producer Phil Spector that resulted in a serious mismatch of styles that left listeners confused.

However, that misstep was to prove informative to the rest of Cohen’s career. 1984’s Various Positions saw him move towards a more modern sound while retaining the core sparseness of arrangements that had appealed him to his core fanbase in the first place, with subsequent records keeping him relevant as technology improved and many of his ‘60s contemporaries lapsed badly.

Despite the huge success of 1992’s The Future, which went double platinum in his native Canada as well as other territories and earning him the Canadian Juno Award, Cohen became a recluse for the rest of the decade and for most of the noughties, recording only two more albums in 15 years before financial disaster struck.

Cohen’s long-term manager, Kelley Lynch, was found to have effectively stolen millions of dollars from the singer’s accounts without his knowledge, leaving him with barely $150,000 to show for his lifetime of work. This essentially forced Cohen, now aged 73, back out onto the road to tour in order to generate income. Touring more or less constantly between 2008 and 2013 happily ended up triggering one final burst of creativity, in which he released three very well-received and dignified records between 2012 and 2016. The last of these, You Want It Darker, has become his epitaph, released just three weeks before his death.

Truthfully, Cohen is best understood in terms of individual songs rather than collections of songs on albums. A single track may perfectly encapsulate his genius, but somehow none of his 14 studio albums ever manage to capture every single facet of his musical personality, although some do much, much better than others. In chronological order, here are thumbnail reviews of those LPs which span 49 years, available by clicking on page 2 below.