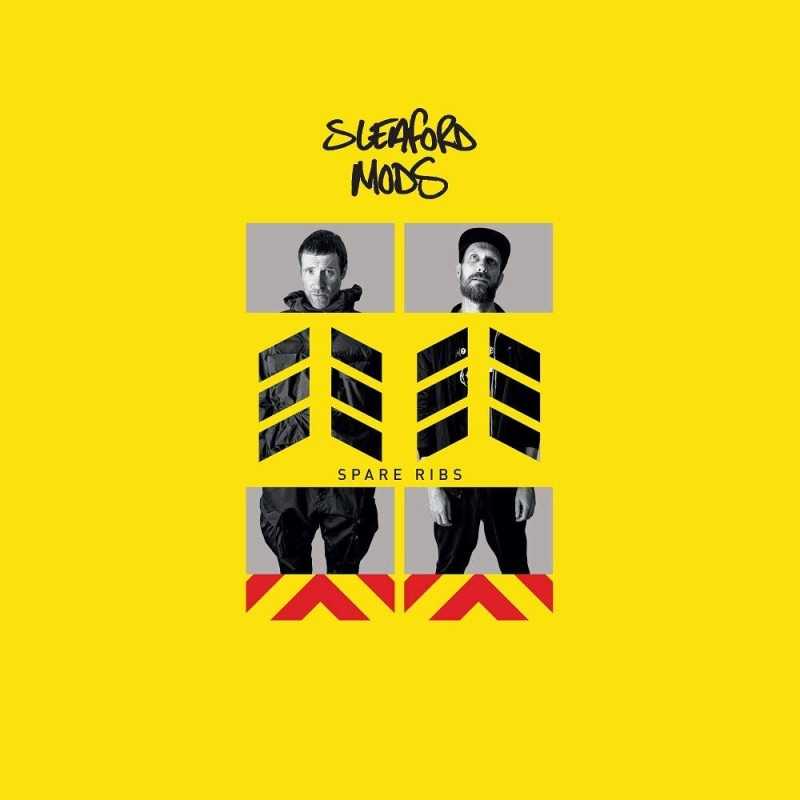 Fizzing with acidic wit and eloquent anger, ‘Spare Ribs’ is Sleaford Mods’ most sonically adventurous album so far, and one of their very best.

With each passing year, Sleaford Mods’ artistry seems ever more familiar and reliable yet more urgent, more needed than ever before. As long as the state of Britain continues to worsen, the scabrous voice of Jason Williamson will always be a beacon. The context into which their latest album Spare Ribs arrives is one of a country ravaged by Coronavirus and Conservatives, of an internecine culture war in which the basics of civility seem to be dismissed as snowflake virtue signalling and the trumpeting of ignorance a badge of honour.

In this respect, everything’s all present and correct in the way we’ve all come to expect from any Sleaford Mods album. Williamson’s lyrical cannonades brim with wit, sarcasm and anger, taking aim at inequality, materialism, music industry networking and the bovine political unconsciousness of his fellow man. As ever, it’s not the words themselves, but the nature of their delivery on record, that makes them great.

But the true revelation of Spare Ribs is the subtly expanding palette of Williamson’s bandmate Andrew Fearn. The silent partner in Sleaford Mods, Fearn’s role often goes underappreciated, not least because during live performances he appears to just press keys on a laptop and frug out with a can of lager next to Williamson’s physical, intense vocal tirades. But his skeletal rhythmical vehicles of bare beats and bass have very gradually been fleshed out with more detail as the years and albums have gone by. Having been recorded quickly under lockdown, the nature of Spare Ribs’ creation seems to have fitted Fearn’s style down to the ground – with no time to overthink anything, his economical musical backdrops throb with vitality, introducing us to some elements we’ve not heard in Sleaford Mods’ output before yet retaining the band’s unmistakable sense of identity in the process.

Take the title track ‘Spare Ribs’, for starters. Threading a taut, funky bassline through rolling waves of 808-esque beats reminiscent of Chicago house or a rudimentary version of Kraftwerk, it’s unlike anything the group have made thus far, but it also absolutely suits them. The spectral accompaniments to lead single ‘Mork n Mindy’, pairing Williamson with one of the group’s spiritual children Billy Nomates, show that abrasive vitriol isn’t necessary at all for Sleaford Mods to be absorbing. The energetic hi-hats of ‘All Day Ticket’, the queasy pricks of synth of ‘I Don’t Rate You’ and the bleeping textures of ‘Top Room’ all offer a divergence from the common perception of what the group can sound like.

Back on the lyrical front, Williamson is firing on all cylinders. The lockdown is explicitly mentioned once on the raging ‘Out There’, an attack on narrow-mindedness and privilege alluding to “panic behind the tills”. On ‘Elocution’, he addresses the same themes but specifically within the music industry (“I wish I had the time to be a wanker just like you / And maybe then I’d be somewhere lovely and warm, just like you”). What elevates them above most politically explicit acts is that Williamson doesn’t litter his tirades with time-specific references, meaning they tend to age well and remain relevant years later. Sure, they make reference to the creepy, lockdown-breaking spad on the clipped, springy ‘Shortcummings’, but the lyrical content of the track itself ensures it won’t date – themes of one rule for us, another for the elites are timeless.

Spare Ribs underlines just how much Sleaford Mods have evolved as a group, yet, paradoxically, also reminds us of how little they’ve changed in the seven years or so it’s been since they achieved wider status. On this evidence, it’s easy to see Jason Williamson and Andrew Fearn excelling at what they do for many years to come, and achieving the same kind of cult immortality as The Fall. (8/10) (Ed Biggs)

Listen to Spare Ribs by Sleaford Mods here via Spotify, and tell us what you think below!