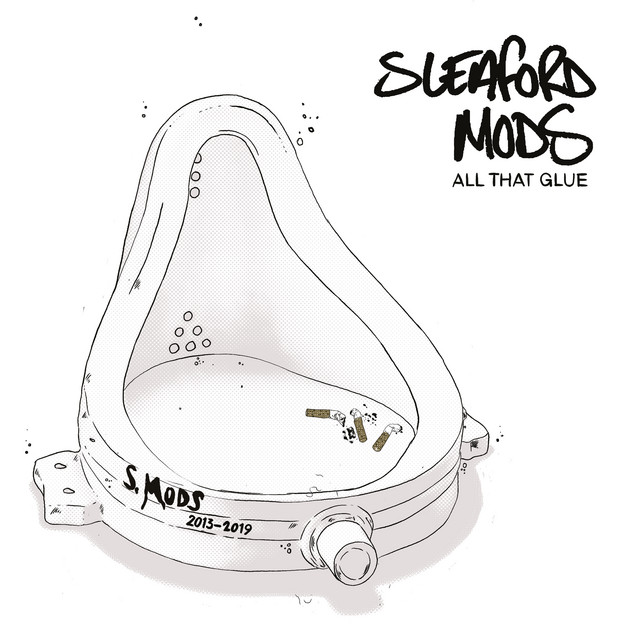 Gathering up a healthy number of B-sides and rarities among the prime cuts, Sleaford Mods’ first compilation ‘All That Glue’ is more worthwhile than your average greatest hits.

Whether you love to hate them or hate to love them, there will have been few who could have predicted the rise to prominence of Nottingham punk-rockers Sleaford Mods when they emerged into the music industry nearly a decade ago. All That Glue comes at a time which has seen the duo of Jason Williamson and Andrew Fearn emerge into a Top 10 charting band with last year’s typically no-nonsense Eton Alive and, with it, we get a chance to reflect on their unlikely success with this wonderfully compiled selection of classic early singles and little-known B-sides.

The appeal of Sleaford Mods is that you truly believe in what they are saying; they draw you into their environment and their take on austerity and the British class system with enough ferocity that I can only imagine it brings the same level of class pride as that which Gary Barlow feels when he performs yet another rendition of ‘Let It Shine’ for the Queen’s birthday (Barlow too has been the subject of hatred for Williamson during 2009’s ‘Jason Stop Wanking’). The bare instrumentation comes from the idea that they can’t afford the typical guitars and drums heard in punk, instead simply using what they can to deliver their message of class apathy and consumerist culture.

For fans of the group, there are few shocks here as the record begins with 2013’s ‘McFlurry’. The brilliantly cutting lyricism is evidenced immediately as Williamson snarls “music for the masses / I’m out classed here mate”, a jab at the lack of commercial appeal for someone from the working class not prepared to churn out pop before the group takes shots at Boris Johnson and the BRIT Awards.

There’s permeance to the classics which few lyricists have managed to find; ‘B.H.S.’ still has that enduring hatred to the collapsed chain’s owner Phillip Green as takedowns about lying on a new £100m yacht while 11,000 jobs were being lost in the UK still holds true. The fact that the Tories have been allowed to stay in charge throughout the success of Sleaford Mods has almost allowed their work to maintain its hold as seemingly nothing changes in an age of austerity – and Williamson and Fearn know this.

However, All That Glue’sappealdoes not stem from its touched-up singles, but rather the appeal comes from the nine rarities dotted around the 22-strong tracklisting. ‘Blog Maggot’ is a rambunctious and ferocious takedown on the rich, a track written six years ago still resonates today (even in spite of references to Robin Thicke) with its comical caricature of fury against the rich.

Elsewhere is the typically frantic ‘Routine Dean’, a track which could – and probably should – have made the cut for 2014’s Divide And Exit with its rampaging guitars and serves as a highlight of the compilation. During ‘Rochester’ you feel the palpable hatred for a class divide which epitomises the music of Sleaford Mods as he shouts about “bankers having pints in town” with disgust; while tracks ‘Second’ and ‘Slow One’s Bothered’ are colourful additions to the back catalogue and serve as welcome additions.

All That Glue ends with a victory lap of sorts with two of the more well-known tracks from Eton Alive see out the album in ‘O.B.C.T.’ and ‘When You Come Up To Me’. It serves as a potent reminder that nothing has changed within the group’s ethos, something worthy of praise itself when you think of likeminded comparisons (punk moved onto new wave while Mark E. Smith covered Gene Vincent) to their influences in the ‘70s.

Still, All That Glue is a rip-roaring success in which we are able to reflect on an unlikely story of success in a time where it feels few have had the chance to make it. Sleaford Mods will forever be divisive and their music isn’t for everyone – but their mantra is. Their ability to take down all that comes before them is something which few can manage today, and reminds us that anger is an energy, to quote another dyspeptic frontman. (8/10) (John Tindale)

Listen to All That Glue by Sleaford Mods here via Spotify, and tell us what you think below!