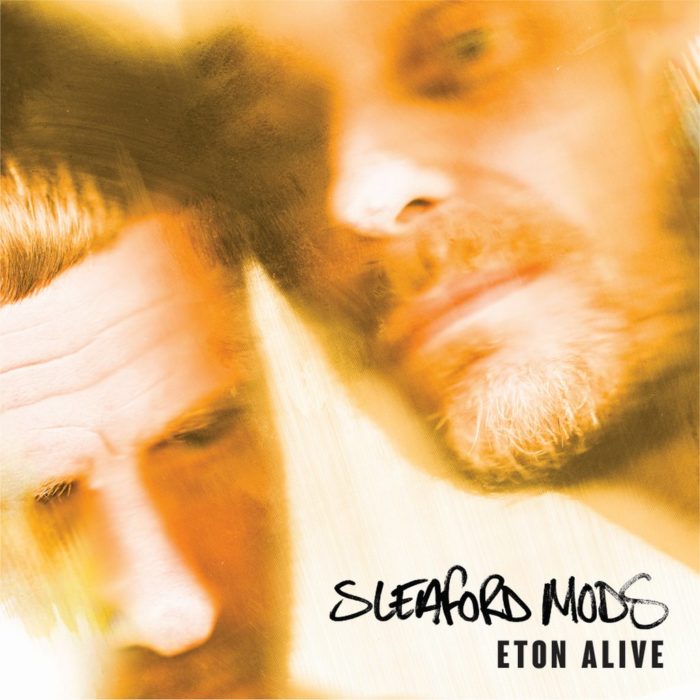 The sound of frustration and anger in 2019 put to music, ‘Eton Alive’ is everything that fans have come to expect from Sleaford Mods, but is unlikely to expand their fanbase.

Although they date back a lot further than that, it’s now been five years since Sleaford Mods released their first official album Divide And Exit, a record which was wonderfully refreshing in its brash lyricism and sound. For better or worse, the Mods’ style has changed very little since then, with the upshot that the adage of ‘if it ain’t broke don’t fix’ may be wearing thin on LP four. Eton Alive is an album which one knows what to expect, and as such may prove laborious for those who look for progression from a band; but the minimalistic guitars, Andrew Fearn’s tinny drum loops and the unpolished vocal of Jason Williamson remain as cutting as ever for those who love them.

However, it is to their credit that Sleaford Mods continue to resonate so strongly, and that their grating and sometimes divisive style hits more often than it misses. Single ‘Kebab Spider’ invokes tones of The Streets’ Mike Skinner at his best as sharp guitars and bouncing electronics provide the backdrop to Williamson’s pointed shouting “Of course we’re fucking relevant / It’s salty and it’s sweet”.

It is the permanent wit of Williamson that keeps Sleaford Mods at the forefront of the British music scene. Never one to hide an opinion, Eton Alive at one point calls out Graham Coxon (the former Blur guitarist looks like a left-wing Boris Johnson) and the desperate state that the UK finds itself in. Tracks like ‘Firewall’ and ‘Policy Cream’ discuss the state of working-class Britain and the abandonment felt by many, jagged guitars batter their way into your mind where they remain.

For Sleaford Mods are at their best when they are at their most aggressive, as has always been the case. ‘Flipside’ sees Williamson shouting himself into a frantic fury in his disdain for the political hierarchy (“If you think about it, it’s quite bleak / The faculties ain’t what they seem”) while the following cut ‘Subtraction’ is as accessible in its instrumentation as the band have ever been.

Yet for all the positives of Eton Alive, there remain the same flaws which have affected Sleaford Mods’ work in the past. Opening track ‘Into The Payzone’ rather plods along failing, to bring the album to life with the nigh-on-comical instrumentation of the keyboard proving a misstep, with Williamson’s lyrics saying a lot without saying anything of substance. Elsewhere, ‘Discourse’ misfires in spite of its fast-paced percussion, with the Dexy’s Midnight Runners influence missing the mark.

Eton Alive certainly is not going to win Sleaford Mods any more new fans, and by this point, I’m not sure that matters. The duo’s sound is like modern day brutalism; can be painfully hard to listen to at times, but its craftsmanship and quality is undeniable. When Williamson and Fearn are at their best, everything clicks and the album takes life like few can manage – but unfortunately, the twosome fails to deliver a consistent sound for the duration of the record, meaning Eton Alive is an Eton mess at times. (6/10) (John Tindale)

Listen to Eton Alive by Sleaford Mods here via Spotify, and tell us what you think below!