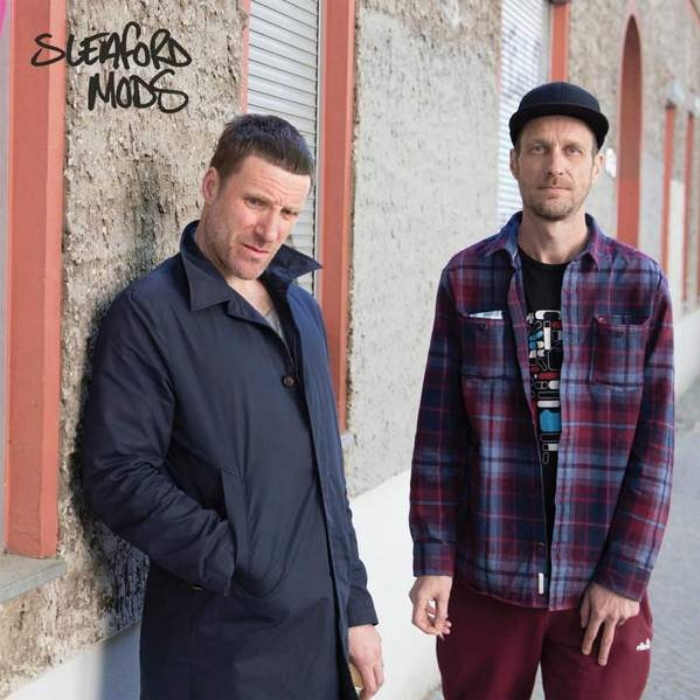 As the title of their latest EP would suggest, Sleaford Mods is in many ways a back-to-basics statement from the band after last year’s excellent full-length English Tapas. ‘Dregs’, for example, deals with vocalist Jason Williamson’s work as a bouncer, putting up with “little spoilt chaps”. A very Sleaford Mods instrumental of stripped-back drums and rumbling bass breaks down into a half-time, swung bridge, the closest the Mods have ever come to sounding ‘funky’.

‘Gallows Hill’ strikes more familiar Sleafords tones with a truly grim depiction of working class life that could have been lifted straight from one of the band’s earliest albums. Williamson’s usual relentless, amphetamine-fuelled flow is on form on this track, as is Andrew Fearn’s typically minimalist backing track featuring a whirring organ drone. ‘Bang Someone Out’ is similar in themes of working class anger, Williamson seeming to tire of the middle-class lifestyle he has been living for the last few years. In a recent interview, the frontman spoke about how he misses things like taking drugs and getting into scrapes, which is very much reflected in this track.

However, there’s more to this EP than a simple return to the band’s roots. In fact, Williamson takes one of the most radical departures from the Sleaford Mods sound to date – by singing. Whilst “talent” may be the wrong word to use, closing track ‘Joke Shop’ is a rare showcase of Williamson’s attempt at melodic vocals, as is the refrain on lead single ‘Stick In A Five And Go’.

Although better singers could probably be found in your local pub on karaoke night, this in many ways sums up the band’s ethical approach. There is no polish, no sheen of AutoTune, the songs come straight from the Mods, through very little filtering, into your ear. Who cares if nobody likes it? Certainly not the Sleaford Mods. (7/10) (Louis Marlow)