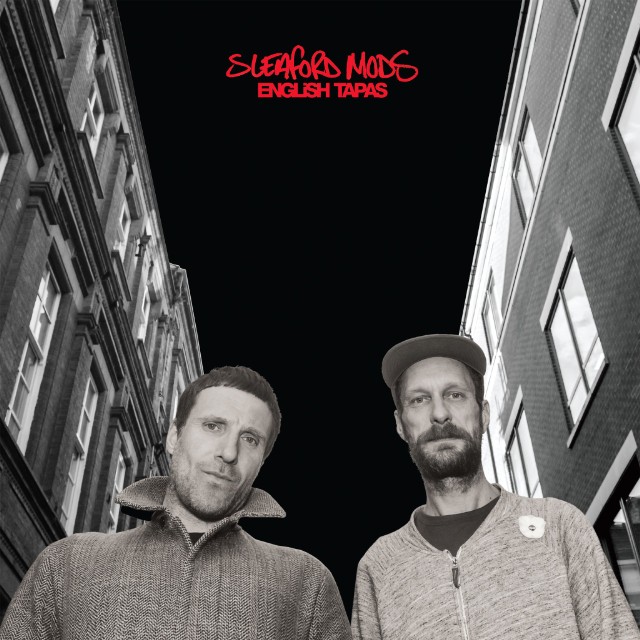 Sleaford Mods may be nine albums but they show no sign of slowing down with their tirade against all things pop-culture with ‘English Tapas’ – even if that include themselves.

The fact that Sleaford Mods remain one of the more durable bands in the UK is a statement in itself. In amongst the proverbial hype machine which churns out ‘the next big thing’ every six weeks (anyone remember Jaws?), were Jason Williamson and Andrew Fearn, who, with a rambunctious attitude and a minimalistic instrumental style, managed to break through to the mainstream, though they’d hate to admit it, in 2013.

That style still remains today on English Tapas, the first record released by the East Midlanders since their signing to Rough Trade. Opening track ‘Army Nights’ features the usual prose dialect of Williamson set to the post-punk simplistic guitars and drums of Fearn. The rhetoric for the track discusses the perils of a ‘lads-on-tour’ scenario, a theme which is constantly referred to on the record. ‘Messy Anywhere’, with its two-step melodies and chorus of “We get all messy anywhere we go late” typifies the rambunctiousness that Williamson’s lyricism possesses.

The black humour style of lyricism is as pertinent as it ever was; ‘Cuddly’ a track taking a look into modern Britain and the farcical nature of the Labour elections begins with the brilliant lyric: “I had an organic chicken it was shit”. It’s a simple line that speaks so pertinently on the elitist culture of which we find ourselves in, whilst also looking at the disparity of cultures. Whereas on ‘Dull’ Williamson delivers the line “We don’t sell our souls anymore, we do it for free” – the snarl of “dull” becomes almost ironically humorous in itself during the tracks sharp three minutes.

It’s easy to forget beyond the lyrics lie some fantastic tunes; ‘Just Like We Do’ evokes textures strangely similar to Joy Division, with a smooth, yet bracing, guitar being allowed to stand so prominently. While ‘Drayton Manored’, with its dark bass sounds and shuffling percussion, excites.

Sleaford Mods may be nine albums but they show no sign of slowing down with their tirade against all things pop-culture – even if that include themselves. English Tapas, for all of its protests against modern day Britain, speaks a lonely voice; it’s a record which is comically dark, jarring, yet glorious instrumentally and crucially another example of why Sleaford Mods are one of the most durable and vital bands in Britain today. (8/10) (John Tindale)

But what did you at home think? Did you agree or disagree? Listen here and let us know and follow us on Twitter: @StudentPlaylist!