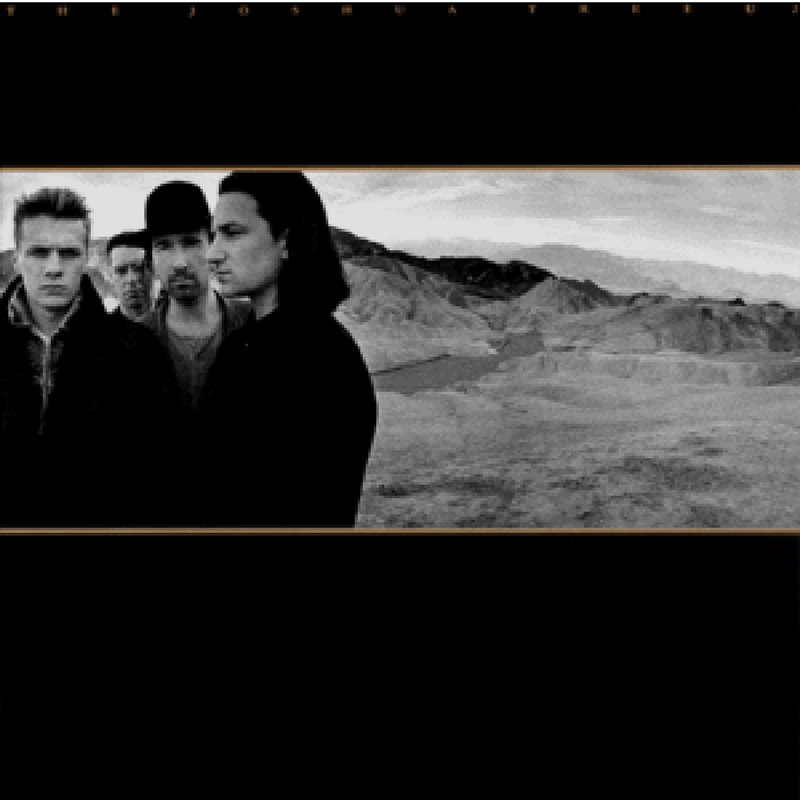 Throughout their nearly four decade-long career, U2 have experienced acclaim and discredit by the public and critics alike. However, their phenomenal and groundbreaking fifth studio album The Joshua Tree has undeniably not showed any signs of being forgotten. Mixing American and Irish politics with their natural, fluorescent musical aura, U2 are responsible of giving birth to one of the best-selling albums of the last 30 years. To date, The Joshua Tree has sold over 25 million copies around the world.

Their previous album, 1984’s The Unforgettable Fire, had been their biggest unit-shifter, making them established chart stars, but The Joshua Tree super-glued that fame as U2 went from superstars to global megastars in the space of three years. The 1987 Joshua Tree Tour is one of the most infamous tours of rock history; which lasted from April-December 1987 meant that they experienced the true ‘rock and roll’ lifestyle; touring around America and Europe and performing a whopping 109 live shows. The Joshua Tree hit home at the Number 1 spot in the US and European charts; more impressively remaining at the top of the Swiss charts for a jaw-dropping 33 weeks. So, what inspired this ultra-popular album?

It all blossomed for the group’s love for America after they spent most of their ‘80s career, up to that point, touring around the country. Bono had also been reading up on American literature by authors like Norman Mailer to supply passion and inspiration that listeners would soon enjoy hearing. The frontman also visited Ethiopia in 1985 with his wife where the worked for a month on a camp in Ajibar. He said: “Spending time in Africa and seeing people in the pits of poverty, I still saw a very strong spirit in the people, a richness of spirit I didn’t see when I came home”. The close-knit community feeling was awe-inspiring to Bono as the he wrote the lyrics for ‘Where The Streets Have No Name’ – more on that later though.

Whilst working with Steven Van Zandt’s (a.k.a Little Steven) famous anti-apartheid album Sun City (1985), Bono collaborated with guitarists Keith Richards and Ronnie Wood (of The Rolling Stones) on his contributive song ‘Silver And Gold’. When talking to them about blues, he soon realized his very limited knowledge on the genre; a lot less so than punk rock, which was a major influence, back in the late ‘70s. He knew for The Joshua Tree to be successful, remnants from a more diverse range of genres was key that also included American folk music and, naturally, Irish roots music as well as blues. For Bono, The Joshua Tree boosted his abilities as a songwriter and lyricist considerably.

Anyone who listens to The Joshua Tree, regardless of whether they like the actual music, knows that the production was done by people who knew what they were doing. The timely chemistry between producers (and also artists in their own right) Brian Eno and Daniel Lanois helped propel The Unforgettable Fire; hence why U2 were very excited to be working with them again, in a creative partnership that would endure for several future entries in their catalogue. Ultimately, the production detail and sonic architecture is second to none.

Now we get onto the actual content on The Joshua Tree, and what better place to start than the opening track ‘Where The Streets Have No Name’. As previously mentioned, Bono started writing the track in Ethiopia that contrasted with the division between people in Belfast of different class and religious beliefs due to where they lived. The Edge’s classic angelic chord progression start things off and subjected to a new depth as Adam Clayton’s bass protrudes its way in. Then Bono sings his heart out consistently throughout; with Larry Mullen beating away effortlessly in the background.

‘I Still Haven’t Found What I’m Looking For’ is empowered by the love of gospel music by Eno and Lanois which gives the song its gospel-like characteristics as Bono sings about religious doubt with “Only to be you”, implying God, and “Loose the chains / Carry the cross”, implying Jesus. If you listen to this song on the divisive Rattle And Hum, the band perform this song live with a gospel choir and Bono sings in a higher key that shakes even the strongest of musical foundations. Everything from the atmospheric majesty of the starting drum beat to Bono’s vocal ability as he hits the high As and Bs is sublime. Lanois has an emotional attachment to this song, and has even played the song with U2 live.

Completing one of the greatest opening sequences to any album in rock history, ‘With Or Without You’ is U2’s answer to a typical love song; except there’s nothing really typical about it. We all remember the timeless scene in season 3 of ‘Friends’ where Ross cheats on Rachel as this song plays in the background; very lyrically-fitting for the story of their relationship at that point in the show; justified mainly by “And you give yourself away”. However, the writing process for this song was arduous. Adam Clayton described it as “The chords just went round, and round and round. It was hard to a find a new way into it.” But a persevering intervention from Virgin Prunes (an Irish punk band) frontman Gavin Friday and an additional keyboard arpeggio written by Eno, a song was made and is arguably the highlight track on not just the LP but also, for most people, in U2’s catalogue. In addition, this song contains The Edge’s favourite chord sequence on the album and Bono’s vocals at the breakdown is remarkable.

Then as the listener hears ‘Bullet The Blue Sky’; their minds are rapidly warped into the despair of war. Adam Clayton shines through as he dishes out a dark and gloomy bassline that sets the scene perfectly for military action by the US during the El Salvadorian civil war. Bono’s use of imagery is exceptional and chaotic that can be heard by “From the firefly, a red orange glow / See the face of fear” and “See the rain through a gaping wound / Pounding on the women and children”. Even now, this is perhaps U2’s most critical and politically heavy song to date.

Meanwhile, back on British soil, coal miners were set to go to political war with Margaret Thatcher in ‘Red Hill Mining Town’. The Edge’s guitar is nothing short of scintillating packed with occasional power slides that mentally kick the listener in the face. The lyrics “The coal face cracked / The lines are long” and “See the lights go down” shows a despair a different sort that as the mining industry loses its relevancy and is gradually withered away and miners are constantly “hanging on”. Bono does very well here to distinguish between the sort of damage done to peoples’ lives here and in ‘Bullet The Blue Sky’ but yet they provoke equal quantities of sentiment.

If that wasn’t heart-breaking enough for the listener, there’s the pitch-dark ‘Exit’ for the listener to sink their eardrums into. Ever wondered how the mind of a psychotic killer functions? Clayton’s bass begins proceedings; slowly building up the vision of a wandering murderer (“He went deeper into black / Deeper into white”) that is further intensified by the repeating eerie echo in the background. As the song progresses, Bono gets louder and Mullen’s banging snare drums lay the way for The Edge’s steely and invigorating guitar at the breakdown. Allegedly, the immense potency of ‘Exit’ convinced a man named Robert John Bardo to murder actress Rebecca Lucile Schaeffer in 1989 after he stalked her three years prior. According to the court case, he mouthed the words as the song played in the court room and was sentenced to life imprisonment.

A running theme throughout The Joshua Tree is The Edge’s crisp, formidable strumming patterns embellished with delay and reverb, and the prime example here is ‘In God’s Country’. By far and away the most uplifting song on the album, ‘In God’s Country’ is linked closely with the desert background in the album cover as well as the fascinating geography and mentality of America, including The Statue of Liberty (“She is Liberty / And she comes to rescue me”).

As for ‘One Tree Hill’, this represents the loss of Maori roadie Greg Carroll who was very close to the band members; especially Bono. One Tree Hill is a volcano in Auckland in which Carroll took Bono up and that memory will forever be engraved into this masterpiece track. Apart from the imaginative lyrics, the use of major chords for such a melancholy affair sends shivers down the listener’s spine.

The Joshua Tree saw U2 expanding their existing sound to its maximum capacity, building in elements of the blues and taking full advantage of the studio technology that was available at the time. Adding Eno and Lanois into the equation made it almost impossible for the album to claim any sort of discredit by critics (but there’s always one). What makes The Joshua Tree that more significant is how out of touch the band were with musical fashions going on at the time. 30 years later, its fingerprints are everywhere, from Oasis to Coldplay to Imagine Dragons… basically, it has influenced any guitar band whose music has ever been described as ‘anthemic’.

Ever since the late ‘80s, U2 have never experienced a turkey in turns of album sales but at the same time, it’s fair to say that they will never again reach the unforeseen heights of acclaim to which their resplendent fifth album took them.

Listen to The Joshua Tree here via Spotify, and tell us what you think below!

Grandiose yet heartfelt and nuanced, Arcade Fire's 2010 album 'The…

The magnificent epitaph for Ian Curtis and Joy Division, 'Closer'…

A symbol of youthful spirit at the dawn of Thatcherism,…