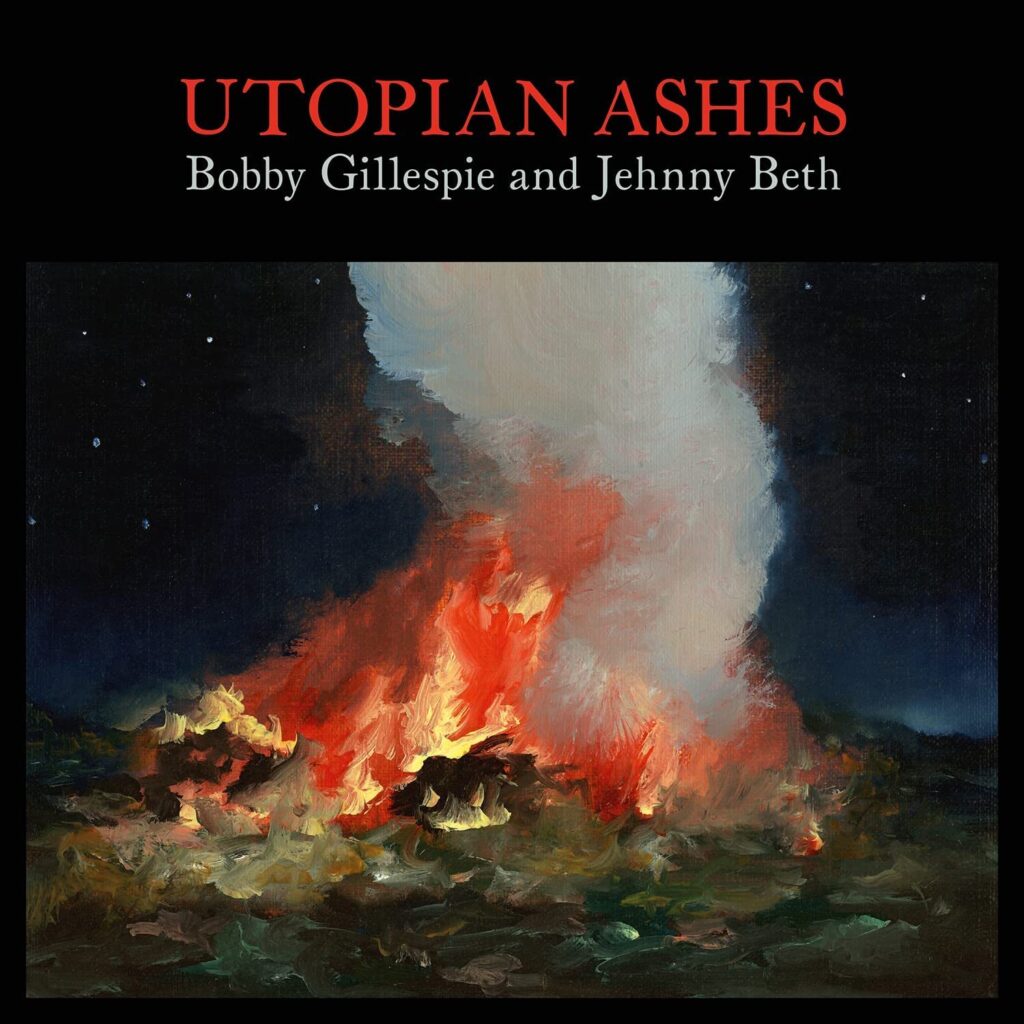 For any long-term fans of Primal Scream or Savages, hearing their respective lead singers Bobby Gillespie and Jehnny Beth sounding so restrained on Utopian Ashes – a collaboration which, on paper, sounds incredibly unlikely – might be disconcerting at first, but makes incredible sense from the moment you press play. The two first met at a Bristol festival in early 2016 and, realising they both shared a passion for country artists like Gram Parsons and Lee Hazlewood, committed to working on music together. Supported by a backing cast of Gillespie’s Scream bandmates – Andrew Innes, Martin Duffy and Darrin Mooney – plus Beth’s partner Johnny Hostile on bass, they present a searingly emotional collection loosely concerning a jaded couple’s gradual steps towards divorce.

Utopian Ashes is not the beauty vs beast collaboration in the vein of Cave and Kylie, or Mark Lanegan and Isobel Campbell, that such a match-up might imply. In Gillespie’s case, the aforementioned change is certainly more pronounced and surprising, considering that this was somebody who in his forties was still writing songs about bombing government buildings. Here, he’s genteel, poised, even mature – not adjectives you’d associate with the man behind ‘Swastika Eyes’. But, while perhaps less immediately striking, Jehnny Beth’s contributions are a revelation as well. Ranging from a seductive coo to conventional torch balladry, it’s a display of artistic versatility that’s distinct from her work with Savages and 2020’s solo debut To Love Is To Live. Both singers are as rough and refined as each other, dovetailing beautifully on songs of recrimination and regret.

Kicking off with the spectral southern soul of ‘Chase It Down’, its devastatingly plain confession of “I don’t even love you anymore” appearing just a few moments in, the pair put the listener through the emotional wringer. They often take turns at being the lead vocalist, backed up by the other, but not in a way that hogs the limelight. On the bucolic yet gloomy waltz ‘English Town’, Gillespie is front-and-centre, while on the beautiful reverie ‘Remember When We Were Lovers’ it’s Beth with a breathy and sensual vocal, backed with a subtle but tremendous Gillespie performance reminiscent of Give Out But Don’t Give Up. From a Primal Scream fan’s point of view, Utopian Ashes sees Gillespie channeling the same influences that have been latently detectable in the band’s work for a long time – their cover of Hazlewood and Nancy Sinatra’s ‘Some Velvet Morning’ from Evil Heat springs to mind – only they’re made more prominent this time.

The low-key, string-swept ‘You Don’t Know What Love Is’ and the searing heartache epic ‘Your Heart Will Always Be Broken’ is reminiscent of Gram Parsons and Emmylou Harris’s work together in the late Sixties, and are merely the obvious mid-album highlights. Despair is everywhere, but always worn lightly and never overwrought. ‘Living A Lie’, featuring a sprechsegang style from Beth, climaxes with cathartic brass but is defined by a light touch, as is the introspective ‘You Can Trust Me’. Ending things with a gasp of fresh air on the gorgeous ‘Sunk In Reverie’ is a masterstroke.

Utopian Ashes’ bruised country duet conceit works fantastically well throughout, something that’s down to the clear love for the traditions that both Bobby Gillespie and Jehnny Beth hold. What could easily have been sub-‘Islands In The Stream’ nonsense becomes genuinely affecting, and makes for one of the most unlikely yet effective collaborations in recent memory. (8/10) (Ed Biggs)

Listen to Utopian Ashes by Bobby Gillespie & Jehnny Beth here via Spotify, and tell us what you think below!