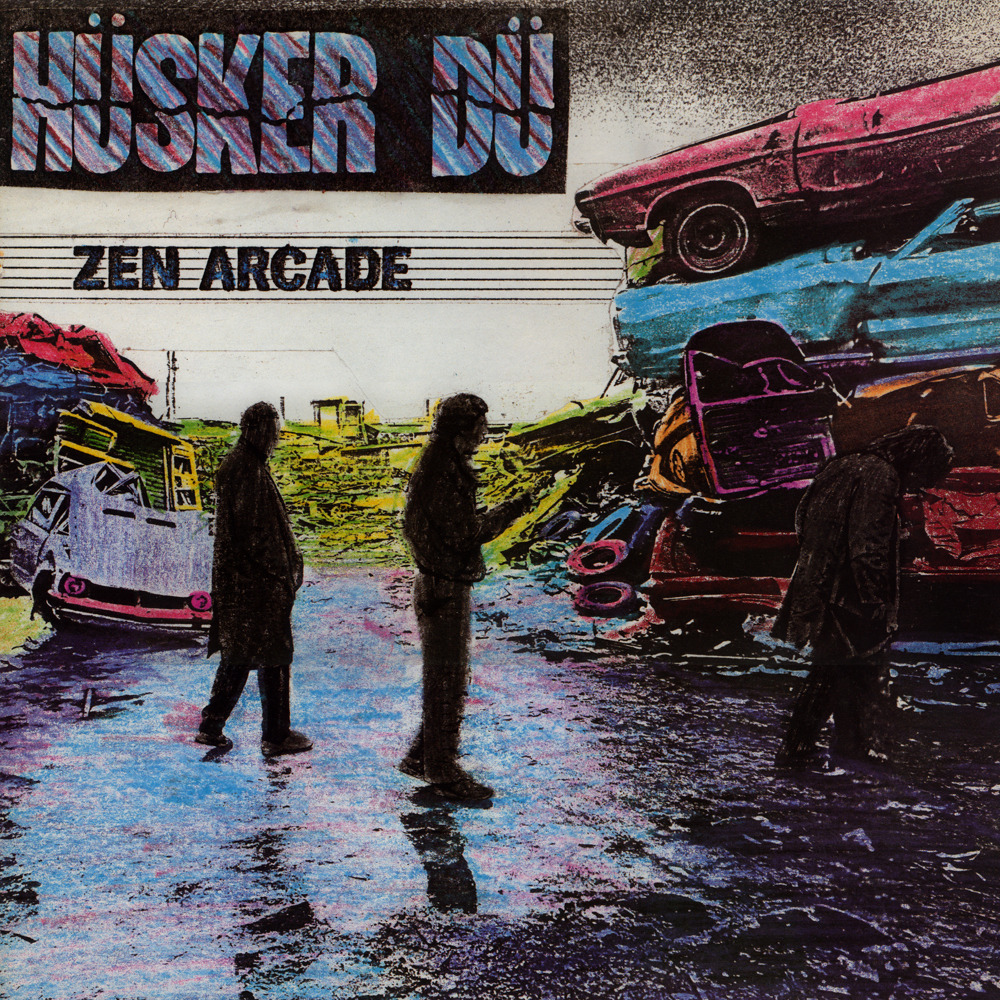 Influenced by: The Beatles, The Byrds, The Velvet Underground, The Who, MC5, Big Star, The Stooges, Ramones, Buzzcocks, Sex Pistols, The Clash, Black Flag

Minnesota three-piece Hüsker Dü, consisting of Bob Mould (vocals, songwriting, guitar), Greg Norton (bass) and Grant Hart (drums, songwriting, vocals), had formed in 1979 playing an aggressively fast brand of hardcore punk that somehow managed to retain a hint of melody. They released a mini-album Everything Falls Apart in 1983 along with a handful of singles and EPs that were notable for their unbelievable speed more than anything else. After another EP that year called Metal Circus, which nominally attempted to expand their sound into something more melodic, Hüsker Dü went back into the studio to work on a much more ambitious project at the back end of 1983.

Recorded and mixed in only 85 hours at the cost of only $3,200, Zen Arcade was different right from the off. A loose concept record about a young man who runs away to escape an abusive domestic life only to find the outside world is much worse, the group displayed a willingness to experiment that was light years away from their debut. Songs like ‘Indecision Time’ and ‘Pride’ were fairly faithful to their musical origins, but Mould and his bandmates introduced a range of elements to their basic hardcore punk template. Acoustic guitars and folk (‘Never Talking To You Again’); short piano-based interludes (‘One Step At A Time’, ‘Monday Will Never Be The Same’); psychedelia (‘Hare Krsna’, ‘The Tooth Fairy And The Princess’) and freeform hardcore punk explorations (the 14-minute finale ‘Reoccurring Dreams’).

The kitchen-sink approach occasionally resulted in some less convincing moments, but not only is the overall level of quality extremely high, it’s the key to Zen Arcade’s appeal, expanding the sonic palette of its genre and widening the musical possibilities for bands that would follow in their wake: Dinosaur Jr., The Breeders, Nirvana and The Lemonheads to name only a few. Critical reception was sky high, and the record sold out almost instantly, and could have been more of a commercial success had SST printed more than just 5,000 copies: demand went unsatisfied for several months as the label struggled to supply more.

Hüsker Dü would release a handful of equally acclaimed yet more recognisably conventional records throughout the rest of the mid-‘80s – New Day Rising and Flip Your Wig, both released in 1985, continued their dazzling form – before signing to major label Warner Bros. for 1986’s slightly less glowing Candy Apple Grey which didn’t crack the charts, despite heavy MTV plugging. Hüsker Dü disintegrated in the ensuing tour for 1987’s double-album blowout Warehouse: Songs And Stories, the increasingly tense rivalry between Mould and Hart having finally become completely untenable over a number of years.

Bob Mould embarked on a solo career before forming Sugar in 1992 for the stunning Copper Blue, which finally gave him the commercial success that had eluded him while in Hüsker Dü; Greg Norton briefly enjoyed a solo career before retiring to focus on the restaurant business; and Grant Hart formed Nova Mob as well as other projects, before the sad news of his death from cancer was reported in September 2017. With his unusual lyrical obsessions including aliens (‘Books About UFOs’), teenage alienation (‘Standing By The Sea’) or brutal murders (‘Diane’) and his more measured pop delivery in comparison to Mould’s more uncompromising hardcore ethics, Hart’s contribution to Hüsker Dü was vital in influencing a new generation of American musicians as the underground scene evolved throughout the 1980s.

Listen to Zen Arcade by Hüsker Dü here via Spotify, and tell us what you think below!