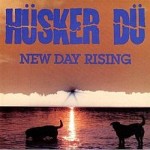 Of all the great American indie groups of the 1980s, it’s perhaps Hüsker Dü who are the most underrated. While R.E.M. became global megastars and Sonic Youth, Minor Threat and Black Flag became acclaimed names that most people will have at least heard of if you mention them, the Hüskers remain comparatively overlooked. Which is unfair, because they did at least as much as anybody else to lay down the template for what would become alternative rock in the ‘90s. If you’ve heard anything about them at all, it’s probably for their second record Zen Arcade (1984), a breath-taking double album that infused the post-hardcore speed and noise of their first release Land Speed Record and Everything Falls Apart with a degree of freeform improvisation, something that the scene which had birthed them eschewed initially, and theoretically incongruous elements like folk, guitar pop, piano, psychedelia and even jazz structures.

Zen Arcade sold out its limited pressing almost instantly as it garnered the group a ton of critical praise, but for their third studio album New Day Rising Hüsker Dü decided to re-focus, tempering their recently-discovered experimentalism with a sense of pop discipline. In a way, it’s like a balance of their first two albums, recasting the sonic adventurism into concise, pocket masterpieces. While the budget recording techniques and resultant scuzzy sound quality remain the same, this time around you there are discernible melodies, constructed from colossal waves of chiming guitars. Bob Mould’s trick was to jettison the barre chords of their previous efforts, that produced a tense and anxious atmosphere, and begin playing open and suspended chords instead. What we get is a more confident, more emotionally open sound on New Day Rising, and it is perhaps at this point that Hüsker Dü really came into their own. Zen Arcade envisioned what could be possible for post-hardcore music; New Day Rising achieved it.

After the straight-ahead trash of the opening title track, which still retains an iota of melody through Mould’s repeated screams of “NEW DAY RISING!!”, we come to the first real evidence of the musical re-orientation, Grant Hart’s dazzling ‘The Girl Who Lives On Heaven Hill’, a proper indie-pop anthem powered by arguably the catchiest guitar hook the group ever generated. ‘Celebrated Summer’ is much in the same vein, which begins with forearm smashes of trebly, melodic guitar, segueing into a wistful, minor chord interlude before resuming its onslaught. Mould’s lyrics are reminiscent of faded youth – the style in which he delivers the killer line “do you remember when the first snowflake fell / when summer barely had a snowball’s chance in hell?” would be imitated by myriad alternative rock bands and troubadours. That kind of ‘sweet pain’ paradox was also present in the exuberant, yet angst-ridden ‘Terms Of Psychic Warfare’ and the spritely, savage duelling vocals of Hart and Mould on ‘I Don’t Know What You’re Talking About’. Most surprising is the lolloping bar-room shuffle of ‘Books About UFOs’, another ‘60s-influenced Hart number that’s ecstatically happy in its own sense of teenage escapism.

Hüsker Dü remained on familiar indie territory elsewhere on the record, but these darker, harder and faster tracks served to throw the more commercially accessible moments into relief. The blistering ‘Folk Lore’ and the standard punk approach of ‘Watcha Drinkin’’ were the kind of stuff that the group had been doing in their sleep for half a decade by this point. ‘If I Told You’ is a great example of Hart and Mould’s collaborative abilities (when they actually got along), rattling along at a frantic pace. Hart’s softer voice gives the confessional nature of lyrics like “if I told you that it wasn’t easy / if I told you now would you believe me / I couldn’t convince you if I tried / you weren’t around the times that I cried” a more honest treatment than Mould’s howling would have done. The chugging indie of ‘I Apologise’ could have come from Zen Arcade. Only the messy, freeform atonality of ‘How To Skin A Cat’ lets the side down, sounding like a sloppy cast-off on an otherwise impeccably disciplined record.

New Day Rising’s reputation dwells in the shadow of Zen Arcade, but as brilliant and influential as that album was, in my view it was 1985 that saw Hüsker Dü truly begin to mine the rich vein of form upon which their legacy is founded – their ability to combine tender pop with the hardest elements of rock. It turned out to be a pivotal year for the group, as another similarly melodic and triumphant album Flip Your Wig was recorded and released in September. Both records appeared near the top of many critics’ year-end lists, which put the band on the radar of major labels. This particular compound of emotional hardcore punk would go on to influence the likes of Dinosaur Jr., Pixies, Nirvana and Green Day, and become one of the most commercially viable musical formulas of the ‘90s as so-called ‘alternative rock’ exploded. But Hüsker Dü wouldn’t be around to take the plaudits. After finally being picked up by a major label in 1986, Hart and Mould’s personal relationship disintegrated amid drink and drug habits, cancelled shows and the suicide of their manager David Savoy. They split the following year, shortly before the tour in support of their final, double album Warehouse: Songs And Stories (1987).

Check out the full album here!

For fans of: Nirvana, R.E.M., Foo Fighters, The Replacements

Influenced by: Ramones, Buzzcocks, Big Star, The Stooges, The Beatles