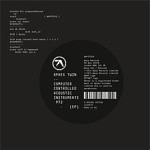 Richard D. James returned under his most notorious moniker Aphex Twin last September, sending musical connoisseurs and internets forums into meltdown. His reputation had grown enough in his thirteen year absence to land him an appearance in the UK Top 10, but Syro drew some (very minor) criticism from some quarters. Superb as it was, it didn’t give the impression that James was really pushing himself or his craft, more of a victory lap. It sounded like Aphex Twin, but it was uncharacteristically conservative at the same time. His new EP, Computer Controlled Acoustics Instruments pt 2, completely flips that sentiment around. It’s not as good as Syro, but James is challenging both himself and his audience.

James’ Warp labelmate and musical kindred spirit Squarepusher actually beat him to the concept last year – musical instruments being played by computer programme with no human execution. But where Music For Robots was technically impressive but rather cold, CCAI2 fleshes it out in much more detail, infusing the mechanics with the power to provoke thought and, at its very best, move the human spirit. The sounds are almost-but-not-quite human in that uncanny Silicon Valley sort of way. Take the stiff funk of ‘diskhat1’, whose execution is probably just beyond the possibility of human technique, or the sinister film noir-style ‘diskhat ALL prepared1mixed 13’. Things flit constantly between the impressive and the unsettling. Occasionally we get a glimpse of the man behind the mechanics: ‘piano un10 it happened’ is the kind of pretty solo piano piece that Aphex has been doing all his career. ‘DISKPREPT4’ is like a symphony of piano reflected in a distorted mirror, and the faded ambience on ‘disk prep calrec2 barn dance [slo]’ makes it sound like it hasn’t slept in a week.

So, James has rationalised the concept of ‘manufactured music’ to its logical end point with CCAI2. While Syro used pop as its source material and did unspeakable things to it, there’s nothing even remotely pop-related to the new EP, which is resolutely at the far end of avant-garde. It’s occasionally fantastic, frequently moving and always interesting. At worst, it’s like looking at an exhibition in an art gallery – you can look but not touch, listen but not really get engaged with the material. Some of the tracks, which can be as little as nine seconds long, feel a bit too much like unformed sketches and laboratory tests for CCAI2 to be placed among the pantheon of great Aphex releases, but if it’s a gateway to more full-length records made on the same basis, then it may come to be seen as a pivotal moment in his career. (6/10)