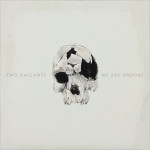 Front cover of ‘We Are Undone’

With a back catalogue of over fourteen years’ experience and now on their fifth studio album, San Francisco-based Two Gallants are one of the most consistent US rock duo’s over the last decade, in comparison to many of their US compatriots. Since their debut release The Throes back in 2004, they are a band who have been better received stateside rather than across the pond; their biggest UK hit single being ‘Las Cruces Jail’ from 2006’s What The Toll Tells.

The ten-track album is a scattered affair which combines their ability to channel a blues-influenced riff with a distinct amount of intimacy and emotion. It takes a lot for a duo to exert this kind of power, but the diversity and versatility in this record perfectly weighs up the heavy riffs with the tenderness of tracks including ‘My Man Go’ and ‘Katy Kruelly’. The bombastic opening title track is a reminder why Two Gallants’ musicianship should be admired. The sudden shift to heartfelt tracks is a little unexpected but by the end of the record the sound tails into heavier territory with ‘There’s So Much I Don’t Know’.

The over-production of the odd track or two is a slight irritant but overall We Are Undone fits perfectly into the bracket into the resurgence of heavy rock duos. Fellow rock duo fledgings including Drenge and Royal Blood have certainly learnt from the best. The filler tracks prevent this record from being considered excellent, but overall Two Gallants show why they have remained consistent for over a decade. (7/10)