REVIEW : The Districts – ‘A Flourish And A Spoil’ (Fat Possum) 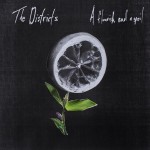 Front cover of ‘A Flourish And A Spoil’

Philadelphia’s The Districts set the heart of many an indie fan a-flutter this time last year at SXSW, with their smart, sophisticated take on rock. Though all of the members are still in their teens, their first couple of singles felt like a quick journey through the annals of rock and indie history, with a magpie approach to sound and style that suggested that they had very old heads on young shoulders. Their proper debut album (after a self-released record called Telephone) continues very much in this vein. A Flourish And A Spoil is charming and literate, and should see The Districts become bracketed with more established US indie groups like Real Estate or The National.

Rob Grote’s clever (but not smart-alecky) lyrics work on the same level as Alex Turner and Ben Gibbard, telling a story through image fragments, non-sequiturs and tonal inflections that the listener must work to piece together. You get the impression that he’s a bit of a lost soul, trying to make sense of the world around him and find his place within it. The pumping drums of mid-paced opener ‘4th & Roebling’ capture The Districts in a snapshot – lyrics that tell a narrative in abstract, delivered with tremulous, delicate vocals over lo-fi production aesthetics. The deliberately shoddy acoustic guitar work of ‘Suburban Smell’ reflects Grote’s discontent at everyday life. ‘Hounds’ sounds like a slower version of Parquet Courts, and ‘Bold’ fits in a hell of a lot in its three minutes, going from clattering drums to squalling guitar peak in about half the time that most bands would.

But it’s the slower moments that really win your heart over. The languorous, cinematic ‘Chlorine’ and ‘Sing The Song’ unwind beautifully, and give Grote the opportunity to showcase the higher registers of his voice. The near 9-minute ‘Young Blood’ is the album’s highlights, an exceptional slice of American indie with its jackhammer rhythm building up to its climax as Grote recalls a story of failed romance, ruefully singing “My ears ringing / teeth grind / “Think I’d be better off blind” she said / “So that I won’t picture it””. Other moments may not quite match this, but there’s not a single weak moment on A Flourish And A Spoil – it’s a debut that channels some pretty impeccable ‘90s indie influences, from Pavement to Neutral Milk Hotel, and forms them into something cathartic and disarming. (8/10)

Tags: A Flourish And A Spoil, Ed Biggs, review, Rob Grote, The Districts