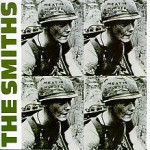 Front cover of ‘Meat Is Murder’

If Rough Trade had got their act together sooner, The Smiths’ chart positions might have reflected the true extent of their popularity. If you didn’t know anything about them and looked at the commercial performances of their singles and albums, you’d never guess that it was the body of work by the most significant British guitar act arguably since The Beatles. Just two of their 18 singles hit the UK Top 10 during their four-year existence, partly because The Smiths didn’t generally get mainstream airplay but mainly because their label couldn’t issue enough copies to keep up with demand. With better distribution, it’s entirely possible that they’d have scored chart-topping singles on at least one occasion. This isn’t what this article is concerned with: part of The Smiths’ charm was their ethos and presence on a tiny label like Rough Trade – their histories and reputations are inextricably bound up with each other. But the sole occasion that Morrissey and Marr did sit atop the British charts is with their second studio album.

Strangely, for this most beloved band’s only Number 1, Meat Is Murder is generally unloved by Smiths fans in their canon. True, it has to compete with its successors The Queen Is Dead and Strangeways, Here We Come in that mental reckoning, which are two of the finest indie albums ever, but it’s curious how generally under-appreciated it is, even in comparison to the part-rarities part-live Hatful Of Hollow from the end of 1984. Part of this is down to its odds-and-ends construction: beyond a vague concern for the state of British youth, Meat Is Murder doesn’t seem have a coherent theme running through it, despite having a provocative slogan for a title. Two of its songs had been previously released as parts of singles and EPs, and musically it ranges from tight, 3-minute rockabilly to 6+ minute sprawls. But there are a couple of compelling reasons to revisit and re-appreciate it.

Firstly, it’s the point at which The Smiths really nailed their trademark ‘jingle jangle’ guitar sound. Having been disappointed with John Porter’s murky production on their self-titled debut the year before, Morrissey and Marr hired Stephen Street to work on the new record. His production is much less gloomy, more nuanced and detailed, and allows the listener to appreciate Marr’s exceptional music-writing abilities. His great contribution to indie music was to recast the stereotypical machismo-fuelled ‘guitar hero’ as something more feminine. Combined with Morrissey’s lyrics and stage presence, which was designed to piss off people with preconceived notions of masculinity within rock, The Smiths really did signal a sea change in the industry. Street’s methods served as a much better medium for them to communicate this.

Secondly, despite the lack of an explicit theme, Meat Is Murder does feel more strident and political than its predecessor. Where The Smiths made societal observations, now they were more vocal, even if it sometimes didn’t express itself through a thematic core. Morrissey was extremely outspoken about such things as Band Aid and vegetarianism in interviews ahead of the album’s release – he even enforced a policy where the other band members were not to be photographed eating meat.

We open with the anti-corporal punishment diatribe ‘The Headmaster Ritual’, which is in similar musical territory to The Smiths but with clearer, harder production quality. Morrissey rages at his unhappy childhood, at the school system and mean-spirited teachers who “do the military two-step down the nape of my neck”. It moves into the rockabilly of ‘Rusholme Ruffians’, and keeps up the pace through to the middle of the record. ‘What She Said’ is built from a romping, rollicking Marr riff that, despite its upbeat tempo, still retains that quintessential Smiths melancholia.

The middle of the album is where Meat Is Murder really explodes into life, with the twin centrepieces of ‘That Joke Isn’t Funny Anymore’ and ‘How Soon Is Now?’ holding the structure of the album together. The former is a beautifully judged interaction between Marr’s cinematic sheets of reverb and Morrissey’s championing of the lonely and suicidal. His lyrics flit between the literal and figurative, making a correct reading of the song impossible, until he arrives with the triple-entendre “it was dark as I drove the point home”. It is an epic Smiths moment, one where Morrissey reverses his critics’ perceptions of him as a neurotic miserablist and wears them as a badge of defiance.

‘How Soon Is Now?’ is even more superlative – it’s Morrissey’s great hymn of self-justification, where he identifies with and offers hope to the shy, the nervous and the introverted. “Oh shut your mouth, how can you say / I go about things the wrong way / I am human and I need to belong / Just like everybody else does” – pure poetry, and set to Marr’s extraordinary shimmering guitar effects, which sound quite unlike anything else recorded before or since, and Mike Joyce’s hypnotic slow-dance beat, it adds up to one of the very best songs of the 1980s.

Meat Is Murder is, it has to be said, a bit by-the-numbers in a couple of instances, such as ‘I Want The One I Can’t Have’ or ‘Nowhere Fast’. Neither song is bad, merely not particularly distinguishable from anything The Smiths had done up until that point. The value of the record does depend on which issue of Meat Is Murder you come across. Despite not being part of the album’s first tracklisting, ‘How Soon Is Now?’ was included on WEA’s 1992 CD reissue – it was originally a B-side to the 1984 single ‘William, It Was Really Nothing’ but was released as a single in its own right later in 1985 due to its status as a fan favourite. However, the 2011 reissue removes it. Personally, I find its inclusion improves the record, as it serves as a useful centrepiece, a uniting thread to an album that doesn’t really have much cohesion. In any format, though, Meat Is Murder is an intriguing milestone in the development of one of Britain’s greatest bands, and the only time the charts ever reflected that greatness.