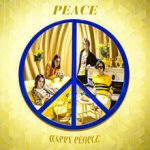 British guitar acts making second albums don’t have a particularly great record of late, but surely a band as joyously, air-punchingly upbeat as Peace might be able to dispel such fears through their sheer optimism, right? Sort of. In Love took a carefree approach, the equivalent of throwing paint at a blank canvas and creating a masterpiece in the process. It wasn’t terribly original, but its joie de vivre was enough to make our Top 10 Albums of 2013. But instead of backing themselves to pull off the same trick again, Peace have attempted to duck the problem of the ‘difficult second album’ by finessing, rather than revolutionising, their formula. The result is that Happy People is much less immediate than its predecessor, something not helped by one unavoidable fact: there aren’t as many good songs, and those that are don’t match the peaks of In Love.

The string-swept, love-lorn opener ‘O You’ seems to indicate a new anxiety, and bears a passing melodic resemblance to Oasis’ ‘Hello’ which opened the classic (What’s The Story) Morning Glory? Harry Koisser appeals in heartfelt fashion to the listener “I’m just trying to change the world that you live in”. It’s followed by the Happy Mondays-esque lollop of ‘Gen Strange’, which could easily have fit onto their debut. So far, so Peace. Three songs in, they even look to push the boat out a bit with ‘Lost On Me’, the most explicitly dancefloor-worthy song they’ve ever made, and this for a band that once covered Binary Finary’s minor trance hit ‘1998’. It’s almost entirely focussed on rhythm over guitars or any recognisably indie aesthetic, promising great things to come.

But from this point onwards, things disappointingly fall apart, as Peace rarely seek to do anything truly interesting. ‘Perfect Skin’ is a noisy clunker, as is the album’s first single ‘Money’ despite a bold melodic line. Koisser lifts an absolute stinker from the big book of musical clichés, particularly the chapter entitled ‘Tackling the Big Issues on Your Second Album’: “money, do you need it? Do you eat it when you’re hungry?”. Oh dear. ‘Under The Moon’ is track nine from basically every single British guitar album released in 1996, and ‘Someday’ really wants to be Happy People’s ‘California Daze’ but comes off like the excruciatingly earnest soundtrack to some ‘90s L.A.-based teen drama.

Fortunately, there are a handful of moments that rescue the record. The title track features Doug Castle’s distinctive shimmering guitar effects that made In Love such a winner. New single ‘I’m A Girl’ is another fantastic Peace moment, a rejection of masculinity featuring a brash, noisy guitar line taken straight from the Britpop songbook. Infrequently glorious moments like this make Happy People quite frustrating. ‘World Pleasure’ closes out the album in memorable style, its extended bass guitar-powered jam reminiscent of the crossover brilliance of Screamadelica, and a point at which both Peace’s ambition and execution is lifted to new heights.

So, Happy People is a record of highs and lows. It is decently paced, with a strong beginning and end. Just like their first album, Peace make practically no effort to conceal their love for their musical influences. However, the confidence and exuberance of In Love has been replaced by a slightly more world-weary outlook, which doesn’t completely fit their musical style. If you’re going to shell out for it, you’d be best off investing in the deluxe edition, which contains eight bonus tracks of more or less the same quality of the main album, particularly the two-minute pop-punk shot of ‘Love Me’ and the irresistible rhythm of ‘The Music Was To Blame’. Ultimately, much of Happy People feels like a holding pattern, a bit too safe as a follow-up to a debut album that suggested so much. (6/10)