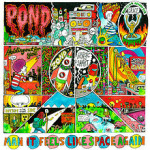 Front cover of ‘Man It Feels Like Space Again’

In retrospect, you’d have Nick Allbrook would have to be crazy to have stepped away from the Grammy-nominated Tame Impala, but while his former band is lapping up the plaudits, he’s the one busy making the music. The Perth multi-instrumentalist is able to stamp his personality much more effectively on his own project Pond, which celebrates its sixth album in as many years. Man It Feels Like Space Again is a warmly textured and schizophrenic record; languorous yet lively, sunny yet sorrowful, and a sizeable in-between into which several songs blend into a haze of psychedelic funk. At nine songs spanning 45 minutes, it’s perfectly paced and has less of a ‘jam’ feel than 2013’s Hobo Rocket.

While there may be prankster-ish titles like ‘Heroic Shart’, Man It Feels Like Space Again is an extremely articulate alternative vision for guitar music, characterised by memorable melodies, splashy cymbal-led rhythms and underlying pop soundscapes. While there are an awful lot of memorable moments, let’s at least cover the truly spectacular ones. ‘Zond’ balances heavy distortion with cartoonish synth sounds and Allbrook’s peculiar vocals. The closing title track is a cacophonous medley of intergalactic bleeps and bloops and guitar improvisation. ‘Elvis’ Flaming Star’ is an entertaining mix of the titular King, early Bowie and garage rock, while ‘Medicine Hat’ offers a Dylan-esque acoustic breather from all the sonic adventuring. Rarely has experimentalism sounded so disciplined and perfectly crafted. (9/10)