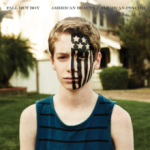 Fall Out Boy’s four year break ended in 2013 with their fifth LP Save Rock And Roll. Two years on and their new record defines how the music industry has changed since their biggest single ‘Sugar, We’re Going Down’, almost ten years ago. Considering the length of their hiatus, it is difficult not to admire the band’s longevity and very loyal fan base. Between playing festivals, they have written a soundtrack for a Disney film as well as penning tracks alongside pop sensations One Direction. The latter seems a patently obvious influence on American Beauty / American Psycho (not a double album) with the foursome opting for a tween pop-rock sound with a large dose of commercial appeal. Who wouldn’t want a piece of the 1D pie…?

The title track feels like one of their One Direction cast-offs, however, with a rather uncomfortable electronic pop mash-up. ‘Immortals’ is by far the weakest track on the album with a poorly crafted use of reverb. Unfortunately for the band this was the track written for the Disney’s upcoming picture, Big Hero 6. ‘Uma Thurman’ is the most interesting track on the album with surf-rock riffs interspersed with Tarantino-esque audio samples.

The record fails to show Fall Out Boy at their best. The other three members of the band rarely make a vocal appearance, making it seem like a Patrick Stump solo project. All of their rock credentials seem to have been cynically discarded, thrown out for a tween-pop chart appeal. The use of samples throughout tracks has freshened their sound up, but fans of their earlier work may be disappointed in the desperation of this album. American Beauty / American Psycho sounds like a band marooned, in search of a fresh sound. (4/10)