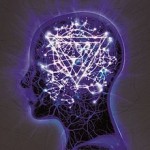 Front cover of ‘The Mindsweep’

Where to begin with Enter Shikari? A band that in essence seeks to marry post-hardcore and happy hardcore and any genre they happen upon in between, they won the John Peel Innovation Award back in 2007, possibly because their brand of ‘electronicore’ was adjacent to the then-popular ‘nu-rave’ movement. Their combination of confrontational politics, extreme sound and mind-boggling arrangements is hard going at the best of times, but four albums in to their career, their uncompromising bent towards experimentation is paradoxically starting to get very formulaic.

The Mindsweep is a mess of competing elements struggling for prominence in a blinding, garish mix. Right from the overbearing spoken-word intro of ‘The Appeal And The Mindsweep I’, the tracks have an annoying tendency to arbitrarily wander into incongruous mid- and sub-sections, rarely settling into any sort of flow. Granted, this makes for an exciting live experience, but on record the results are bewildering. Take lead single ‘The Last Garrison’, which clumsily spot-welds massive guitars with Chase & Status-grade commercial dubstep, or the screamo / thrash metal / xylophone three-way of ‘There’s A Price On Your Head’, or the leaden lumpiness of ‘The Bank Of England’. They all probably sounded great on paper, but Enter Shikari demonstrate virtually no nous in the execution of those ideas, to the extent that all the mid-song ducking and diving from one genre to the next sounds arbitrary instead of inventive. You want to shout at the speakers “STOP! SLOW DOWN! THINK BEFORE YOU SPEAK!”

Furthermore, the group’s sole lyricist Rou Reynolds has a penchant for writing lyrics that are at once impenetrably dense and embarrassingly gauche, making him come across like a combination of an eager sixth-form politics student showing off how many books he’s read (the Wikipedia entries for) and that bloke down the pub who never shuts up about the latest conspiracy theory. You simply can’t imagine, listening to lyrics like “like Socrates I graze on the slopes / of the summit of my own ignorance” (‘Never Let Go Of The Microscope’), that he has any fun at all being the lead singer of a Top Ten act. Strangely, in spite of its portentous lyrics, its rangy latter-day Prodigy rhythm actually suits them a lot better. The unexpectedly gentle ‘Dear Future Historians…’ is a late album highlight, if only because it gives the listener some time to reflect.

Altogether, The Mindsweep is very loud and vaguely pissed off with the world in a dreary teenage sort of way, but has nothing else to recommend it aside from a couple of individual moments that, at best, can be defined as ‘not bad’. Reynolds could do with realising that you can be just as subversive if you lighten up, even just a little. See Future Of The Left, Pulled Apart By Horses, Devo, who all make you ‘think while you dance’ with the added bonus that they don’t bore everybody to death in the process. Yes, Enter Shikari are trying to engage their listeners, and fair play – that’s the one thing of which you can’t accuse them otherwise – but in spite of the prodigious musicianship on display, The Mindsweep is a trying listen. (3/10)