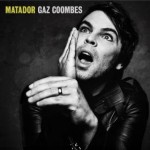 Making up one third of Oxford Britpop band Supergrass, Gaz Coombes is a million miles away from his indie roots on his second solo album, Matador. His 2012 solo debut record Here Come The Bombs saw him cut ties with his prank-happy lyrics in pursuit of a more serious side to his persona, but the follow-up makes another leap forwards in the development of his career. It feels much more complete, and with a better sense of direction.

Coombes pulls together a wide range of influences from gospel, electronic, krautrock through to melancholy synth-pop. Before the release of the record Coombes spoke of the “tender, dark and uncertain” qualities of the record, and he pulls it off while being both intimate and epic. ‘Buffalo’ and ‘20/20’ are perfect examples of these, highlighting Coombes ever-impressive vocal range. Elsewhere on the record ‘The English Ruse’ offers a nod to David Bowie with synth-crossed motorik rhythms. ‘Detroit’ and ‘The Needle’s Eye’ are the most rueful tracks on the record with troubadour-esque delivery.

The highlight of the record is ‘The Girl Who Fell To Earth’ which, devoted to his autistic daughter, offers up the superb line: “How I wish you could start over”. Matador is a long way from the anthems of Supergrass but this record shows that Gaz Coombes still knows how to construct a fine pop track. It’s just a little less obvious, and the listener has to dig deeper into the lyrics. While it takes a dip towards the end, fans of both Gaz Coombes and Supergrass will see this as a pleasant comeback from the frontman. (7/10)