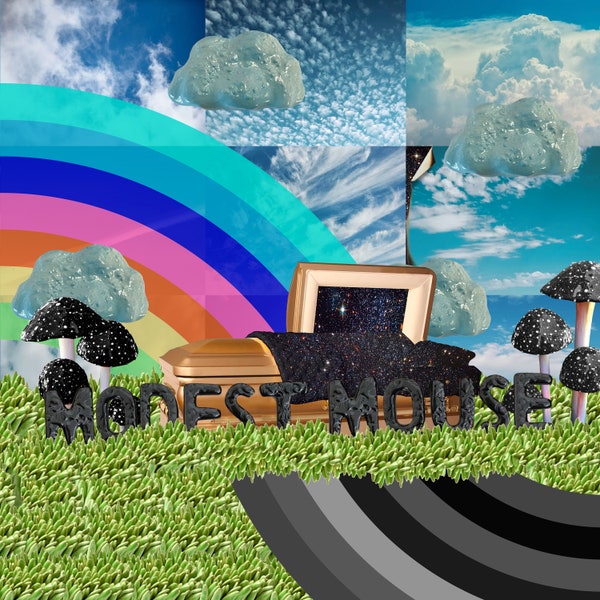 ‘The Golden Casket’ represents a partial rediscovery of Modest Mouse’s (and Isaac Brock’s) identity after the debacle of ‘Strangers To Ourselves’.

The Golden Casket is the latest album by indie-rock phenomenon Modest Mouse. Formed in 1992 in the Pacific Northwest by lead singer/guitarist Isaac Brock, drummer Jeremiah Green, and bassist Eric Judy, they became one of indie rock’s biggest success stories, going from playing basements at Seattle house parties to platinum, Billboard-topping albums and multiple Grammy nominations in their first fifteen years or so together, and they’ve persisted for nearly that timespan again – although unlike their Nineties indie-rock contemporaries, the band’s critical acclaim has not considerably diminished, something perhaps explained by the paucity of their formal album releases.

The Golden Casket is just the band’s seventh studio album, arriving six years after their previous record Strangers To Ourselves, a record which, appropriately for its title, was a low point for the band both critically and commercially, suffering almost from a lack of identity. On the other hand, The Golden Casket is much more in line with the band’s earlier work and sees the band be return to being quirky, exhilarating, passionate and most importantly fun while being relaxed and mellow.

The record starts off with ‘Fuck Your Acid Trip’ where Brock talks how he’s had enough tripping and wants to go home, a theme the band seems to be going for the project. Sonically, the instrumental switch-up from to chill acoustic strumming for the chorus will definitely make your brain tick, and represents a spirited start for the album. This track is one of some of the most bizarre, snarky tracks such as ‘The Sun Hasn’t Left’ and ‘Transmitting Receiving’ which steer the furthest from the band’s usual sound with exciting electronic white noise, trumpets, echoes, strobing guitars and glitching backing vocals. Modest Mouse crosses all boundaries of the original indie-rock genre it was boxed into, erasing them with more experimental flavours scattered across the album. Brock’s psychedelic, repetitive lyricism feeds into The Golden Casket’s dark thematic paranoia of technology and the future, which is ironic, as these tracks feature more modern instrumentals.

For a career that spans decades, no music critic has successfully managed to categorise Modest Mouse’s sound, which is a testament to how brilliant and diverse the band’s artistry has been. This creativity has been the driving force for their success and the moment they stray from this credo, they lose their charm. In the case of this album, while the instrumentation is more emotive, zanier and miles better than Strangers To Ourselves, but the band lacks somecreative direction and passion that limits this project’s potential. For example, the lyrical content is not as provocative, some songs drift and feel a bit awkward, and the music can feel a little derivative. But, for any postmodern dreamer, The Golden Casket is an introspective journey worth taking. (7/10) (Aryan Agarwal)

Listen to The Golden Casket by Modest Mouse here via Spotify, and tell us what you think below!