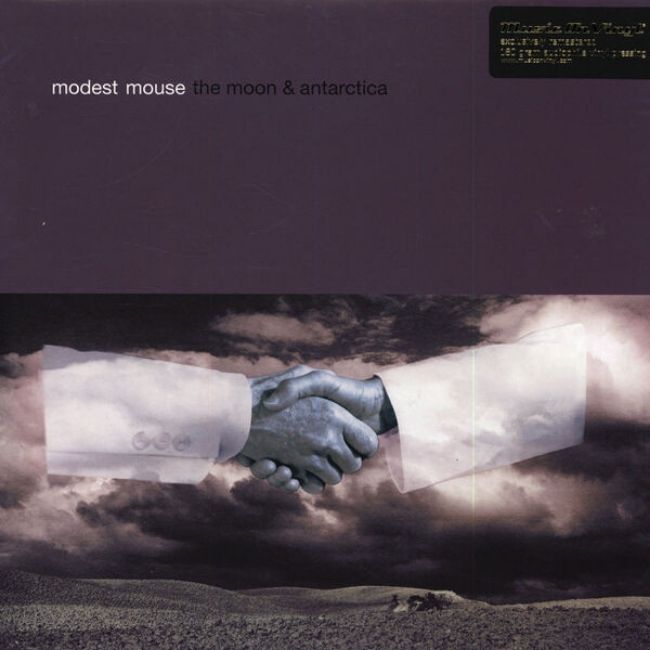 Released in the summer of 2000 to only minor commercial success but avalanches of critical acclaim, The Moon & Antarctica played a key role in the gradual evolution of Modest Mouse from heroes of the independent scene to unlikely chart-topping stars in the space of a decade. Their third album overall but first to benefit from something approaching national coverage in America, it’s a crucial bridge between two distinct eras for the band – the beloved alt-rock underground heroes of the Nineties, and the platinum-selling indie stars of the following decade.

Having quickly amassed and consolidated a feverish underground following the second half of the Nineties, with two albums released on the independent Up imprint (1996’s This Is A Long Drive For Someone With Nothing To Think About and 1997’s masterful The Lonesome Crowded West), on top of a number of EPs and singles, Modest Mouse were signed by major label Epic. Fans were initially concerned about what this might mean for the group’s creativity – American indie bands signing to majors had a checkered history at this point – but their creative engine Isaac Brock, whose idiosyncratic lyrical style and alternately intense yet detached vocal delivery was the central draw, assured their followers that “I don’t think the new album is at all overpolished or anything. We spent more time getting crazy sounds than making things sound polished.”

Considering that this was their major label debut, Modest Mouse were fortunate (to the extent that many other bands are not) to be allowed fairly free reign in the studio. Twenty years later, it’s hard to conceive of a band from an independent background to use a major label’s dime and be allowed to come up with an album with no obvious singles like The Moon & Antarctica. Indeed, no CD or 7” singles were released from it, and no music videos were made. Nevertheless, it was the first Modest Mouse album to chart in the main Billboard 200, and was a harbinger of more conventional commercial success to come later in the Noughties.

With its title taken from a reference to sci-fi cult classic Blade Runner, where Harrison Ford’s character Deckard reads a newspaper whose headline is “Farming the Oceans, the Moon and Antarctica”, the album opens with ‘3rd Planet’, one of Isaac Brock’s very finest songs to this day and the kind of track that makes you anticipate a portentous thematic song cycle. It’s a bolt of awareness illuminating a fog of unknowing, as if Brock finally resolves all of the fragments of existentialism, emotional pain and drug-fuelled madness that had always been such a major part of the Modest Mouse aesthetic, at the same time making sense of the essential loneliness of humankind’s existence in the universe. If that sounds like ‘3rd Planet’ is a bummer, it’s not – merely, it’s an overture that captures part of the essence of the rest of the record.

From here on, The Moon & Antarctica resolutely refuses to be pinned down, yet it cleaves coherently and consistently to a much grander vision for their music than Brock and his bandmates (at this point, Jeremiah Green on drums and Eric Judy on bass) had ever attempted before. With Brian Deck of former touring partners Red Red Meat behind the production desk, they add all manner of layers of sound to the mix, ranging from raw guitar textures to treated bells, keys and strings to achieve a head-spinning listening experience, one that immediately strikes you as impressive and guarantees the revelation of something new on multiple listens. It’s very difficult to feel as though you’ve got a complete oversight of The Moon & Antarctica at any one time, no matter how often you listen to it, but that only keeps you coming back.

Predominantly, the music seems to conjure up images of cold, loveless and alienated cityscapes set at some undefined time in the near future. The endless, lonely vistas evoked by ‘The Cold Part’s moody ambience and the clean, quiet execution of the spacey guitars in ‘Gravity Rides Everything’ are the most typical and representative moments. The edgy, scuffed rock of their first releases is downplayed somewhat in favour of a more acoustic emphasis, heard on the likes of ‘Perfect Disguise’ and ‘Wild Packs Of Family Dogs’, but a central sequence culminating in the epic ‘The Stars Are Projectors’ ensures the band’s tendency to veer off the path and explore sonic tangents is intact.

In contrast to what happened to others before them, Modest Mouse lost nothing in the transition to the majors. In fact, they just physically sounded better, their original lo-fi charm accurately transposed to a more grandiose canvas. That slight tonal shift in musicality in mirrored in the album’s lyrical themes. Brock is introspective on most of The Moon & Antarctica, repeatedly coming back to questions of mortality and the afterlife (“everything that keeps us together is falling apart” is one of the first lines of the entire album, musing on the human condition) and other grand themes. However, he doesn’t forget his trademark snark – the acoustic-based ‘Lives’ goes “You were the dull sound of sharp math when you were alive / No one’s gonna play the harp when you die.”

While many tracks from The Moon & Antarctica got rotation on college radio, notably ‘3rd Planet’, breaking the band into the mainstream proper wouldn’t happen quite yet. It wouldn’t be until 2004’s Good News For People Who Love Bad News, spearheaded by its poppy, infectious lead single ‘Float On’, that Modest Mouse would become visible to the public at large. Their next album, 2007’s We Were Dead Before The Ship Even Sank, reached the top of the Billboard charts and featured none other than ex-Smiths guitarist Johnny Marr in the band. Since then, new music has been frustratingly short in supply, with only 2015’s satisfactory Strangers To Ourselves album and a handful of recent stand-alone singles emerging in 13 years.

But The Moon & Antarctica played an important part in their career arc. Not only did it manage the leap from the indies to the majors effortlessly, it also arguably improved on Modest Mouse’s existing sound. It was the kind of wildly ambitious roadmap, a projection of a frontman’s hopes and fears, that are increasingly common occurrences in the modern indie scene. Titus Andronicus’ Patrick Stickles, DIIV’s Zachary Cole Smith and Car Seat Headrest’s Will Toledo all owe a stylistic debt to what Isaac Brock was attempting here.

Listen to The Moon & Antarctica by Modest Mouse here via Spotify and tell us what you think below!