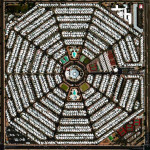 Front cover of ‘Strangers To Ourselves’

A 22 year career has seen Modest Mouse go from fuzzy indie rock in the early ‘00, through to a sea shanty influenced rock and now, yet again, a new blend of deranged pop. Johnny Marr’s contribution to the 2007 record We Were Dead Before The Ship Even Sank was firmly underestimated and it helped pull in a US number one record as well as over half a million sales. The band’s long-awaited sixth record has been roughly the same period of time as between their 1996 debut-proper This Is A Long Drive For Someone With Nothing To Think About; and 2004’s mainstream-bothering Good News For People Who Love Bad News. In between those records, they got to grips with many styles and their frontman Isaac Brock has remained (some would say) an excellent, consistent songwriter. But think about what’s changed in the meantime. The way we consume and hear about music is totally different to 2007: Spotify wasn’t a thing; MySpace still was; Twitter barely existed; Facebook was in its early days; the indie scene has profoundly altered, relying more on electronics than guitars. And yet, Modest Mouse has remained preserved in the indie public’s consciousness while all around them has changed.

So now, at long last, they give us Strangers To Ourselves, a typically deranged effort which challenges the riff-centric pop sensibilities of the last album. Their sixth album is somewhat less accessible than we might have hoped, but there are hints of Marr’s legacy on the off-beat rhythm sections that interact with insistent harmonies. While ‘Float On’ and ‘Dashboard’ were big hits in every indie disco, there is very little hint of a similar moment on this record. Over the past eight years there have been numerous false reports of experimental collaborations with the like of Nirvana’s Krist Novoselic and hip-hop star Big Boi. In light of these rumours, Strangers To Ourselves sees a shift towards the typical experimental and as expected Modest Mouse moved with the times and headed towards a slight electronic sound. It’s certainly not a distinctive, over-loading shift in style but it’s noticeable.

Brock still has his distinctive yelps and shouts throughout the 15-track album. His eccentricities run wild throughout with references to UFOs and a murder at a motel, amongst numerous brilliant and bizarre tales. ‘Lampshades On Fire’ combines the jittery guitar hooks of early Modest Mouse with Brock’s idiosyncratic one-liners and talent for storytelling. ‘Pistol’ is one of the band’s most unusual tracks ever, opting for a funk-influenced backdrop with an almost Nick Cave-esque vocal performance from Brock. The track misfires slightly, but it’s entirely forgivable. ‘Ansel’ and ‘Sugar Boats’ follow in a similar experimental pattern giving a distinct nod to the band’s early years, but adding a stomping guitar riff with an undercurrent of moody synth pop. However, as Strangers To Ourselves wears on it becomes less impressive musically. Closer ‘Of Course We Know’ is distinctly humdrum, where previous Modest Mouse album finales have traditionally been showstoppers.

Strangers To Ourselves is a typical Modest Mouse effort, a record only they could make, safe and pleasantly engaging. However, that’s about all there is to report, and in the context of their past, that conclusion is a tiny bit disappointing to be forced to make. This doesn’t make it a ‘disappointing record’ in itself but, after the halfway point, you know what to expect: something you ought not to be able to say about a Modest Mouse record. Then again, you could spin this as a positive – it is certainly familiar in its atmosphere and relatively consistent in its quality. In the UK, the pop sensibilities of ‘Float On’ and ‘Dashboard’ brought them considerable attention, but if you imagine a swing-o-meter between pop and avant-garde, this record would certainly be leaning toward the latter. (6/10)