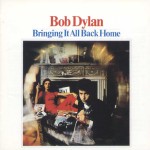 Front cover of ‘Bringing It All Back Home’

It may not seem like it sometimes, but there’s a good reason why some people go on, and on, and on about Bob Dylan: it is quite impossible to overstate the influence he had upon the sound and structure of popular music. He was arguably the first pop musician to use the album format as vehicle to make an artistic statement – before 1964, the album was more or less the exclusive domain of jazz artists, with pop singers and rock ‘n’ roll bands preferring the single format. For even the biggest pop stars, an album release was simply a collection of songs that they wanted to play for you, with few (if any) original compositions. Dylan’s 1964 masterpiece The Freewheelin’ Bob Dylan was one of the very first to change that, signalling the start of his imperial phase, but it was made firmly within the folk genre that had spawned him. A little over a year later he released another, even bigger game-changer, Bringing It All Back Home.

His fifth album was the start of Dylan’s ‘electric period’, which was seen as a controversial betrayal of his folk roots at the time. His performance with a full band at the 1965 Newport Folk Festival has passed into legend. Dissension in the ranks was very quickly replaced by a realisation that a truly great artist was emerging from his shell and choosing his own direction. By 1964, Dylan’s lyrics were already becoming more and more surreal, and it seems that a meeting with The Beatles on their autumn tour of the States that year was the catalyst for a revolution in both artists’ music. Though it’s of a standard length, Bringing It All Back Home is a kind of double album in terms of the distinctly different moods of the two sides. Side One consists of songs (mostly) played on electric guitar, built on twelve-bar blues and reliant upon rock ‘n’ roll, while Side Two is (again, mostly) folk guitar-based, albeit containing the three most ambitious songs Dylan had attempted thus far.

The first side opens with ‘Subterranean Homesick Blues’, a totally dazzling display of Dylan’s lyrical prowess, set to a raucous, ramshackle electric guitar rhythm cribbed from Chuck Berry’s ‘Too Much Monkey Business’. He adopts a mesmerising, ranting style, as powerful political and social slogans emerge from a series of non-sequiturs (like “don’t need a weatherman to know which way the wind blows”). A famous video clip of Dylan holding up key phrases on cue cards and throwing them away, positing himself as a master of words, able to casually dispensing and toying with language, sealed the song’s legend. Rock would not be so completely revolutionised until the Sex Pistols in 1976.

After such a fantastic opening, you’d think the rest would pale by comparison, but Bringing It All Back Home has at least six other moments of similar quality, four of which take up the whole second side. The timeless ‘Mr Tambourine Man’ begins the acoustic ‘half’, a quite stunning piece of non-linear surrealism that sounds very different to the hit cover version that The Byrds recorded the following year. It’s an endlessly cryptic song, whose stream-of-consciousness lyrics are almost entirely open to interpretation, imbued with all kinds of imagery inspired by poetry and literature. Perhaps more than any other Dylan song, its truth is not objective – it’s what you, the listener, bring to it that shapes it in your experience. ‘Gates Of Eden’ is of a much more normal construction and could have come from any of his previous records. Full of dense apocalyptic imagery, each of the nine verses describes a different character on a doomed search for a false paradise, reinforced by the repetition of the song’s title at the end of each verse.

‘It’s Alright Ma, I’m Only Bleeding’ is a seven and a half minute protest song of the kind Dylan had long since mastered, targeting commercialism, warmongers and false consciousness, only this one forced the listener to analyse themselves as well as the constructs of the outside world. The bittersweet closer ‘It’s All Over Now, Baby Blue’ provides a little bit of levity in a dense second half, describing that point in the end of a relationship where you have to walk away with as much dignity as possible.

Back on the electric ‘half’, the impenetrable ‘Maggie’s Farm’ is an obvious highlight, seemingly a tale of slavery doubling up as a metaphor for life in the USA, the military-industrial complex, or even Dylan protesting about protest songs and the expectations of his fanbase. At the end of the first side, ‘Bob Dylan’s 115th Dream’ is another surreal, non-linear rant whose target appears to be the discovery and creation of the American state. It’s very similar to ‘Motorpsycho Nitemare’ from his previous album Another Side Of Bob Dylan, apart from it’s played on electric guitar and the lyrics are a lot more impressive.

When Bringing It All Back Home is not busy being original or savagely insightful, it is at least pretty to listen to. ‘She Belongs To Me’ is a beautiful mixture of the record’s twin folk / electric leanings; ‘Love Minus Zero / No Limit’ appears to be about his wife Sara Lowndes, the woman who would inspire Dylan’s best-selling album a decade later; ‘Outlaw Blues’ and ‘On The Road Again’ both use bluesy, upbeat rock structures and help Dylan articulate his desire to get away from his folk roots.

So, while it isn’t a double album, it’s certainly an album of contrasting personalities – electric and acoustic; personal and political; and with a fair amount of fantasy and surrealism injected into proceedings. Bringing It All Back Home not only saw Dylan fuse folk with rock ‘n’ roll and change the course of music history, it was also his most complete statement to date. It’s frequently cited as one of the finest albums of all time, particularly by the traditional rock publications like Rolling Stone. Later in 1965, Dylan would surpass himself yet again with Highway 61 Revisited, arguably the finest album he ever made, and the following year would actually invent the concept of the double album with Blonde On Blonde.

But those equally iconic records are denser and more complicated than this, which is very accessible by comparison, an ideal starting point for those wishing to get better acquainted with his vast catalogue. Anybody who has even a passing interest in guitar and folk music will find Bringing It All Back Home a fascinating document that has aged very well, even over half a century.

Check out the full album here!