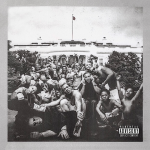 Front cover of ‘To Pimp A Butterfly’

Arguably the most anticipated, talked-about and hyped-up album of 2015, To Pimp A Butterfly has an awful lot to live up to. Following a well-received debut, 2012’s good kid, m.A.A.d city sold nearly 1.5 million copies in the US and set up Kendrick Lamar in a great lineage of rappers, the heir to Dr. Dre, 2Pac. As such, he’s now got the same weight of expectations on his shoulders as the much more spotlight-friendly and divisive Kanye West. Originally feted for a March 23rd release, To Pimp A Butterfly appeared on Spotify a whole week ahead of schedule – a fuck-up, or an attempt to wrong-foot everybody with a Beyonce-esque surprise rollout? Much media attention initially focussed on that question, until everybody realised a day later that that was the least interesting thing about the new record. Kendrick delivers a textbook-worthy example of how to follow a big record the right way: it’s sufficiently different, yet every bit as excellent.

Just like good kid…, Kendrick retains his tendency to totally change the feel of a track halfway through, making the whole album feel like a suite of songs, an experience that has to be listened to in its entirety rather than broken down via shuffling and playlists. In interviews running up to the album’s release, he’s spoken of how he’s been influenced by the funk and soul music of the ‘70s. There are fewer up-to-the-minute musical reference points than there were on good kid…, but this is an expression of the artist’s desire to make something that’s less likely to sound outdated in a few years’ time, heading straight for classic lineage. We heard this on last December’s teaser single ‘i’, a spectacular party-starter with a social conscience, and we get it straight away here. Right from opener ‘Wesley’s Theory’, which guest stars George Clinton and uses a vocal clip from the 1974 blaxploitation movie Every Nigger Is A Star, you can tell that both internal and external pressures, fame and social injustice, are weighing heavily on Kendrick’s mind.

The grey, forbidding ‘Institutionalised’ has deeper meaning beyond the obvious ‘prison’ metaphor, talking about social norms and constructs in dangerous neighbourhoods from which it is difficult to escape. Kendrick’s imagined character is “dazed and confused / talented but still under the neighbourhood ruse”. The following track ‘These Walls’ repeats the theme, but more introspectively. ‘u’, the polar negative of the upbeat recent Grammy-winner ‘i’, sees another character (or possibly Kendrick) berating and guilt-tripping himself, a paranoiac freaking out into a bathroom mirror.

Following the Pharrell-featuring ‘Alright’, a pretty standard piece of ‘10s hip-hop, things begin to perk up and Kendrick begins to look outside of himself, and doubts himself less. The laid-back journey into his psyche that is ‘Momma’ features an entire verse with each line beginning “I know…” (beginning with “I know everything, I know myself / I know morality, spirituality, good and bad health”). The Sufjan Stevens-sampling ‘Hood Politics’ sees corruption everywhere, from Compton to Congress and critics to consumers. The desolate Radiohead-esque ‘How Much A Dollar Cost’ is an imagined tale of Kendrick talking to God via a conversation with a homeless man outside a gas station.

Recent single ‘The Blacker The Berry’ is a furious unleashing of pent-up frustration in the wake Trayvon Martin and recent instances of police brutality (sample: “you hate my people, your plan is to terminate my culture / you’re fuckin’ evil I want you to recognize that I’m a proud monkey” and several galling rhetorical accusations of “you hate me don’t you?”. The dreamy, jazzy closing track ‘Mortal Man’, sprawling over twelve minutes, ends with an imagined conversation with Tupac, discussing his legacy, and then a parable in which the concept behind the title To Pimp A Butterfly emerges.

Musically speaking, To Pimp A Butterfly chooses its inspiration and samples from a much narrower spectrum than good kid…, and that seems to come through in the lyrical themes, as Kendrick becomes more compelling and incisive in his anger as the album goes on. While the album begins with themes more personal to him, such as paranoia, responsibility and dealing with the public gaze that comes with rap superstardom, eventually that frustration bursts outwards and Kendrick dedicates himself to issues like politics, social constructs and black oppression. While good kid… often portrayed Kendrick as an uber-talented jack-of-all-trades, that flair is deployed more strategically on To Pimp A Butterfly. Crucially (and this is what everybody wanted to know) it’s esily as good as the predecessor that made him so popular. (9/10)