REVIEW: The Cribs – ‘For All My Sisters’ (Sony RED / Sonic Blew) 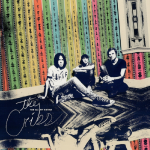 Front cover of ‘For All My Sisters’

What is it about The Cribs that inspires such devotion? Every true-spirited indie fan knows the answer. The Wakefield trio’s wholehearted devotion to the independent music cause has always been genuine and diligent. Their emergence in 2004, alongside a whole host of lesser grotty British “indie” groups now consigned to the landfill of history, has always seen them unfairly labelled as ‘cocky’, ‘swaggering’ or ‘brash’. The truth is, beneath the crowd-friendly singalongs and ‘woah-oh-oh-ohs’ of their early days, their sound was always more indebted to the North-Western American punk scene of the early ‘90s. In 2015, they’re one of the few remaining torch-bearers left in a guitar music scene increasingly dominated by say-nothing careerists.

For All My Sisters, their sixth album, sees the brothers Jarman attempt to secure their relevance more than ten years into their career and keep their place at the top table of British indie groups. They’ve done this by keeping the searing, grimy production from their previous record, 2012’s In The Belly Of The Brazen Bull, but imbuing it with the kind of pop hooks last heard on 2007’s Men’s Needs, Women’s Needs, Whatever, which for my money is still their finest hour. The result is slightly reminiscent of Weezer’s perfect 1995 album Pinkerton, which was the perfect balance of cerebral, funny, catchy and plain rockin’. Just like that album, For All My Sisters reveals its qualities to you over several listens, as you become accustomed to the pummelling delivery of the music to detect the pop characteristics underneath.

What’s immediately noticeable is the extent to which bassist Gary takes up lead vocal duties. Though they both sing, it’s usually guitarist Ryan that’s considered to be the ‘lead singer’. His style is slightly more punk-derived whereas Gary is a touch more melodic, making him better equipped to reach the high notes while keeping the volume in his delivery. We hear this immediately on opener ‘Finally Free’, derived from a ‘50s swing beat but retaining the typical shout-along qualities we all know and love. ‘Mr Wrong’’s distortion and grungey power has more in common with …Brazen Bull, and the old-school Cribs of ‘City Storms’ sees them revisit the kinetic energy of their first three albums, where the chemistry between the Jarman brothers is almost tangible.

But underneath the distortion and punk energy, there’s a distinctly feminine aspect to a lot of the songs, as if they’ve been studying the Sleater-Kinney songbook. You can even tell this through the title, the most explicit indication yet of the subtle effort that The Cribs have put in over the last five years to manoeuvre themselves away from attracting the beer-throwing football fans that marred their 2009 shows. The stunning seven-minute closer ‘Pink Snow’, which sees Ryan increasingly desperately reciting the key line “for all of my sisters / I promise you this that / I’ll try to be brave for you”, would seem to be the epitome of this theme, but it’s repeated in many places. The powerful, brooding anti-anthem ‘An Ivory Hand’ channels the spirit of the aforementioned Sleater-Kinney and other NW-American indie groups, and the glossy nerd-rock of ‘Summer Of Chances’ also concerns gender politics.

The back-to-back duo of ‘Different Angle’ and ‘Burning For No One’ feature the catchiest, most accessible riffs The Cribs have every done, pure pop-punk in their delivery despite the underground sensibilities, and you get the sense that the group are having fun revisiting the influences of their youth. The softer-edged ‘Diamond Girl’ and the Big Star-influenced ‘Spring On Broadway’ have ‘future single’ written all over them if they were on another Cribs album, but in an album pretty much full of accessible moments they’re possibly doomed to be overlooked for stand-alone release. The quiet mid-album breather ‘Simple Story’ features a bare minimum of percussion and a lightly strummed electric guitar, as Ryan wrestles with the rival pressures of being in his thirties and being in a band (“gonna have to be a man someday”).

The selection of Ric Ocasek (ex-The Cars, and ironically the producer of many of Weezer’s finest moments) to produce the new album would appear to be the explanation for this subtle yet unmistakable pop sensibility. Ocasek has often imbued his records with a pleasing glossiness without sacrificing his charges’ other positive qualities, and it’s no different here. On For All My Sisters, The Cribs show that they can be ugly as well as beautiful, and often both at the same time. It’s an album of subversive pop spoken in the language of DIY indie, and as such is the most accessible thing they’ve done since their 2007 career highlight. With another album scheduled for 2015, rumoured to be a distortion-heavy mirror image of this, it’s looking like it’s going to be a very good year for The Cribs. (8/10)