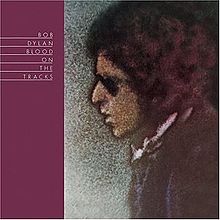 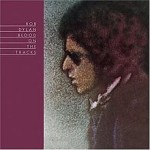 Front cover of ‘Blood On The Tracks’

For anybody looking for an entry point into Bob Dylan’s vast and varied back catalogue, there’s an awful lot to recommend Blood On The Tracks, yet in some ways it’s unsuitable. While it’s arguably his most famous album, and certainly his biggest seller, it’s something of an anomaly in Dylan’s story. While his imperial phase is generally held to be the mid-‘60s, a sequence of six records ending in 1966 that had a tangible influence on all of the forward-thinking artists of the rest of the decade, Blood On The Tracks sits almost a decade away, released at the beginning of 1975. Its timing was unexpected, but its brilliance unsurprising.

After Blonde On Blonde, the last of that series, Dylan suffered a motorcycle accident that prevented him releasing any material for over a year. From the resulting John Wesley Harding onwards, Dylan’s songwriting power seemed to wane, writing self-consciously simple compositions for the next seven years until 1973’s Dylan, an appallingly half-arsed outtakes collection. Having spent most of 1974 exploring raucous rock ‘n’ roll while touring with The Band, Dylan went into A&R Recording studio in New York to record another solo album, deciding upon a return to his acoustic roots. In the post-Christmas lull in December that year, however, he determined to radically overhaul some of the unfinished tracks with an entirely new group of session musicians in Minneapolis. As a consequence, we get a record that seems both musically diverse and emotionally singular at the same time.

The reason for this is Dylan’s indomitable writing style. During the ‘60s, his songwriting was praised for its poetic qualities, with extended uses of metaphor and literary and historical allusions to address grand political, philosophical and existential issues. For Blood On The Tracks, Dylan used much the same means but for different ends. Two things strongly influenced the writing on the new record. Firstly, he had begun studying painting during the spring of ’74 under the tutelage of Norman Raeban, which had led to a different appreciation of the construction of art that bled into his songwriting. Dylan said: “when you look at a painting, you can see any part of it, or see all of it together”. Secondly, he was recently estranged from his first wife Sara, the mother of four of his children, and though Dylan himself has denied it – it was inspired by Chekhov plays, according to him – it’s hard to see the confessional, deeply personal nature of most of the album’s songs outside of this context. His son Jakob has described the songs as “my parents talking”.

Graceful opener ‘Tangled Up In Blue’ immediately opens up a previously unseen side of Dylan, a sombre and reflective one. He had been gentle on 1969’s hurried Nashville Skyline, but nowhere near as poetic or poised. But the serenity of the music belies a maelstrom of emotions. If it sounds familiar, that’s because its rhythm and acoustic guitar style has been imitated so many times subsequently. The lyrics mix up past, present and future, portraying unrelated events in a mythical American landscape, a clear sign of Raeban’s influence, which makes it both abstract and personal simultaneously. It’s also one of Dylan’s most enduring songs, remaining on his live setlists to this day, although Dylan has re-arranged and re-written it many times subsequently. ‘Shelter From The Storm’ takes the same writing approach but the protagonist is saved, rather than tormented, by the memories of his lover.

The clear-eyed and mournful ‘Simple Twist Of Fate’ is similarly abstract, while ‘You’re A Big Girl Now’ is a lot more direct yet sounds equally regretful and introspective as the previous pair. As BOTT progresses, it starts to be more playful with structure and musical setting. The searing ‘Idiot Wind’ bears a structural and vocal similarity to ‘Like A Rolling Stone’, a lengthy indictment on a female character. ‘Meet Me In The Morning’ is countrified and pastoral, showing that he hadn’t entirely ditched his earlier ‘70s style, and ‘You’re Gonna Make Me Lonesome When You Go’ is more recognisably like his ‘60s output than anything else here. Closing track ‘Buckets Of Rain’ offers a light at the end of the tunnel, a sensual and simple ending to a roiling, dark album like the acceptance at the end of the soul-searching.

But the most curious moment, one that sticks out like a sore thumb even amongst Dylan’s various musical guises on display, is the 9-minute ‘Lily, Rosemary & The Jack Of Hearts’. A complex narrative concerning a robbery and a murder masterminded by the titular ‘Jack of Hearts’, it spans fifteen verses and is, to my mind, the most convincing illustration of why Dylan is considered to be such a great writer. Dealing with themes of identity, coincidence and justice, where the three characters adopt romantic facades to disguise criminal motives (or vice versa?), it’s a simply stunning achievement. Though it sounds a touch out of place with its overtly perky country rhythm, in some ways it’s the thematic heart of Blood On The Tracks, the criminal double-dealings of its characters reflecting the emotional accusations and recriminations of a crumbling relationship. How many other songs can you name that have been turned into screenplays?

Six of the ten songs on BOTT are masterpieces, which by themselves could stand as centrepieces on other fine Dylan records, so we’re dealing with an embarrassment of riches. But there’s none more heart stopping than ‘If You See Her, Say Hello’, which takes the same starting point as ‘Tangled Up In Blue’ but strips it of all metaphor and ambiguity, leaving the listener with a raw lament for a former relationship. The events are sung about from an indeterminate point in the future: we’re not sure if it’s a week after Dylan has broken up with, or a decade. It’s precisely the mood captured many years by Justin Vernon (aka. Bon Iver) on 2008’s For Emma, Forever Ago, famously recorded in an isolated cabin during Vernon’s self-imposed post-breakup exile.

When Dylan followed Blood On The Tracks with another excellent record the following year, the politically outspoken Desire, it seemed that the master singer-songwriter had been fully restored to his former glories. It also demonstrated that Dylan’s power was not irrevocably bound up with the ‘60s, the decade he had done so much to influence. But after the so-so Street-Legal later in 1976, Dylan suddenly converted to Christianity and made a trio of proselytising albums that would only appeal to the completist, before churning out an unbroken sequence of records throughout the 1980s and into the mid-‘90s that ranged from unremarkable to plain awful.

Blood On The Tracks is simply one of those utterly singular yet universal records that seems to transcend its authorship, one that is at home in any record collection, like Kind Of Blue or In The Wee Small Hours. Even if a person doesn’t (or thinks they don’t) like Dylan, it’s his most communicable and emotionally available record. Paradoxically, therefore, it’s probably the most un-Dylan album there is, but one that absolutely nobody else could have made. The songs are malleable creatures, open to interpretation, and it’s this aspect that explains the connections that people make to it. ‘Dylanology’ as a college course exists for a reason!

While critics took a little while to warm to it, the public responded well, sending it to Number 1 in the US Billboard 200. Eventually, the critics saw likewise: it currently sits at number 16 in Rolling Stone magazine’s most recent 500 greatest albums list, and the website Pitchfork ranked it the fifth best albums of the 1970s.

Check out the entire album here!