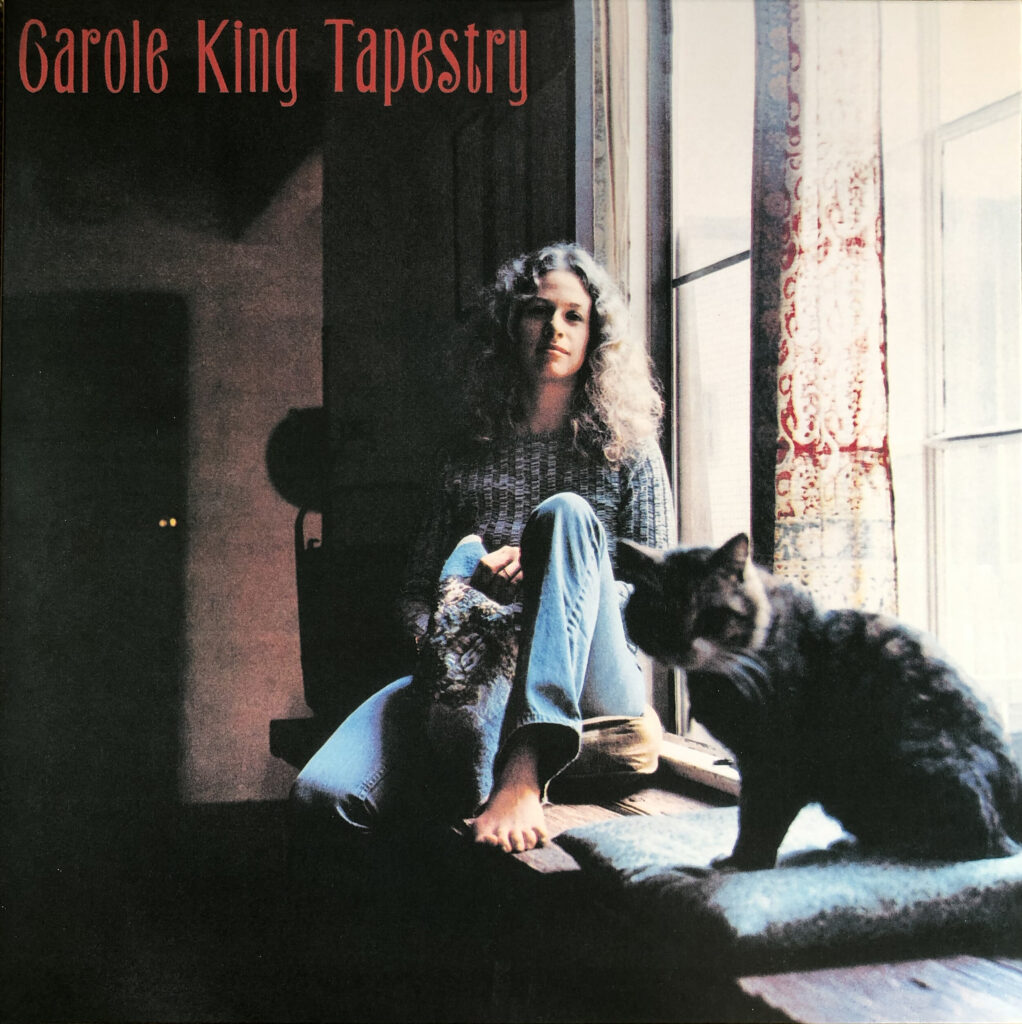 Before they’ve even pressed play or dropped the needle on it, the listener knows everything they need about Carole King’s album Tapestry simply by looking at its front cover. As King sits on a windowsill wearing blue jeans, needlework in one hand and her cat sitting by her side, it’s the very definition of homeliness and domesticity: the aural equivalent of a comfortable old sweatshirt. Now, gatekeeping rock journalists ever since have tended to use these adjectives as terms of abuse, denoting staid or unambitious artistry designed to be consumed by people with surface-level engagements with art – coffee table music for middle-aged people who buy one album a year and treat it as a lifestyle accessory. But in 1971, when Tapestry was released, it’s hard to overstate just how effectively Carole King used these qualities to completely redefine the zeitgeist in American popular music.

Before embarking on a solo career with 1970’s modest Writer, King had been one half of an unbelievably successful songwriting partnership throughout the Sixties with her then husband, Gerry Goffin. Together, they were a significant cog in the legendary Brill Building’s machine of songwriting talent, alongside luminaries like Ellie Greenwich, Jeff Barry, Burt Bacharach, Hal David and scores more, who collectively seemed to corner the market for stylish, urbane songwriting in throughout the Sixties.

Using her own life as a source of perspective – she had been a married mother of two by the age of 20 living in suburban New Jersey, seemingly a parallel life to her career penning glorious pop hits such as ‘The Loco-Motion’ for other singers along with her husband – she wrote the songs that made up her legacy during the Sixties. By 1970, she was not yet thirty but had clocked up more than a decade in the music industry. Having divorced Goffin, she relocated with her two daughters to Hollywood and “discovered herself” in a manner that’s long since become a cliché in the entertainment world. With the encouragement of her publisher Lou Adler, she wrote and arranged a collection of songs with understated intimacy, like the unvarnished demos that she used to deliver while working at the Brill Building.

Tapestry represented a total reinvention for King, a second act in her story that thrust a high-quality songwriter who had hitherto operated in the industry’s shadows out into the spotlight of international stardom. A product of the Fifties rock’n’roll era, she had not only survived but helped to define the Sixties, and now helped to define the early Seventies Laurel Canyon era along with artists like Joni Mitchell – whose equally seminal album Blue was being recorded at the same time as Tapestry in another studio along the corridor from A&M’s Studio B. Somebody who had previously excelled at mass-producing hit singles slotting effortlessly into the different art form of the long-playing album.

What King does so consistently well is to reveal to us the power of simple feelings and truths when delivered in the right way. The unadorned beauty of the arrangement of ‘You’ve Got A Friend’, one of the many incredibly famous songs that Tapestry yielded, acts as a multiplying force for the album’s hymn-like message of universal brotherhood. Although it’s a pretty obvious demonstration of this kind of songwriting power, it’s replicated throughout the album to perfection. The devastating ‘So Far Away’ featuring fellow artistic spirit James Taylor on acoustic guitar (the person who would take the aforementioned ‘You’ve Got A Friend’ to number one on the Billboard charts soon) deals with emotional as well as physical distances between lovers, with lines like “doesn’t anyone stay in one place anymore?” speaking profoundly. The wistful and reflective ‘Home Again’ and ‘Way Over Yonder’ also echo these themes, and the beautiful imagery of “soft silver sadness in the sky” in the title track places the record as a product of the early Seventies Los Angeles scene.

But it’s not all pianos, acoustic guitars and mellow introspection. The album’s huge hit single ‘It’s Too Late’, co-written with then-unknown songwriter Toni Stern, is a wonderful compound of radio-friendly soft-rock and doo wop. It was also a highly contemporary and feminist take on an irreconcilable relationship breakdown, about moving on and not looking back (“I’m glad for what we had”). The raunchy blue-eyed soul delivery of album opener ‘I Feel The Earth Move’ (the double A-side accompanying ‘It’s Too Late’s release as a single) also represented a clean contrast from the fluttery, floaty Laurel Canyon scene – grittier, dealing with the everyday and the real as opposed to the post-hippy wanderings of some of King’s contemporaries. The Gershwin-esque ode to positivity and self-respect of ‘Beautiful’ remains radiant to this day.

In two places on Tapestry, King reclaims two of the songs she wrote during the Sixties for other artists. A slower take on ‘Will You Love Me Tomorrow?’ that she had written for girl group The Shirelles a decade previously, became a radio hit once again in this incarnation, while the immortal expression of femininity of ‘(You Make Me Feel Like) A Natural Woman’, made famous by Aretha Franklin, is stated by King with quiet, magisterial confidence to close the album.

Together, Tapestry makes up a guide to modern life that rings as true today as it did fifty years ago – telling of its trials and tribulations, its disappointments and triumphs, and the people you can depend upon on that journey. The numbers of singers who have subsequently tried to turn the same trick as Carole King are legion, but very few have ever emulated the incense-and-candles brilliance of Tapestry. When you get this kind of thing wrong, it comes off like an inspirational Instagram quote, a puff of sentiment devoid of substance. King turns the everyday into the essential.

The astonishing success that greeted Tapestry is difficult to overstate. It was one of those very rare records that becomes transformed into a completely unavoidable social phenomenon, becoming certified diamond in America for sales of over ten million copies, with an estimated 22 million sold around the world to date. It stayed in the Billboard charts for more than 300 weeks, and scooped the Grammys for Album of the Year, Record of the Year (for ‘It’s Too Late’) and Song of the Year (for ‘You’ve Got A Friend’), representing the first time that a woman had won either of the latter two awards. Truly, Tapestry’s success was a trailblazer for female artists.

Listen to Tapestry by Carole King here via Spotify, and tell us what you think below!