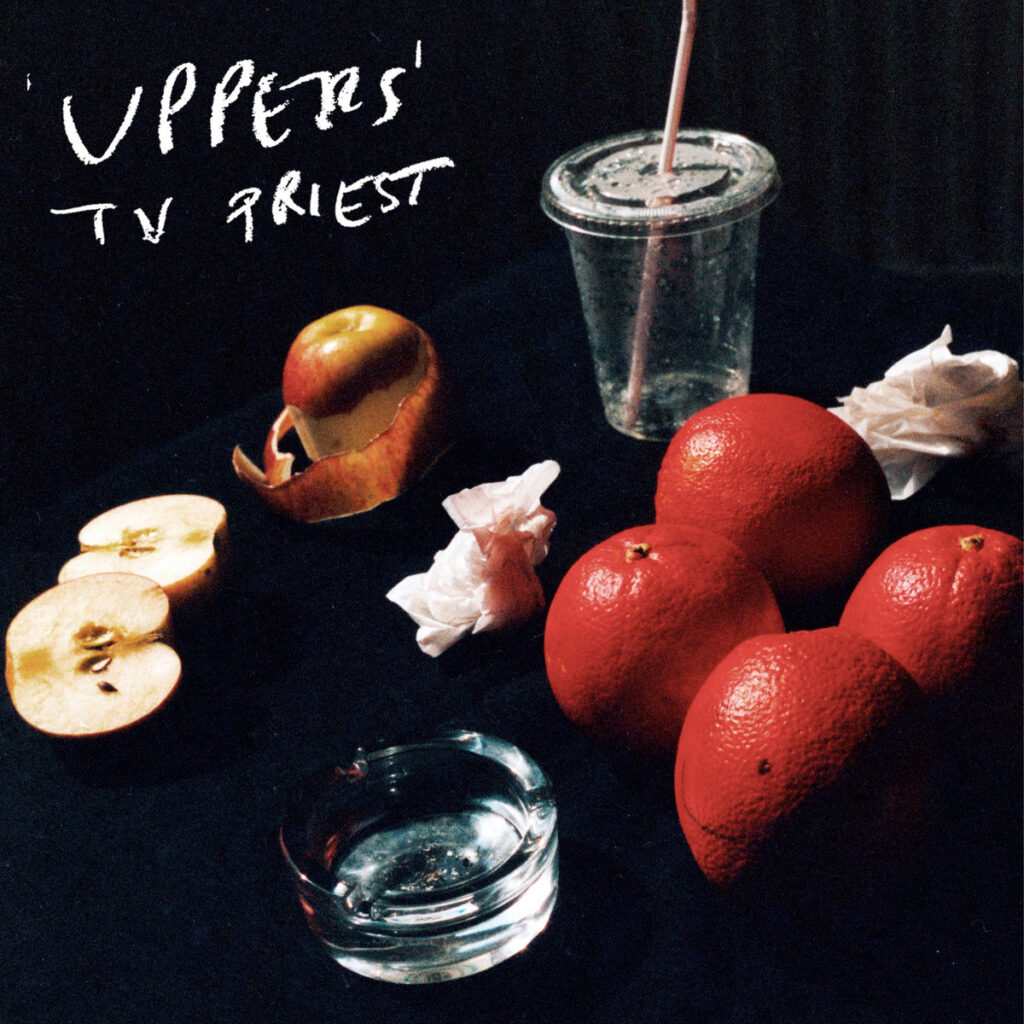 On the surface of things, TV Priest are just like any number of British post-punk revivalists that have followed in the slipstream of IDLES’ significant commercial success over the last few years. But unlike the young pups of Shame, there’s considerably more life experience in the story of this London-based quartet. Previously playing in a band together as teenagers around the turn of the millennium, the group reunited in their mid-thirties in 2019, having all led “real lives”, with families, jobs and mortgages. Judging by the evidence of their debut album Uppers, there’s certainly something to be said about life experience bestowing greater wisdom and creativity as far as it concerns post-punk.

Armed with those experiences, TV Priest detail the trials of adulthood with a youthful energy belying their comparatively advanced years. Angular, distorted post-punk guitars chug and explode over barrelling rhythms, displaying a studied sense of economy and never outstaying their welcome. Charlie Drinkwater’s vocal delivery is reminiscent of that of Protomartyr’s acerbic singer Joe Casey, a sturdier take Mark E. Smith’s hectoring sing-speak style, reeling off a word-cloud of themes describing the modern condition in abstract terms and twisting anodyne Instagram-friendly homilies to make them pithy and sardonic. Indeed, there’s something of The Fall man’s alleged lyrical predictive power in tracks like ‘Journal Of A Plague Year’, although it was written before the pandemic and inspired by Daniel Defoe’s 1772 account of the bubonic plague’s ravaging of London. When he mutters “Hey buddy, normalise this”, it does feel right on the money in terms of essaying our collective internalisation of all the chaos of the last year.

Opening with the screed on false consciousness of ‘The Big Curve’, which grows from wiry intensity to a muscular climax, TV Priest deliver a dozen tracks that consistently captivate the listener’s interest more than the unremarkable competency of so many post-punk revivalists of recent years. ‘Decoration’ is a piledriver of a track, taking aim at the bread-and-circuses aspects of modern culture (“I’ve never seen a dog do what that dog does / and I’m through to the next round”). The spin-doctoring of the media comes under the microscope on the sinister, moody ‘Press Gang’. More personal and vulnerable themes of responsibility and adulthood come into play on the raging sturm-und-drang of closer ‘Saintless’.

Yet there’s plenty of sonic diversity on display, meaning Uppers isn’t some relentless, slate-grey slog by its final third. ‘Leg Room’ is set to a Suicide-esque ticking of a drum machine, while the slower build-up of ‘Powers Of Ten’ shows an inherent grasp of post-punk dynamics that’s a surprisingly rare commodity. Uppers may not be terribly original, either in medium or message, but for a debut effort it’s incredibly encouraging, suggesting that TV Priest have a true post-punk masterpiece in them further down the line. (7/10) (Ed Biggs)

Listen to Uppers by TV Priest here via Spotify, and tell us what you think below!