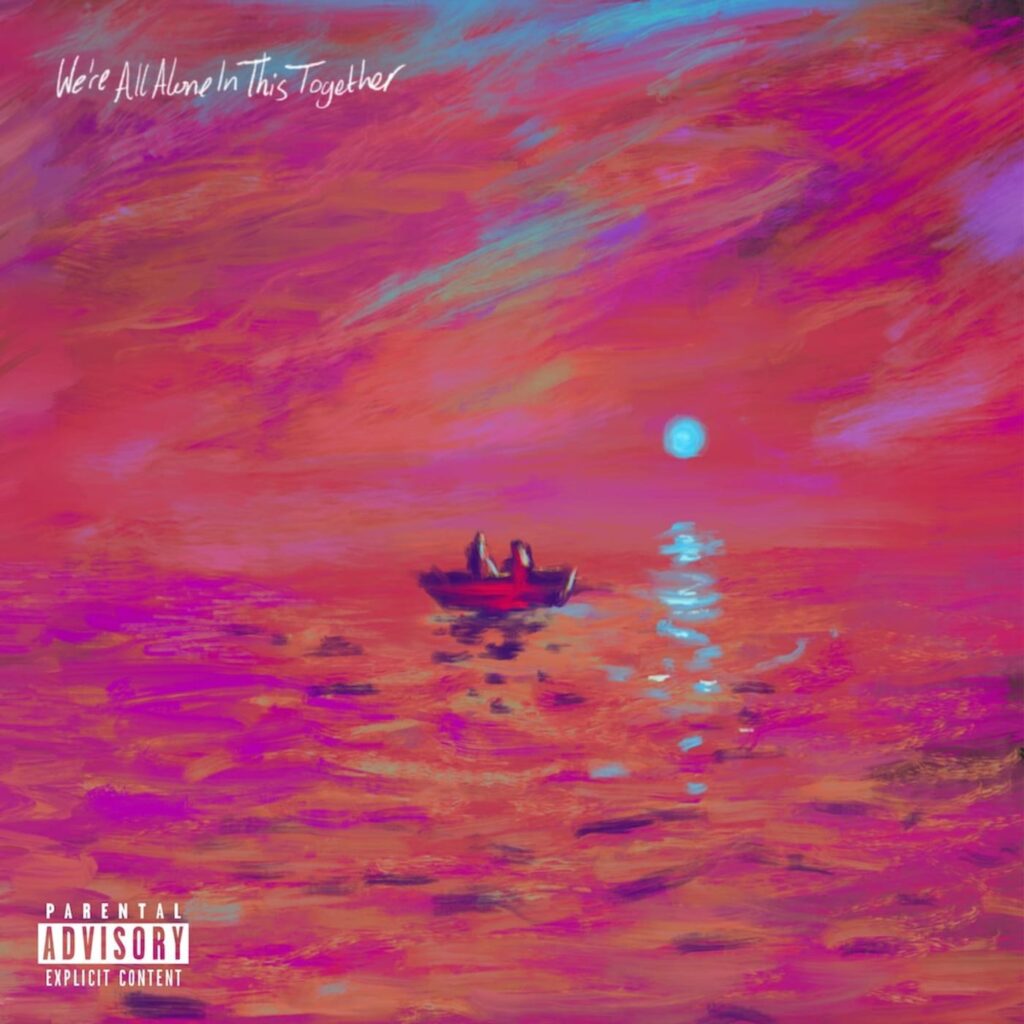 Compelling and empathetic storytelling is key to ‘We’re All Alone In This Together’, which sees Dave exploring identity and belonging more closely.

London, 2020. A city that should have been thriving and loud is quiet, contained. There’s a lot of uncertainty everywhere, but more so than ever before, and London doesn’t feel like London. It was as if a fire had swept through it. It was bereft of life.

London has always been a kind of co-writer of Dave’s songs, an enduring muse. On his 2019 debut Psychodrama, it opened with a simple question: “where were you from?” which Dave explored over the course of 11 tracks, which sees him take apart his relationships, his own mental state and his trauma and how that shaped his identity. Dave, seemingly already the voice of a generation on his second album, talked through issues with eloquence, power and a sense of confidence that was extraordinary. Dave wasn’t just a great rapper. He was the voice of social change, akin to George The Poet, or for a more classic reference, John Cooper Clarke.

On his second album, titled We’re All In This Together, the key themes are a deeper exploration of identity, along with a sense of moving forwards. Track ‘Three Rivers’ ends with a perfect representation of this, a voice note from actor Nathan Tettey which talks about finding black pride, whilst moving hypothetical rivers, which for me represented a constant evolution and change.

Dave is on a constant state of flux on this second album. Whilst tracks like ‘System’ are made for summer parties, opener ‘We’re All Alone’ sees him reveal to a fan that he, too, has suffered with suicidal thoughts and feelings, and he finds himself overwhelmed with happiness that he was the person that saved this fan, and despite all the bad in his past, he feels that he’s moved forwards.

Similarly to Headie One’s brilliant ‘GANG’ from 2020, Dave also speaks about personal redemption. ‘Lazarus’ finds Dave rapping about the time he was almost sent to boarding school after his mum found a knife in his possession. The middle of the album, despite dark lyrics, makes up for a number of extremely well-produced pop hits. ‘Law Of Attraction’, despite featuring one of Dave’s weakest flows, features the album’s best beat and chorus, delivered by Snoh Aalegra, who’s voice is smooth as butter on the hook. This is then followed by the much sadder ‘Both Sides Of A Smile’, which feels like a much more honest display of personal hurt and tragedy, especially related to relationships. James Blake, who features on this track, helps with an uplifting bridge, and then this eventually turns into one of the best musical moments of 2021, as a female vocal eventually fades in under Dave’s until it is over-powering and the only voice remaining. A powerful, feminist monologue, it’s a piece of poetry that steals the entire show.

We’re All Alone In This Together’s centrepiece ‘Heart Attack’ is almost ten minutes long. Starting with police reports about knife crime in London, and the links between poverty, social isolation, and knife crimes. Dave’s lyrics talk about how his upbringing could have led him to violence, and how at 12 he wished he was a white man. The lyrics eventually become a story about how important it was for Dave to become a provider, especially to those that he loves. For the entire length of the song, Dave talks about his history with knives, sprinkling it with Shakespeare references, the way the media glorifies or romanticises white criminals whilst demonising black criminals, and references to gameshows until the beat cuts out, and lyrics about how his mother “fell” down the stairs while pregnant cut deep. This track is a hard listen, but essential for showing an often-hidden black experience.

Dave finishes We’re All Alone In This Together like he’s closing a performance. A bow, before the curtains close. ‘Survivor’s Guilt’ is one of the most powerful tracks on the album, and a beautiful closer, in which Dave talks about his anxieties and how it’s important to continuously move forward, as well as a Romeo & Juliet story of love (that play being one of the recurring motifs of the album) with his current girlfriend. The song eventually turns to Dave’s own personal struggles with guilt, money and how he has no trust for the government. By the time the track is over, and the album, it feels appropriate to breathe out. For the entire hour, I realised that Dave had me captivated, and his voice shone through more than most modern grime albums.

We’re All Alone In This Together starts with three beeps and a film roll running. By the end, Dave wishes to shoot a movie that he could dedicate to his mum. This, more than any movie, is a beautiful dedication to a clearly extraordinary woman. (9/10) (Harrison Kirby)

Listen to We’re All Alone In This Together by Dave here via Spotify, and tell us what you think below!