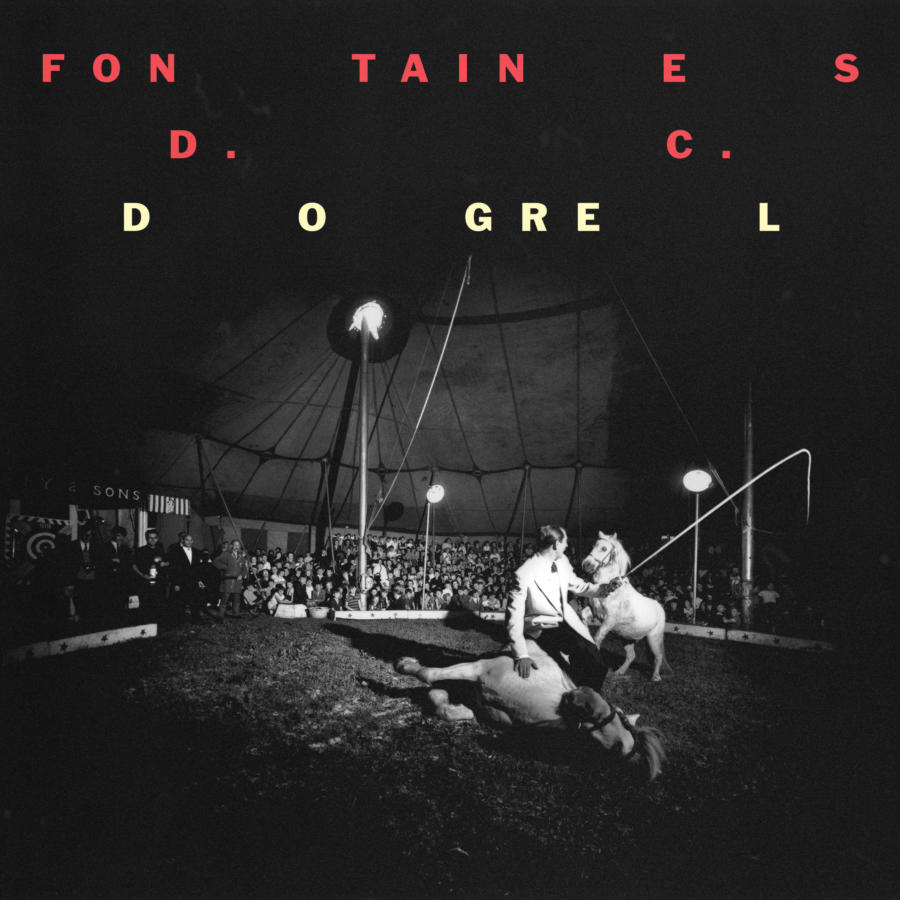 Grasping a much-ignored truth that poetry and romance have a place in punk rock, Fontaines D.C.’s debut album ‘Dogrel’ is a modern classic.

“Doggerel” is a term used to describe a certain strain of simplistic, unrefined, technically inept working-class pub poetry, once common across Ireland. Today, it is more often used as a derogatory term for poor poetry. Dublin post-punks Fontaines D.C.’s debut album of almost-the-same-name, DogreI, harnesses this sense of an old Ireland lost to the modern world. The band’s reputation has outgrown their native land, with UK and US tour dates selling out left, right and centre, and their first full-length is one of the most anticipated punk albums of the decade. The band, led by frontman Grian Connell, bonded over a love of poetry at music college, and their early singles were early indications of their incendiary intelligence and maturity as a band.

‘Hurricane Laughter’ is a rock’n’roll stomper full of the anxiety of the turned-on but switched-off generation, in the repeated mantra of “there is no connection available”. ‘Chequeless Reckless’ takes pot shots at “phonies”, “sell-outs”, “idiots”, and “dilettantes” over a fuzzed-out, Duane Eddy-style guitar riff, and ‘Boys In The Better Land’ captures the Fontaines’ brazen ambition – “get yourself a good car, get outta here”. Even more impressive is ‘Too Real’. Amongst the standout tracks on the album, the cold instrumental’s stop-start drums and needling bass gives way to raging guitar work and Connell’s deadpan, speak-sung, poetic lyricisms and the snarling refrain of “is it too real for ya?” The slurred vocals and the nagging, bass-driven groove throughout Dogrel reveal more than a hint of The Fall’s influence, which is most evident on this track.

The romance, tragedy, and poetry that is ingrained in the bricks and mortar of Dublin serves as Fontaines D.C.’s main source of inspiration. From the initials D.C. of the band’s name (Dublin City, added after a legal dispute with a different Fontaines), to namechecking James Joyce in ‘Boys In The Better Land’, the lifeblood of Dublin runs through the Fontaines’ veins. The stream-of-consciousness ramblings of songs like ‘Too Real’, ‘Hurricane Laughter’ and ‘Television Screens’ is pure James Joyce, and Connell’s imagery has the vivid, dreamlike quality of W.B. Yeats. ‘Big’ describes Dublin as “a pregnant city with a Catholic mind”, capable of birthing such a vibrant, vital music scene, yet simultaneously too conservative to nurture it, whilst album closer ‘Dublin City Sky’ evokes the best of melancholic Irish ballads. A traditional, waltzing melody tells of a lilting gutter romance, forged in Chinatown bars and rain-soaked markets. Whilst it could be interpreted as a self-conscious prod at Irish stereotypes, there is clearly a genuine love for their hometown and the rich musical culture that comes from it. All five members of the group still live in Dublin, despite playing regular gigs and enjoying a great deal of popularity in the UK.

In the context of the UK music scene, Fontaines D.C. are completely refreshing. Whilst Idles and Shame could be considered Fontaines’ contemporaries, they take themselves so seriously – and too much for some. Shame’s Charlie Steen infamously declared the idea of a rock star “offensive”, whereas ‘Big’ is a tribute to the Fontaines’ wide-reaching aspiration. Also, Fontaines’ difficulty to pin down politically is a more than welcome change from Idles’ often-humourless social justice campaign. With Dogrel, Fontaines D.C. understand that music can’t change the world – but they do understand that poetry and romance have a place in punk rock. (8/10) (Louis Marlow)

Listen to Dogrel by Fontaines D.C. here via Spotify, and tell us what you think below!