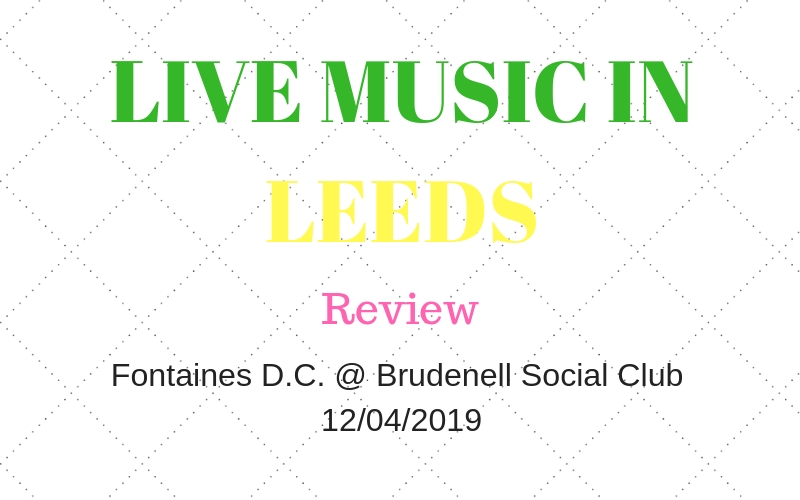 Nobody who knows the smallest thing about Fontaines D.C. could be in any doubt that they are an Irish band. Every interview, review, and feature about the group in the British media frames the Fontaines through this lens, and the undisguised sound of frontman Grian Chatten’s deep brogue can’t leave anybody in any doubts as to their background. So to walk on stage to the Pogues’ ‘Boys From The County Hell’ in Leeds last Friday night – the day of the release of their feverishly anticipated debut LP Dogrel – could be seen either as a patriotic homage to their homeland, or an ironic two-finger-salute to anyone who might treat their identity as a novelty, as an excuse to reach for the Guinness.

The band launches into ‘Hurricane Laughter’ at breakneck speed, whilst Grian frantically paces the stage, hands firmly in his pockets, as though he’s lost something. When he eventually finds whatever he’s looking for, he attaches himself to the microphone like a magnet, barely moving from the spot for the rest of the evening, adopting a stage presence reminiscent of the late great Mark E Smith. He even appears to stifle a yawn at one point.

Although somewhat motionless, Fontaines D.C.’s live performance has a rabid intensity. The whole band has a wild glare, and they whip up a raucous reaction. On tracks like ‘Too Real’, they build up an unbearable amount of energy, before releasing it by barely changing a thing. The sound is both expansive yet urgent, wide-open guitar chords propelled forward by a throbbing rhythm section. Other early singles like ‘Roy’s Tune’ and ‘Boys In The Better Land’ inspire belting sing-alongs, and one eager stage invader launches himself into the crowd on at least two separate occasions.

The group’s reputation has been spreading like wildfire, and it is no surprise that their live dates are being sold out at the drop of hat, even in November and December. In the tradition of The Clash and The Fall, Fontaines D.C. are both fearsome and erudite, and their inevitable upward rise will be as fascinating as it will be revolutionary. (Louis Marlow)