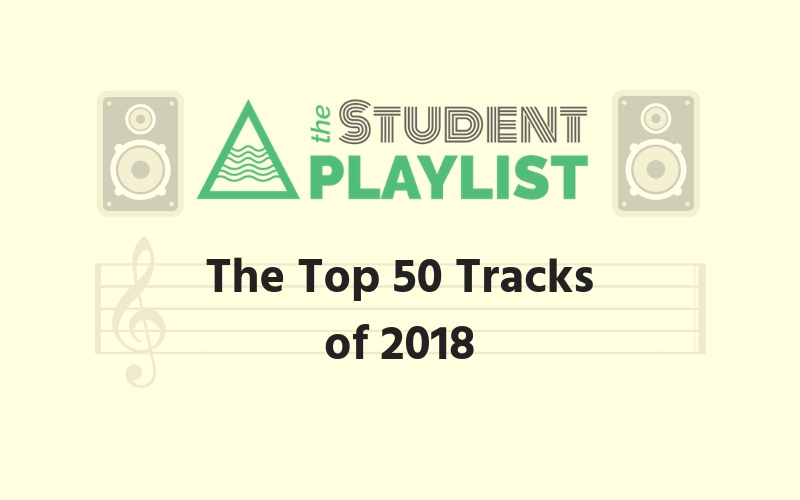 As a companion piece to our annual end-of-year albums list published earlier this month, The Student Playlist presents The Top 50 Tracks of 2018.

You can listen to the full list, song-by-song, over at Spotify on our playlist, or scroll below to check out what we came up with. Trust us, it involved a lot of VERY hard choices to whittle so much wonderful new music down to just fifty songs!

Never one to dumb down his street lingo for a more mainstream appeal, Pusha T directly references his particular usage of language while achieving new levels of craftsmanship on this fire, Kanye-produced comeback. (Ellie Wolf)

The world would be a better place if proto-goth aesthetics made a comeback and MGMT showed everyone the way to do it. (EW)

Despite the presence of an actual hook on ‘In My View’, Young Fathers embraced pure chaotic energy on, arguably, their catchiest song to date. (EW)

With its haunting video shot in the abandoned city of Pripyat, ‘Life Is Golden’ was the humanist centrepiece of Brett Anderson and co.’s latest album The Blue Hour and fell easily into the category of Instant Suede Classic. (Ed Biggs)

Alex Turner takes widespread dismal disenfranchisement with technology and puts it through the interesting narrative spin of advertising a hotel resort on the moon for some insightful, yet not humourless, entertainment. (EW)

An FM-rock exocet missile that led off their 13th album Resistance Is Futile, the Manics showed they could still do stoicism and ennui better than anyone else with the soaring ‘International Blue’. (EB)

Exceptional standards in electronica are something that Jon Hopkins can always be relied upon to produce, but on ‘Emerald Rush’ he possibly out-did himself, incorporating glitched-out synths weaving in and out of each other that make you feel nothing less than high. (EW)

‘I’m Not Scared’ is one of the most delicate songs on our list, but also one with immense emotional depth, intense lyrics and transcendent warmth of the vulnerable Sara Beth Tomberlin. (AR)

New York quintet Bodega crashed onto the scene at the start of the year with this heckling, sardonic protest song at the shit state of modern politics set to bristling, Strokes-influenced new-wave. (EB)

A sultry hook-up between the current queen of the indie nation and one of its elder stateswomen for Chan Marshall’s first Cat Power album in six years. (EB)

Danish punks Iceage delivered an imposing collaboration, with Elias Bender Ronnenfelt and Sky Ferreira’s vocals battling for parity with a wall of raging but soulful brass and a hurricane of guitars. (EB)

‘Mr. Tillman’ tells a story of a character behind the veil of Father John Misty – a troublesome man who drinks too much and causes chaos in hotels, but which ultimately serves as a semi-ironic depiction of the Misty character itself. (AR)

Heavily inspired by Bruce Springsteen, ‘Loading Zones’ is a laid-back tune that might seem more metaphysical than it actually is, but Kurt Vile’s sheer optimism, even on the streets of his “dirty little town” of Philadelphia, is simply uplifting. (AR)

The cathartic sign-off of “community, so fuck you” at the end of ‘Danny Nedelko’, which raged ferociously at ignorance and prejudice, signalled to the public that IDLES’ second album would be something truly special. (EB)

With its clattering, cascading drum pattern, gonzo guitar shredding and its piercing flute figure, the enigmatic Swedish collective Goat released arguably their finest single yet in ‘Let It Burn’. (EB)

Becoming an unofficial World Cup soundtrack over the summer, ‘Total Football’ is a message of solidarity – “Workers, authors, poets, stoppers, power resembled, if we are assembled”. Fuelled with London punk, the song finishes with a football-chant outro that sticks with the British theme. (AR)

As they did many times over on their subtly brilliant new album 7, Beach House recorded a song which can easily make you forget about anything else than its stunning, almost picturesque landscape, filled with lustrous synths and soothing vocals. (AR)

Rolling Blackouts C.F. gave us one of the finest alt-rock singles of the year which discusses the everlasting quandary of time passing and the consequences of its inevitable rush. (AR)

‘Blowing Up The Congo’ is a standout track from Petite Noir and guest Saul Williams – political and outward-looking, but also intimate and personal. (AR)

The five year wait for a new Anna Calvi album was all worth it once we heard the Spectorian beauty and feminist urgency of Hunter’s lead-off single. (EB)

Greta Kline is one of the sharpest and most poetic indie-pop lyricist of her generation, something that Frankie Cosmos’s ‘Apathy’ illustrates perfectly through its vivid storytelling, inspired by the small yet meaningful moments in life. (AR)

With its intricate but hypnotic riff and reverb-drenched sonics, Brighton trio Our Girl delivered one of the most hopelessly catchy indie tracks of the year, one which translated even better live… (EB)

A confident, Certified Banger, celebrating success and accrued material wealth after years of laborious and not necessarily dignified work. (EW)

On a song that defies even the highest expectations that one may have had of this triumphant storyteller, Neko Case examines the unpredictable nature of the world and “an unspecified tide” which is God. (AR)

A modern indie-rock masterpiece, ‘Pristine’ is a sarcastic and melodramatic song that added a lot of life and spark to Lindsey Jordan’s Lush, showing a confident artist who can express her emotions without hesitation. (AR)

An energised recap of every disturbing or in-other-ways surrealist news headline that has been popping up our news feeds for the last two years (or, a Synth Pop Inquiry Into Burroughs-ian Writing Methods). (EW)

Inspired by the political turmoil of the current day, ‘Rank & File’ is a protest song which vocalizes Sumney’s social message along with his fears and sense of unease, which dominates far too much of daily life in America. (AR)

For his fourth Blood Orange album, neo-R&B ingénue Dev Hynes went even darker than ever before, reflecting the creeping horrors of 2018 back on itself. ‘Charcoal Baby’ was just the best of many highlights. (EB)

A sharp critique of male violence and poignant description of female fear, ‘Nameless, Faceless’ contains some of Courtney Barnett’s angriest and most honest lyrics to date, such as “I hold my keys, between my fingers,” which sadly are extremely relatable for young girls and women. (AR)

Jason Pierce’s eighth Spiritualized album took a painstaking six years to make all by himself with ProTools, but the labour of love was worth it with reliable sparklers like ‘I’m Your Man’. (EB)

The ribcage-shaking boom of the funereal percussion of Low’s ‘Always Trying To Work It Out’, the highlight of career masterpiece Double Negative, is so forceful that it seems to stop all the song’s other elements in their tracks for a micro-second. (EB)

Nineties Brit house veterans and American punk icons might make for unlikely musical bedfellows, but this collaboration between Underworld and Iggy Pop worked spectacularly. In his inimitable, friendly fashion, Iggy reminisced about the “golden age of travel” and being able to smoke on aeroplanes while Rick Smith and Karl Hyde’s galloping, surging soundscape elevated the song above the clouds and towards the heavens. Can we have a full album next time please? (EB)

The official winner of this year’s “Women Being Mad” song contest, by virtue of distorted guitar breaks that reverberate in your brain with the strength of every single time you’ve been upset with a man. (EW)

Written by Karen O for a promotional video of French fashion company Kenzo, ‘Yo! My Saint’ is a smouldering rock-soul-ballad concoction that captures the essence of romance in its yearning lyrics and melodramatic atmosphere. (AR)