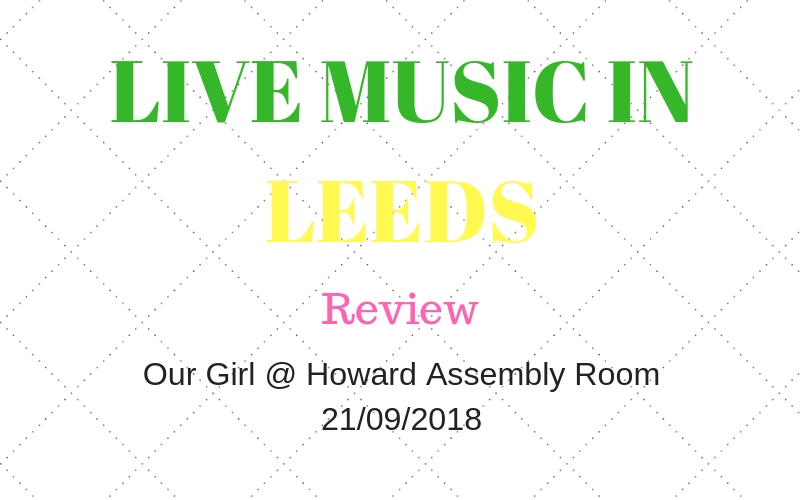 It’s strange to see a conventional indie-rock outfit of guitar, bass and drums in a performance space one imagines was built with classical music and theatre in mind, but that’s what we were treated to this week when Our Girl played at the Howard Assembly Room in Leeds. The Brighton-based trio are currently on a short British tour in support of Bill Ryder-Jones, former member of The Coral and who produced their recently released debut album Stranger Today. While their sound is perhaps more reminiscent of dingy, sticky-floored clubs than the pleasantly clean, light oak-panelled walls and acoustically balanced environs we find ourselves in, Our Girl demonstrate exactly why they’ve found themselves in the music press and on BBC 6Music’s playlists recently.

The live context seems to bring out an extra dimension that got slightly lost on the album itself. Mixing the low-end thump and grit of early Pixies with the ethereal shimmer of shoegaze, prime Cocteau Twins influences and the expansiveness of post-rock, Our Girl give a compelling demonstration in modern indie dynamics. ‘Our Girl’, the band’s live set opener and kinda-theme song, lays down that template almost immediately. Recent single ‘In My Head’, with its mid-song acceleration, turns into a runaway freight-train live, while ‘I Really Like It’ is another stand-out. The tight, upward-spiralling riffage of closer ‘Boring’, with its tribal pound of a coda, brings a taut but varied half-hour set to an end.

Bill Ryder-Jones, the evening’s main draw, has long eschewed any connections to The Coral, and his set, punctuated by his enjoyably droll Scouse banter with the audience, focusses entirely on his solo work and on material from his upcoming fourth LP Yawn. While he sounds a bit bunged up with flu on during the first four unaccompanied tracks, the material he breaks out with his backing band is predictably lovely.