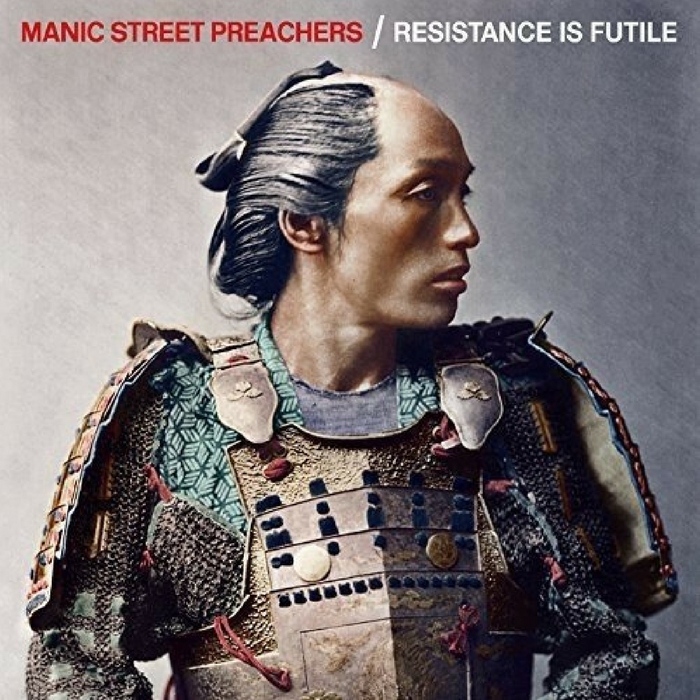 Toiling to resolve their populist tendencies with artiness, ‘Resistance Is Futile’ might be the most emotionally honest Manic Street Preachers album yet.

It’s perhaps fitting for a band as multi-faceted in their identity and approach as the Manic Street Preachers that the title of their 13th album, Resistance Is Futile, should have such an ambiguous meaning. In the context of the political upheaval of the last few years, is it a call to arms to confront changing times, or is it an acceptance of defeat in the face of it? There hasn’t even been any hard clues as to the band’s intentions going forwards, with songwriter and chief spokesperson / propagandist Nicky Wire describing Resistance Is Futile as “either a new era or the end”.

Of course, the Manics have been in this kind of sentimental territory before with 2010’s Postcards From A Young Man, which was billed by Wire as “one last shot at mass communication”, but this is a band that’s always reserved the right to contradict itself. The It’s possible to see Resistance Is Futile as the third creative re-grouping of the Manics’ career, after the disappearance of their talismanic songwriter Richey Edwards forged the defiant Everything Must Go and the prospect of irrelevance sparked the glorious re-birth of 2007’s Send Away The Tigers.

But where those two triumphs were born out of tragedy and necessity, Resistance Is Futile comes off the back of a very successful and creatively fertile period for the Manics. After the consecutive glories of 2013’s pastoral, folk-influenced Rewind The Film and the fearless, European artiness of 2014’s Futurology, two very different records, there doesn’t seem to be any external compulsion for Wire’s existential attitude this time around, other than the long-term future the Manics see for themselves. Perhaps it’s the 20th anniversary The Holy Bible and Everything Must Go tours (not to mention the pretty hilarious Wales Euro 2016 anthem…) that’s brought this on, but it now seems to be a question of what the Manics want from themselves, all now a year away from their fifties, as opposed to what others might expect of them.

Both musically and thematically, Resistance Is Futile seems to be attempting to reconcile two contradictory versions of the Manics that they’ve flitted between in various stages of their long career: the one looking optimistically towards the future, of rousing anthems and fearless rhetoric, which brought us Everything Must Go and Send Away The Tigers, and the pensive and melancholic Manics, the regret-filled and self-doubting Manics that recorded This Is My Truth Tell Me Yours and Rewind The Film. It wrestles to resolve their populist tendencies with their artful ones, to address the turmoil of the outside world and their place within it, and does so pretty successfully, barring a handful of ideas that don’t really work.

As such, Resistance Is Futile is arguably the most honest Manics album, though far from being their best. The album’s mood is set immediately with the lush, string-swept ‘People Give In’. Beset with worry, insecurity and a sense of all things being transitory, James Dean Bradfield exuding empathy with simple truths like “people get tired / people get old”, it’s the Manics at their most humanistic – downcast, yet defiant and stoic.

Exceptional lead single ‘International Blue’, dedicated to post-war French artist Yves Klein, is a precision-targeted exocet missile of FM rock, anthemic in the same way as ‘Motorcycle Emptiness’ and peacocking with autumnal joy. It’s a bit of an outlier for the record in general, as it’s by far the most radio-friendly moment, but there’s other moments of panorama too. The reflective ‘Distant Colours’ is a sullen beauty, bemoaning the loss of ideology and certainties in the modern world and blown up to the “widescreen melancholia” that Wire feels encapsulates the album as a whole. The Manics, who’ve always been switched-on, have seen an awful lot of social, political and pop music change in their time, find themselves in a great position to critique the state of the world in 2018, even though we’re dimensions away from the punk and nihilist attitude of Generation Terrorists.

The same sentiment is echoed later in the glorious ‘Hold Me Like A Heaven’, with Bradfield sounding bewildered and pained when he looks at atomised, alienated Britain in 2018 beset with cultural nostalgia (“all the ties that bind have come undone… what is the future of the future?”). Nicky Wire delivers a very personal moment on ‘Liverpool Revisited’, echoing the sentiments of 1998 song ‘S.Y.M.M.’ regarding the Hillsborough disaster, only this time applauding the courage and stamina of the victims’ families. Wire takes the microphone himself on muted album closer ‘The Left Behind’, taking a phrase popularised during the Brexit referendum and turning it into a rumination on the Manics’ current state.

The musical polarisation between classicism and futurism is perhaps illustrated best by comparing two of Resistance Is Futile’s best tracks. The machine throb underpinning ‘Sequels Of Forgotten Wars’ is a continuation of Futurology’s pan-European outlook, while the orchestrated, detailed pop of ‘Dylan & Caitlin’, a duet sung with Welsh chanteuse The Anchoress, tells the story of the Thomases’ alcohol-fuelled romance. It fits into a great lineage of Manics duets (‘Little Baby Nothing’ and ‘Your Love Alone Is Not Enough’ being the very best, obvs) and is the kind of thing that only they can do and make it work.

However, there are a small handful of moments on Resistance Is Futile that aren’t as resonant as the majority of the tracks. The low-key ‘Vivian’, concerning photographer Vivian Maier, is intelligent but lacks the musical heft to register proper impact with the listener. The back-to-back ‘In Eternity’, which turns potentially interesting European art-rock influences into a bit of a slog, and the clumsy rocker ‘Broken Algorithms’ threaten to derail the album entirely near the end, before the expansive ‘A Song For The Sadness’ picks things up just as they’re petering out. But they’re minor complaints in the context of an album that stands up wonderfully to repeated listens, just like its immediate predecessor Futurology.

A sense of history, pride, even hope for the future, course through the album’s veins and blaze behind its eyes, but the most single most important thing that Resistance Is Futile represents is that, even as they prepare to enter their fourth decade, the Manic Street Preachers are still committed to progress and self-discovery. Many bands less than a third of their age have long since surrendered this impulse, the element that separates the enduring greats from the fleetingly fashionable. As for the album’s place in in the Manics’ wider discography, that will become clearer over time – despite its inconsistency, every individual Manics fan will see something different they love in Resistance Is Futile. (7/10) (Ed Biggs)

Listen to Resistance Is Futile by Manic Street Preachers here via Spotify, and tell us what you think below!