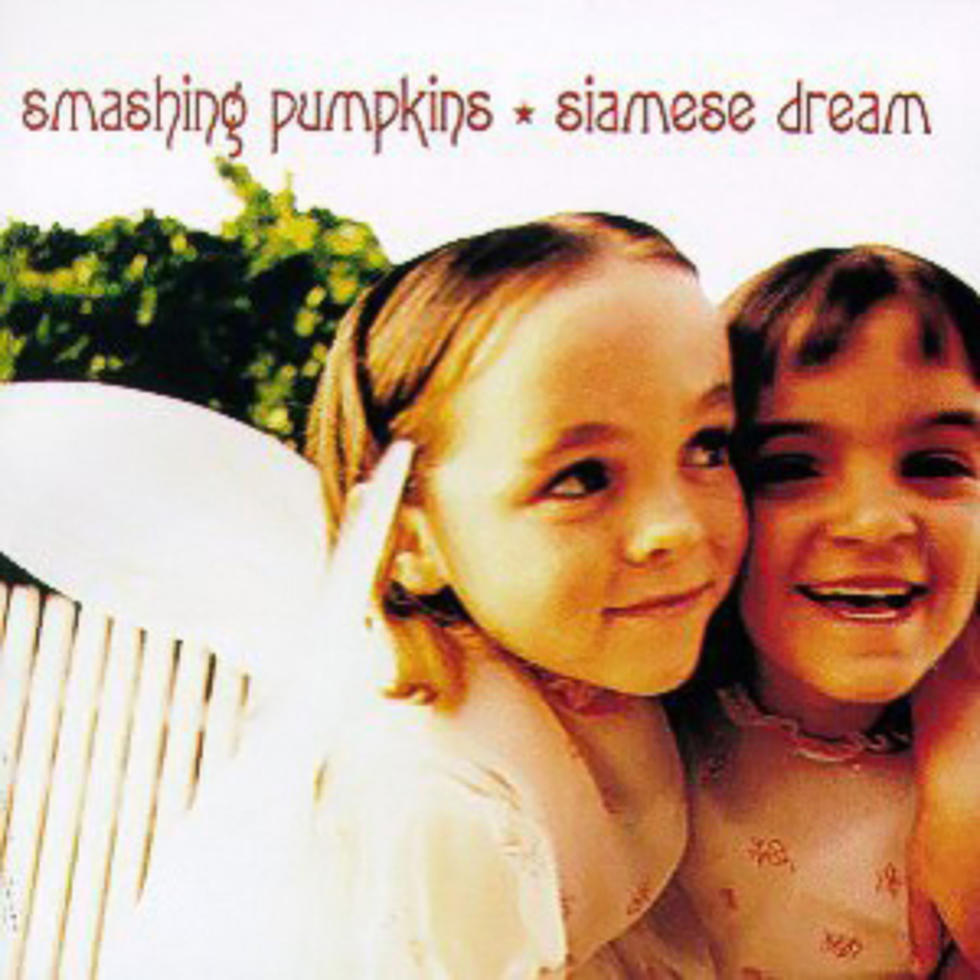 For some bands, it takes several albums to find their identity, gradually evolving and adding elements record by record until they discover their trademark sound and image. Billy Corgan, on the other hand, seemed to have a fixed vision of who and what Smashing Pumpkins were, even when their aesthetic and musical style clashed with the early ‘90s alternative rock zeitgeist. They cohesively fused dream-pop, shoegaze, psychedelic rock and even elements of prog-rock and heavy metal as they burst onto the scene with their full-length debut Gish in 1991.

Although the album was disconnected from indie trends and norms, the production, spiritual themes, heavy guitars and Corgan’s distinctive vocals made Gish a triumphant first outing for the Pumpkins. In addition, the band were now put under immense pressure to become ‘the next Nirvana’, although the album had appeared even before Nevermind was even released. Ultimately, these groundbreaking records would be virtually nothing without producer Butch Vig, who would also enjoy further success a few years later as the drummer for Garbage.

It was a tall order for Smashing Pumpkins to live up to, let alone surpass, a truly remarkable debut album like Gish. Their sophomore album Siamese Dream, however, achieved just that, with as elegant and graceful an example of an indie band transitioning to the majors as there is in rock history. Like Fleetwood Mac’s Rumours, the backstory of Siamese Dream is bleak and discouraging, which led to Corgan recording most of the album’s guitar and bass parts along with all the lead vocals, despite himself experiencing severe depression, suicidal thoughts and writer’s block.

Drummer Jimmy Chamberlin disappeared for days on end because of his dire heroin addiction (but miraculously was able to record all the necessary drum parts) and was later admitted to a rehab clinic. To make matters worse, bassist D’Arcy Wretzky and guitarist James Iha, who were in a romantic relationship at the time, split up. On the upside, Vig reprised his role as producer for Siamese Dream, but in his own words: “The band was really battling with each other, they were at each other’s throats pretty constantly through the course of that record. I’m surprised we actually managed to make it”.

To say that Corgan was stressed during the recording of Siamese Dream would be a spectacular understatement. He basically dwelled in the studio as he and Vig worked 12-hour days for three months straight, increasing to 14/15-hour days when they were behind schedule. Vig reported that Iha had an unwillingness to communicate, and that Wretzky would sometimes lock herself in the bathroom. Meanwhile, Corgan had been planning his own suicide, revealing the following in a 2011 NME article: “I was suicidal, and I’d been plotting my own death for about two months, and if you’ve ever read anything about the warning signs of suicide, one of them is you give away all your stuff, and I’d given away all my stuff, I’d gave away all my records, I started giving away my guitars”.

As he begrudgingly soldiered on with little to no support from his bandmates, Corgan essentially took matters into his own hands, as Siamese Dream was now running over budget and behind schedule. Corgan, not willing to cut corners with the sound, performed and overdubbed nearly all Iha’s and Wretzky’s guitar and bass parts, feeling he could lay them down satisfactorily in far fewer takes. Wretzky almost quit the band because of this move. When the recording was at last complete, Corgan and Vig hired engineer Alan Moulder (who had mixed My Bloody Valentine’s Loveless album) to polish Siamese Dream as they were burnt out and too exhausted to do so themselves.

Finally, after four months past the deadline and spending $250,000 over the budget, Siamese Dream was ready to be unleashed upon a bored suburban ‘90s youth in America. Not only did it find its audience, the kids flocked to it: the album has sold over four million copies in The States, six million worldwide and debuted at #10 on the Billboard Top 200.

Vig and Corgan had taken full advantage of layering the multitude of overdubbed parts over each other on the tracklisting, which meant that each song had bulk and substance to it. The song ‘Soma’ is said to contain at least 40 overdubbed tracks. The Pumpkins’ remnants of prog-rock and metal gave ‘90s rock brand new connotations and meaning. Corgan’s haunting lyrics spoke to youthful ennui and societal dejection in a way that no one had done previously – not even Nirvana.

During the recording process, Corgan visited a therapist after undergoing a nervous breakdown, which meant having to discuss his troubled past. Throughout Siamese Dream, he explicitly talks about different kinds of relationships with, for example, his autistic half-brother (‘Spaceboy’), his ex-girlfriend (‘Soma’), his parents (‘Quiet’ and ‘Disarm’) and the American music industry at large (‘Cherub Rock’). Inspired by Corgan’s suicidal episode at the time, ‘Today’ featured a very simplistic and melancholic opening melody before being complemented with dense guitar chords; proving that Vig’s and Corgan’s production paid dividends for the band’s success. While the doom-and-gloom nature of the song is apparent, Corgan is still clinging onto hope with “Can’t wait for tomorrow / I might not have that long”. In effect, the song has a hint of irony at its core.

‘Mayonaise’ is very similar subject-wise, and is one of the album’s dark horses. The song’s trademark squealing, abrasive whistle sound came from a guitar that Corgan bought for $65. Every time he stopped playing this cheap guitar, the amp feedback would make that noise. ‘Mayonaise’ was also the final song that Corgan wrote lyrics for and hastily, he put lines together that, at first glance, come across as vague and inconsistent yet perfectly illustrate what he was going through (“Out of hand and out of season / Out of love and out of feeling / So bad”).

As mentioned previously, Smashing Pumpkins were not your bog-standard ‘90s alternative rock band – operating outside the indie bubble, if you will. The opening verse on ‘Cherub Rock’ emphasises Corgan’s opposition towards conforming to this bubble: “Freak out / And give in / Doesn’t matter what you believe in / Stay cool / And be somebody’s fool this year / ‘Cause they know / Who is righteous, what is bold / So I’m told”. He is proud that he is acting counter-culturally; staying true to his musical endeavours, not obsessing over money and, most crucially, imbuing his art with integrity. The igniting crescendo in the intro coupled with the power-chord guitar slides that beautifully construct the main riff are more reasons to love ‘Cherub Rock’.

Smashing Pumpkins are known to hold Black Sabbath as a key influence as demonstrated multiple times on Gish; whether it be through ‘I Am One’, ‘Siva’ or ‘Window Paine’. On Siamese Dream, ‘Quiet’ and ‘Geek U.S.A’ are the Sabbath-like representatives the churn out riff after monstrous riff. While ‘Quiet’ is a pedal-to-the-metal song highlighting Corgan’s parental abuse as a child, ‘Geek U.S.A’ is slightly more progressive in that the song is made up of neatly conjoined sections: the fast and riotous opening; the slow and distant middle; the enriching guitar solo that’s considered to be one of the best of all time and then ending with an uproarious breakdown.

Sonically, ‘Rocket’ and ‘Disarm’ both stand alone. The pulsating, fuzzed-out guitars on the former stand at the forefront with Corgan’s vocals rather than playing in the background, making for a diverse listening experience. On the other hand, the melodramatic ‘Disarm’ is credited alongside ‘Today’ as being a catalyst for Siamese Dream, or a predominant reason that people revisit the album. What makes this single a Pumpkins classic is the famous “The killer in me is the killer in you” line, signifying that Corgan inherited his inner demons from his parents, and the ringing tubular bells accompanying the acoustic guitar and violin. The line “Cut that little child” was somehow sufficient for the BBC to ban the song from being performed on ‘Top of the Pops’.

Siamese Dream was fundamentally a middle finger to the indie establishment laced with Corgan’s internal struggles and emotions. With the possibility that he could take his own life looming over him constantly, he wanted to make his music on his own terms with zero corporate meddling or interference. At this point, grunge’s status was beginning to dwindle, even with the release of Nirvana’s In Utero in the same year. This meant that there was an inevitable void opening, slowly but surely, in the alternative rock genre and Siamese Dream gladly helped fill it. When touring for the album, Smashing Pumpkins soon started rekindling their friendships with one another, learning to get along with each other once more. But after the release of 1998’s Adore, the band had not only divided themselves but also their fanbase.

Smashing Pumpkins’ ambitious, 28-track double LP Mellon Collie & The Infinite Sadness, clocking in at over two hours, was released two years after Siamese Dream, and what a quintessential rock album it was, given that grunge’s hype had been diminished at this point and the guitar music baton had been handed over to the UK’s Britpop movement. Before, Gish not only did they have to contend with Nevermind but also other alternative rock albums like, for example, Red Hot Chili Peppers’ Blood Sugar Sex Magik. By ’95, Nirvana had disbanded and RHCP’s One Hot Minute album suffered from the departure of John Frusciante, leaving the aforementioned void completely wide open for groups like the Pumpkins to flourish. Capitalizing on what they had accomplished with Siamese Dream, the band released their most outstanding and best-selling singles to date, including ‘Tonight, Tonight’, ‘Bullet With Butterfly Wings’ and, of course, ‘1979’. Mellon Collie & Infinite Sadness became the new “Wall for Generation X” that Corgan wanted it to be.

Nonetheless, Siamese Dream, while it arguably may not be their magnum opus, was certainly their most important album, one that cemented their spot within the dysfunctional soundtrack of ‘90s youth culture. Fountains Of Wayne, Garbage, Collective Soul, Bush, Sunny Day Real Estate and more were all inspired by what Smashing Pumpkins had accomplished compositionally with Siamese Dream (as well as Gish), adding a similar distortional bite to their guitar tones. When trying to musically sum up the ‘90s, breakthrough albums like Siamese Dream have the privilege of being recognised and curated without question. (Harry Beynon)

Listen to Siamese Dream by Smashing Pumpkins here via Spotify, and tell us what you think below!