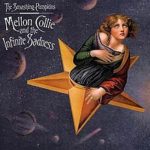 Front cover of ‘Mellon Collie And The Infinite Sadness’

While the commercial pomp and circumstance of Britpop was in full flow on the other side of the Atlantic in 1995, the biggest American guitar acts of the day were turning inwards, away from their audiences and exploring the limits of their own talents, not necessarily with any regard to what critics or fans thought about them. Pavement’s sprawling Wowee Zowee, Pearl Jam’s difficult but ultimately rewarding Vitalogy and R.E.M.’s shielded Monster had all wrong-footed audiences in the twelve months before Smashing Pumpkins attempted to better their 1993 breakthrough classic Siamese Dream, so expectations had been dampened that Mellon Collie And The Infinite Sadness would be a commercial success on the same scale. But not only did the Pumpkins expand their creativity, using their platform to challenge their audience, they did so while selling 10 million albums.

Billy Corgan, the Pumpkins’ eccentric, talented and disciplinarian auteur, took a gamble with the creation of the group’s third album in several respects. Firstly, he ditched Butch Vig, the producer of their debut Gish and Siamese Dream (and also the man behind the nickel-plated sound of Nevermind) and replaced him with Flood and Alan Moulder, who had worked with some of the biggest names of the last decade. Secondly, he decided that Mellon Collie was to be a double-disc set, declaring his ambition from the outset for the new album to be “The Wall for Generation X”, an explicit reference to the kind of prog-rock that the alternative scene had eschewed for such a long time. And thirdly, he relaxed his notoriously rigid regime of discipline and allowed his band-mates, particularly guitarist James Iha, a modicum of control over the direction of the record. For somebody who had reportedly recorded every single guitar and bass track on the Pumpkins’ first two records, Corgan must have felt the stakes to be particularly high this time around.

But the results were spectacular. At 28 tracks spanning over two hours, Mellon Collie is most certainly an indulgent record, but crucially, it is never self-indulgent. Where Siamese Dream was a very singular vision characterised by Vig’s powerful, trebly analogue production, Flood and Moulder brought a digitally-enhanced sense of panorama to Mellon Collie… All the guitars were tuned down by a half-step, giving the whole album a noir-ish claustrophobia. Despite the two disc set-up, with the first titled ‘Dawn To Dusk’ and the second ‘Twilight To Starlight’, there doesn’t appear to be any chronological sense to the tracklisting, but there is a stunning amount of variety contained within. Some of the most violent and compelling metal explorations that the Pumpkins had managed to date rubbed shoulders with acoustic confessionals, synth-based requiems, twilit laments and beautiful, string-swept chamber pop, and incredibly, it all hung together.

Following the evocative piano-based instrumental title track, which places the record in its context of corrupted innocence and lost time, Mellon Collie… kicks off properly with the unashamedly grandiose ‘Tonight, Tonight’, full of heart-stopping drama and imagery borrowed from romantic art. With its sweeping orchestral backing, Corgan’s opening line “time, is never time at all / you can never ever leave / without leaving a piece of youth” seems to place it in a dream-like state, outside of time and space. It’s deeply melancholic, but contains a message of positivity, to seize the moment and to act without regret. After such an emotional gutpunch, it seems hard to imagine how any group could follow it, but the Pumpkins get straight down to their usual business at being really great at what they do with the churning ‘Jellybelly’.

This sequence typifies the twists, turns and mood-swings of Mellon Collie…, as the listener is treated to some of the most powerful ‘typical Pumpkins’ moments, like the shuddering, angular ‘Bodies’, the fire and brimstone of ‘Fuck You (An Ode To No One)’ and ‘Tales Of A Scorched Earth’, and the frankly bonkers tempo changes in ‘X.Y.U.’. These feel like a progression from the material on Siamese Dream, and though it keeps within the established template, it sees them explore the outer edges of that sound, flying by the edge of their pants and acting on instinct. Elsewhere, they ditch the formula altogether – on the mellow ‘Thirty-Three’ and ‘Stumbleine’; the drum machine-programmed nocturnes of the back-to-back trio ‘We Only Come Out At Night’, ‘Beautiful’ and ‘Lily (My One And Only)’; and even use salt-shakers and scissors to make the sleepy, waking dream of ‘Cupid De Locke’. There’s all sorts of gnarled imagery flying about, from obscure astrology to abandoned science, Victorian-era fairy tales to romantic poetry, all lumped into grandiose conceits. It’s so much more ornate than anything they’d even considered attempting before that one can’t help but be impressed, but without Corgan’s unabashed lyrics and vocal delivery, the whole combustible mixture would never have held together.

As a songwriter, he thrived in the deliberately overblown setting he made for himself. The emotional landslides of teen angst, to which he sought to give voice, are mirrored in the fully-committed peaks of noise and harrowing troughs of introspection that swing wildly to and fro throughout the album. Lead single ‘Bullet With Butterfly Wings’, which won the 1997 Grammy for Best Hard Rock Performance, featured couplets that seem almost comical taken out of context – “the world is a vampire” and “despite all my rage I am still just a rat in a cage” – but as a moody teenage anthem, it has very few peers. The same goes for the exquisite ennui of ‘1979’, a million-selling single and Gen-X anthem based on loops and samples, which Corgan described as “a feeling of waiting for something to happen… not being quite there yet, but it’s just around the corner.” The sheer nihilism of ‘Zero’, with that overcast, descending guitar riff, makes it another extremely resonant moment. A lyric like “Emptiness is loneliness / and loneliness is cleanliness / and cleanliness is godliness / and God is empty just like me” skirts unbelievably close to moping sixth-form poetry, but Corgan’s sincere delivery makes it somehow honest, making the track arguably the most quintessential Pumpkins moment in their catalogue.

Anybody’s list of the band’s top ten moments would surely include at least four (indeed, almost any four) tracks from Mellon Collie… That there are so many highlights and unforgettable moments in such a sprawling album, that captures the attention and holds it for almost the entire two hours (the rather rambling ‘Porcelina Of The Vast Oceans’ aside), is Corgan’s artistic triumph, and one he’s not come close to matching since. Mellon Collie And The Infinite Sadness represents one of the very last instances of an artist producing music in this kind of volume with an expectation that it would resonate throughout the ages. It works precisely because it is delivered so straight-faced and completely without irony. Despite the comparatively democratic circumstances of its creation, more than any other Smashing Pumpkins record, it’s Billy Corgan’s monument to himself.

Listen to Mellon Collie And The Infinite Sadness here!