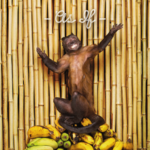 Front cover of ‘As If’

Also known as Chk-Chk-Chk (or, indeed, any noise repeated three times in a row), Californian dance-punk group !!! have long been known for taking neither themselves nor their sound too seriously. Their artwork for their sixth studio album As If is a reminder of a sense of humour from a band that have consistently released solid records, but never reached major commercial success. Whilst ‘Slyd’ from 2013’s Thr!!!ler received radio airplay, it was 2007’s Myth Takes that saw the group gain attention in the UK with tracks including ‘All My Heroes Are Weirdos’ and ‘Yadnus’. As If attempts to create the live sound for which the group are most well known. Over the last several years they have distanced themselves from the dance-punk sound and delved into a more commercial dance-funk-pop soundscape.

As If then struggles with urgency following on from such a crescendo driven track. ‘Ooo’ and ‘All The Way’ tail off into an electro excursion filled with Roland key synths. ‘Funk (I Got This)’ shows inspiration from fellow electronic artist Hudson Mohawke. Its minimal acid house approach is driven by Nile Rodgers-esque deep bassline and frenetic vocal samples. At almost nine minutes, album closer ‘I Feel So Free (Citation Needed)’ is a deep house epic which is a suitably patchy end to an altogether patchy record.

Given the inconsistency of previous records, !!! don’t provide much in terms of originality, but the self-produced record highlights a pleasing devil-may-care attitude towards structure. All though the record feels refreshing and fun, there’s nothing here to suggest that it will break boundaries. Go into this record expecting a typical !!! sense of energy and fun, although it doesn’t exceed previous album. As If has peaks and troughs, but there are moments of excellence to enjoy. (6/10)

Listen to As If here!