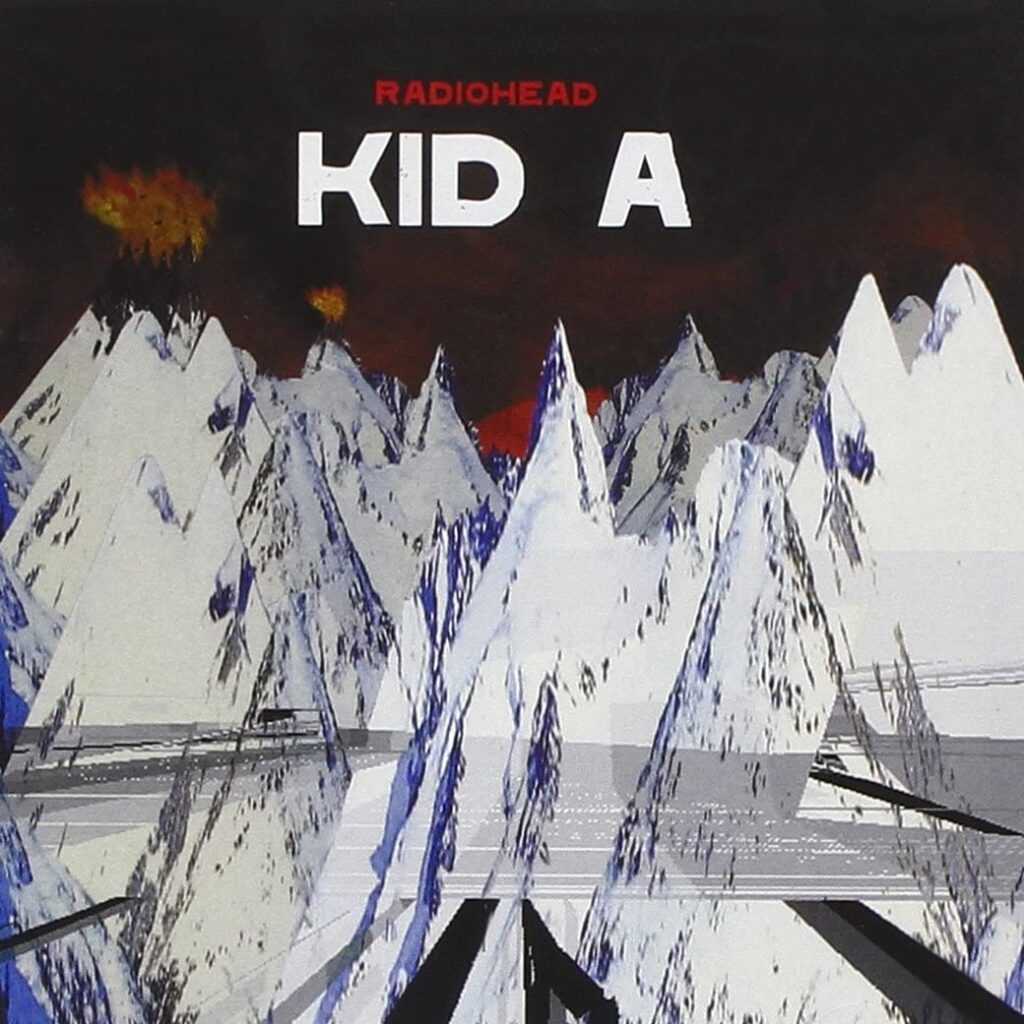 As we get further and further away from the date of its arrival, it gets harder to appreciate just how divisive the release of Kid A was back in 2000, now that an entire generation has been influenced by it, digested it and allowed it to inform their own material. Sure, we were used to experimental sounds breaching the mainstream charts to a certain extent, pioneered by the likes of Björk in the late Nineties, but to a listening public who were feting Radiohead as the defining rock group of the moment, hearing influences of bleep techno, ambient music, cut-up vocal baths and synthesiser washes primarily define the follow-up to a universally acclaimed masterpiece like OK Computer was a shock indeed. Rather than being a rock statement for the ages, aimed at the biggest arenas, here was a record that practically begged to be listened to on headphones, in isolation rather than communion.

Although OK Computer was a runaway critical and commercial success, making Radiohead arguably the biggest guitar band in the world, the accompanying world tour caused the band to suffer from burnout. You can see Yorke becoming more detached and disillusioned virtually by the day in Grant Gee’s 1998 documentary, Meeting People Is Easy. Alienated from the process of promoting music, if not actually creating it along the lines that people expected, the band eventually convened in January 1999 with trusted producer Nigel Godrich but ran into problems regarding Yorke’s bout of writer’s block and an initial lack of consensus about the direction they should go in.

Eventually, the band decided to largely abandon guitars and traditional song structures in favour of textural explorations and electronically based mood pieces. They began to experiment with modular synthesisers and unusual instruments like the ondes Martenot, and using computer software like ProTools to digitally manipulate those sound patches, influenced by the kind of experimental electronic music associated with Aphex Twin and Warp Records. When it became apparent that not every band member would play on every song, particularly because guitars would be few and far between in the mix, disgruntlement soon turned to invention and, eventually, to collaboration. Guitarist Ed O’Brien, for example, used sustain units and looping and delay effects to make sure his notes could linger indefinitely in the mix, meaning they would become part of the texture of these new songs. Eventually, they produced so much material that they had enough for two records – the remainder were released as the equally wonderful album Amnesiac eight months later in the summer of 2001.

What resulted was an album that was different in just about every conceivable way from the cathartic, reaching indie-rock that had established their reputation with The Bends and OK Computer. It’s difficult to state precisely just how divisive Kid A was upon its release. Just as they had done with The Bends following the potential creative albatross of ‘Creep’ five years before,Radiohead successfully created an escape hatch from their own career trajectory. They could see the direction they were going in, didn’t like the look of it, and corrected their course. Informed by krautrock, electronica, jazz and modern classical music that they had increasingly been listening to as the aforementioned world tour trudged on – they had used the music of Messaien as stage intro music – Kid A immediately signalled the group’s intentions that this was not going to be a re-tread of familiar territory straightaway. Rockist critics and fans comparing it to OK Computer, inevitably, were disappointed or baffled, but those with opened minds and who were willing to actually engage with the material on display got far more from the experience.

The claustrophobic ‘Idioteque’ was the track that many of the album’s most vocal fans (and detractors) zeroed in on by way of illustrating the drastically different course that the band had plotted with Kid A. Influenced heavily by the experimental electronic music that Yorke had immersed himself in during the album’s creation and with a chord pattern sampled from electronic music pioneer Paul Lansky’s 1973 work ‘Mild Und Leise’, Yorke sounds like he’s having a panic attack, urgently warning the listener as to some unseen danger with “we’re not scaremongering / this is really happening”. It’s a perfect example of Radiohead’s ability to deploy unconventional methods and sounds in conventional ways.

Almost all of the rest of Kid A was just as introverted and polarising. Although disparate and hard to parse at times, Thom Yorke’s lyrical themes spoke to a menacing, encroaching outside world that he wished to escape – there’s mention of disappearing completely, of “red wine and sleeping pills”, of everything ominously being “in its right place”. Overcast and uneasy from the opening synth tones of its first track, the multi-layered ‘Everything In Its Right Place’ (which was also one of the tracks that Kid A’s champions embraced most fervently) the record. Colin Greenwood’s chugging, murky bass propels ‘The National Anthem’ along with a krautrock-esque sense of purpose, before an apocalypse of squalling brass and percussion brings it to a close. The stiff, clattering beats of ‘Morning Bell’ are offset against Yorke’s yearning, emotional falsetto (“release me!”) to make for an interesting juxtaposition of tension and release. During tracks like these, Kid A’s default mode seems to be a state of paranoia, a meditation on a world going wrong.

But amid the general darkness and the strange, alien landscapes of the music, there are moments of tranquility and peace. Despite the slight undercurrent of seasick tension, ‘Kid A’ is a restful electronic lullaby, with Yorke’s vocals digitally distorted and masked beyond any kind of recognition of the lyrics. The ambient instrumental ‘Treefingers’ is like a colder take on Brian Eno’s famous productions, redolent of the second halves of Low and “Heroes”, while the serene ‘Motion Picture Soundtrack’ closes the album with something approaching a resolution, however uneasy.

A couple of moments in mid-album pair ‘Optimistic’ and ‘In Limbo’ gave the lie to the idea that Radiohead were somehow ditching guitars altogether. The former was perhaps the only moment to give succour to those fans expecting another OK Computer, even if the guitar tones were fuzzed out, while the gentle lull of ‘In Limbo’ could even have come from The Bends. Recorded predominantly with acoustic guitar, ‘How To Disappear Completely’ is simply spellbinding, perhaps the most overtly existential song that Radiohead have ever recorded, but one that doesn’t border on self-parody and delivered without any trace of ironic self-awareness.

Kid A wasn’t just innovative in purely musical terms, but also in the way that Radiohead embraced groundbreaking methods for its promotion – namely, the opportunities offered by the internet, then almost completely untapped territory in terms of how the slow-to-adapt music business was operating in 2000. There were no singles released from the album, no music videos, almost no interviews. Instead, it was promoted through a series of cryptic, often creepy ‘blips’ – micro-clips lasting between around five to 30 seconds designed for insertion in TV ad-breaks or online banners – that featured the deeply disconcerted grinning bears that have since become a core part of Radiohead’s visual identity. On the brief tour they undertook surrounding its release, they performed in a customised 10,000-capacity tent, free from any corporate branding or logos. While their embrace of the digital frontier was deemed anti-social at the time, it presaged a new era of comparative openness between artists and fans we’re familiar with today – a theme they continued with the pay-what-you-want download model of 2007’s In Rainbows. It helped to normalise a situation in which the online sphere was a valid way to share and promote music – for many, it was through message boards and fan forums that they primarily experienced and explored Kid A. It was very far from commonplace in 2000 – twenty years later, it’s ubiquitous.

As well as being a symbolic rejection of their own status as rock’s saviours, Kid A had a wider impact on music, seeming to finally silence the prolonged death knells of the Britpop scene, whose most lumpen practitioners were either broken up or still just about staggering along by the turn of the millennium. In pop music culture, the end of the Nineties often felt like the present had died and the future was waiting to be born – it was just kind of surprising that one of rock’s most celebrated acts were the ones to birth it. After a decade characterised by laziness, over-dependence on nostalgia and bands spoon-feeding their public to diminishing returns, Radiohead reminded the scene about what truly constitutes artistry: using your platform to challenge your audience, not placate them. As such, Kid A now fits a lineage that includes Lou Reed’s Berlin, Scott Walker’s Tilt or even David Bowie’s Low – albums from mainstream superstars that, at first, completely upended their audience’s expectations but quickly became hallowed and influential to a new generation of fans.

Although it had been freely available over the internet following a leak several weeks before, Kid A debuted atop the albums chart in both Britain and America, becoming their first to do so Stateside. An incredible success, considering the size of the risk that Yorke and co. were taking with their established sound, and a heartening one, a reminder that audiences usually will go along with a band who credit their fanbases with intelligence while experimenting. As Pitchfork pointed out around five years after the album was released, although it was initially a kind of intellectual virtue signal – a sign that you “got it” – Kid A quickly became regarded as the crucial pivot point in Radiohead’s career path and wider reputation, the sound that people would most associate with them. While many took some time to get used to these elliptical songs that relied upon texture rather than hooks, it was soon not controversial at all to say that you liked it. Kid A doesn’t sound like the work of a rock group, but it does sound like Radiohead.

Listen to Kid A by Radiohead here via Spotify, and tell us what you think below!