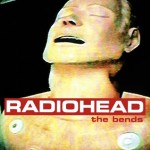 Front cover of ‘The Bends’

In 1994, few would have predicted that Radiohead would turn out to be the most influential rock group of the next twenty years. Then merely one of many post-grunge bands with a moderately well-received debut, their defining characteristic was the global hit single ‘Creep’ which, while it was their breakthrough, looked like it was becoming an albatross in terms of people’s expectations of them. The ridiculously tame ‘Pop Is Dead’ was a subsequent non-album single that had bombed. An exhausting world tour of nearly two 18 months had caused the group great frustration, and they entered the studio with the intention of breaking free from the shackles of their sound by pretty much any means possible. The result was The Bends, one of the great alternative rock albums of the 1990s, and one that casts such a huge shadow over guitar music two decades later. So how did Radiohead go from potential one hit wonders to epoch-defining innovators in such a short time?

The sonic jump between their 1993 debut Pablo Honey and this record is huge, a rare developmental quantum leap arguably only achieved subsequently by The Horrors with their sophomore effort Primary Colours nearly fifteen years later. It is partly explained by the 1994 EP My Iron Lung, which saw Radiohead begin experiment with instruments and shorter, different song structures, notoriously ending with the band “killing ‘Creep’”, taking the brave step of effectively killing their golden goose by recording a breathtaking acoustic cover version and vowing to never play their most famous song again in public. The squalling, sneering title track from the EP is included on The Bends, to indicate a continuation of the artistic intent therein. The iron lung, of course, keeps someone alive but completely restricts their freedom of movement, a metaphor for what ‘Creep’ had become to its creators. But there was far more to The Bends’ commercial and critical success than a simple defiance of expectations.

It was a case of the creation and resolution of tensions, not only in lead singer Thom Yorke’s lyrical themes of social dislocation and alienation but also in the contrasts between warmth and anxiety, of rock and post-rock, of the personal and the political. Radiohead struck a perfect balance between seemingly irreconcilable tendencies. For every moment of cathartic angst expressed through noisy, discordant guitars (‘Planet Telex’, ‘Just’, ‘My Iron Lung’, ‘Sulk’) there’s a tender and beautiful acoustic piece that sends shivers up your spine (‘Bullet Proof…I Wish I Was’, ‘(Nice Dream)’, ‘High And Dry’, ‘Fake Plastic Trees’). As well as Jonny Greenwood’s intelligent art-rock guitar constructions, Yorke’s vocal delivery has a lot to do with the creation of these tensions. His angsty falsetto, capable of great volume as well as delicacy, was the antithesis of Liam Gallagher’s chest-beating style. His singing style has been adopted by many hugely successful artists subsequently – Coldplay’s Chris Martin, Muse’s Matt Bellamy, Travis’ Fran Healy, Elbow’s Guy Garvey and Keane’s Tom Chaplin all owe The Bends and Yorke a huge debt of gratitude.

The vague Generation X angst of Pablo Honey was now more coherent, and expressed outwards in a more focussed manner. The title track sums the theme up perfectly (“I wish it was the ‘60s / I wish we could be happy / I wish, I wish, I wish that something would happen”) – that palpable sense of Francis Fukuyama’s ‘The End of History’, that Western society had resolved itself to endless materialism after the Cold War, where there would be no grand, era-defining struggles for future generations, the same sentiments expressed in Chuck Palahnuik’s neo-anarchist novella ‘Fight Club’ at around the same time. “There’s always this feeling that you’re this extension of the Coca-Cola thing,” Yorke said in interview around this time, putting his finger on that vague sense of identity loss, and The Bends was a fragile yet defiant articulation of that feeling. The post-rock alienation of ‘Just’, fluctuating between calm and chaos, addressed self-harm and depression, as did ‘Black Star’. The gorgeous ‘Bullet Proof… I Wish I Was’ and ‘(Nice Dream)’ served as resting interludes between the swirling guitar storms of ‘Bones’ and ‘My Iron Lung’. The interaction between and resolution of these impulses, which, on paper, were at cross-purposes to each other, worked like a dream.

Upon its release in March 1995, 25 months after their debut, The Bends was universally applauded for its willingness to stand out from the hugely dominant Britpop theme. Whereas Pablo Honey had cravenly copied the predominant post-grunge scene, The Bends saw Radiohead take their destiny into their own hands, taking their cues from massive rock acts like U2 and Pink Floyd – bands who, by 1995, were seriously uncool amid the ‘60s guitar pop revivalism. It resonated with the alienated teenage feeling of dislocation that lingers into your mid-twenties and often beyond, a theme implicitly hinted at throughout – the unsatisfied girlfriend Yorke sings to in ‘Black Star’; the encroaching emptiness of consumerism of ‘Fake Plastic Trees’; the bewildered office worker who gives up and lies in the street in the compelling video for ‘Just’; the terrifyingly bleak closing track ‘Street Spirit (Fade Out)’.

Crucially for Radiohead’s career, they were picked by R.E.M. as the support act for their Monster world tour, with whom they shared not only a musical sensibility but also an audience. Thus, it exposed them to an enormous, virtually ready-made fanbase. The Bends rose as high as Number 4 in the UK Albums Chart, but spent an incredible 160 consecutive weeks inside the Top 100. Its fifth and final single, the aforementioned ‘Street Spirit’, entered the charts at Number 5 nearly a year after the album’s release, an indicator of its longevity. Radiohead would build on the record’s themes and musical direction with its 1997 follow-up OK Computer, a sprawling indictment of the Western consumerism and politics filled with pre-millennial paranoia. Of course, it is this version of Radiohead that quite a lot of fans still identify with primarily, which made their electronic reinvention on 2000’s Kid A such a tremendous gamble. But that’s for another review.

Listen to The Bends in its entirety here!