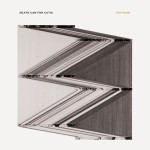 Hang on, when exactly did Death Cab For Cutie become veterans? Throughout the noughties they became something of an institution, holding a reputation for eager, wide-eyed and emotional indie, cruelly typecast in some quarters as good for soundtracking slushy teen dramas like ‘The O.C.’. But perhaps we didn’t notice them growing older. Their eighth album finds them in a state of flux – one of their two ever-present members Chris Walla is playing for the final time on a Death Cab record, and it’s also the first that he hasn’t had a hand in producing. Its title Kintsugi is the word for the Japanese art of repairing broken ceramics with precious metals, a useful metaphor for the group’s decision to carry on in the face of Walla’s decision but also the public disintegration of lead singer Ben Gibbard’s marriage to actress Zooey Deschanel.

Indeed, the feeling of finality infects the best parts of Kintsugi. The excellent opener ‘No Room In Frame’ is like the polar negative of their finest hour ‘I Will Possess Your Heart’, a downbeat, moody and slightly electronic track clearly referencing separation and celebrity (“was I in your way when the cameras turned to face you / no room in frame for two”). The quiet confessional ‘You’ve Haunted Me All My Life’ channels classic early ‘00s Death Cab, and the recurring imagery of ‘bursting’ and ‘disconnecting’ throughout the gated-drums, ‘80s cali-rock of ‘The Ghosts Of Beverly Drive’ serves as a decent first cut from the album.

Elsewhere, sadly, the signs are that Death Cab is showing signs of fatigue as a creative vehicle after nearly two decades. It’s almost as if Gibbard is so focussed in putting across his singular message of heartache that it comes off as clinical and sterile. For a man licking his wounds and effectively having a conversation with himself, he doesn’t achieve that sensation of making the listener feel like he’s eavesdropping on an individual’s personal torment, which is absolutely necessary for records like this. The overwrought tear-jerker ‘Everything’s A Ceiling’, with clichéd lines beginning with things like “when you’re down so far…”, recalls Alphaville, and the lightweight inessential tracks like ‘Ingenue’, ‘El Dorado’ and the anonymous drive-time FM rock of ‘Little Wanderer’ pass by without attracting the listener’s attention.

The cheeseball piano-led closer is the worst offender, so non-descript it could have come from any old American landfill indie record of the noughties. Kintsugi is nowhere near compelling enough throughout to merit anything more than a couple of listens. The few classic moments that remind you of their power are crowded out by Death-Cab-by-numbers filler. It seems a great shame to say it, but after three albums of similarly flawed material, perhaps one of the noughties’ most fondly-remembered indie groups is in terminal decline. (5/10)