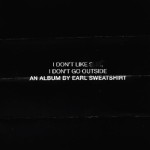 Front cover of ‘I Don’t Like Shit, I Don’t Go Outside’

The prodigiously young Odd Future member Earl Sweatshirt was reportedly very unhappy with his record label for unleashing his second solo album a week earlier than expected. 2013’s Doris was a subtle slow-burner, which at only 44 minutes long played like a rock album in its progression, full of languid, drawling and resolutely un-commercial beat patterns. It received universal critical acclaim, the sound of a man forging an identity following a period spent at boarding school to which he was sent by his strict mother. In the very best way possible, follow-up I Don’t Like Shit, I Don’t Go Outside is more of the same. At less than half an hour in length it’s very easy to listen to over and over again, as Earl races through ten tracks with a short attention span, discarding ideas the minute he feels as if he’s done with them, and this mostly works to the benefit of the record.

Just like Doris, the beats are sticky and amble along in a semi-drugged haze, as Earl’s treacle-thick drawling delivery makes you want to sit back, chill and just let the music happen around you. That messy, DIY mixtape approach makes I Don’t Like Shit… feel loose and spontaneous, in the same its predecessor did. Sub-two-minute opener ‘Huey’ is a musing on his relationship with dope, Earl realising its drawbacks but coming to terms with it, and it sounds both serious and playful at the same time. The echoing, digitally-delayed beats of ‘Mantra’ and the woozy ‘Faucet’, with gentle licks of guitars distorted to sound like keyboards, give Earl a lot of open space within which to operate. Most of these first five songs are at an ultra-relaxed tempo. The flickering single ‘Grief’, containing what sounds like samples of digital interference, is even stranger and more introspective, as Earl reassures himself “all I see is snakes in the eyes of these niggas / mama taught me how to read ‘em” like a man pulling himself back from the verge of weed psychosis.

But in the second half, things get a bit livelier. The ultra-low bass hits of ‘Grown Ups’ and the loping soul of ‘AM // Radio’ are delights, both sounding much less oppressive in their atmosphere and provide some breathing space. The closing duo ‘DNA’ and ‘Wool’ see Earl actually speed up his delivery as well as the beats, and will probably hold greater attraction for mainstream listeners. While the production is thick and hazy throughout, I Don’t Like Shit… is at heart a minimalist album, and all Earl really needs to re-construct his headspace on record is a blunt homemade beat, a snippet of instrumentation and a microphone. In keeping the album to such a short length, Earl has copped some criticism, but it was arguably a wise decision for such a singular record. (7/10)