REVIEW: The Prodigy – ‘The Day Is My Enemy’ (Take Me To The Hospital / Cooking Vinyl) 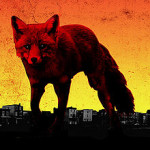 Front cover of ‘The Day Is My Enemy’

When The Prodigy returned in 2009, they had been missing in action for so long that almost anything they put out would  have been well-received. A new generation of ravers had grown up in their shadow, in a world where their collision of punk, house and electro was the starting point for a number of up-and-coming acts in the noughties. Invaders Must Die, while not a match for anything from their ‘90s prime, was at least a statement of intent, showing the Pendulums and Chase & Statuses how rave-rock is really done, with a handful of its singles able to stand proudly alongside the likes of ‘Firestarter’ and ‘Voodoo People’ in their breathtaking live show. So, six years later, their reputation restored, what does The Day Is My Enemy have to add to that?

Virtually nothing, to be perfectly honest. The lame big-beat of lead single ‘Nasty’ sounded exactly like everybody thought it would, like a band trying to sound like The Prodigy, with nothing in the way of innovation or imagination, with Keith Flint’s “triple X-rated” lyrics delivered with all the conviction of a half-arsed Johnny Rotten. With live dates being announced well ahead of any news of the album that they would be touring, there was a suspicion that The Prodigy were going to enter a terminal phase in their career where they had nothing left to say, with any new records being made entirely in the service of their live shows. And this is exactly what has happened.

All you can really say is that The Day Is My Enemy is the most aggressive album The Prodigy have ever made, even more so than the generational middle finger of 1994’s Music For The Jilted Generation. But that aggression is of the ‘all mouth no trousers’ variety, channelled solely toward the surface-level sound of the record, with no deeper thought as to texture or themes. The first three Prodigy records all felt political, even if only indirectly so, because that noise was defining itself against something (tabloid hysteria about ecstasy and the Criminal Justice Bill). 25 years later, The Prodigy have amped up that noise to cartoonish levels but have no message to convey with it. That sound they helped create is everywhere, and DJs make huge money out of it. Liam Howlett said in an interview back in October 2014 that The Day Is My Enemy would be a call-to-arms against this complacent breed of superstar DJ, but we only really hear this in the terrible track ‘Ibiza’, featuring some ludicrous sneers of “Eye-Bee-Fa” from Flint and a cringeworthy guest appearance from Sleaford Mods’ Jason Williamson, who ought to know better.

The opening title track seems to be an attempt to make a song even louder than ‘Spitfire’, the astonishing volley of noise that heralded 2004’s Always Outnumbered, Never Outgunned. It’s thrilling purely because of the all-out sonic assault, with machine guns and abrasive effects clanging left, right and centre. But this approach wears thin incredibly quickly. At 14 tracks and 56 minutes in length, it’s also far, far too long and populated with a lot of tedious clutter. ‘Rok-Weiler’, ‘Rebel Radio’, ‘Wild Frontier’, ‘Roadblox’, ‘Get Your Fight On’… at least half of the tracks conform to a predictable template – bloops, bleeps, garish neon beats and noisy, aggressive production that makes everything sound like rocks in a blender. The final three tracks (‘Medicine’, ‘Invisible Sun’, ‘Wall of Death’), an entertaining variety mixed together with precision and intelligence, rescue the record from complete ignominy, and the gentle instrumental interlude ‘Beyond The Deathray’ works precisely because The Prodigy lay off the aggression for a couple of minutes.

The Day Is My Enemy is a vain, vacuous, noisy headache of a record: one that will be forgotten by all and sundry as soon as The Prodigy have wound up the massive world tour that accompanies it, but it’s not so bad as to tarnish their legacy. Which is fine on one level – The Prodigy deserve to be able to take their travelling circus of rave lunacy and nostalgia on the road and make their money. Some of these tracks will make perfect sense in that context. But let’s not pretend that they’re even remotely relevant in 2015. (4/10)