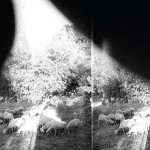 Front cover of ‘Asunder, Sweet And Other Distress’

‘Asunder, Sweet And Other Distress’ is the fifth release by Canadian post-rockers Godspeed You! Black Emperor. The release marks the bands first single LP length since their 1997 debut and their second album since returning from their decade-long hiatus. Though the album is four tracks long, it sprawls across forty minutes and can be seen as three movements. The first movement being a slow builder, followed by two waves of colossal drones and unnerving guitar feedback. Their drone sound has been much compared to Mogwai over the years and this release does what it says on the tin. It’s sweet and distressful in equal measure with a huge draw on their typical style of it being more of an artistic narrative, rather than four individual tracks.

Opening track, ‘Peasantry or Light! Inside of Light’ is by far the highlight with a progressive alternation between crunching riffs and a horn-driven electronic backdrop. There is a distinct Middle Eastern influence with a sense of uplift. With the ecstasy comes the flip side, the claustrophobic horror on ‘Lamb’s Breath’ which wouldn’t be out of place in a horror film. The static combination between static guitar and electronic harmonies provide an uncomfortable hypnotic pulse. The title track and ‘Piss Crowns Are Trebled’ follow nicely from their predecessors and rise from the abyss to a more elegant rumble of violins and a resonance of distorted guitar. This is a return to their heavier work and is less of a throwback to tracks such as ‘Mladic’ which use Boards Of Canada style samples.

GY!BE are a band that require the listener to have an acquired taste, but it’s surprisingly accessible in comparison to their back catalogue. It’s a full-on sonic gauntlet that says as much when it’s quiet as it does at full volume, and it takes the listener on an emotional journey between being unnerved and relaxed. This is music in its purest form – it relies simply upon instrumentation and the architecture of building emotion through music. (7/10)

Check out the entire album here!