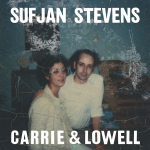 In a career spanning fifteen years, American auteur Sufjan Stevens has made six-disc Christmas albums, started and abandoned a series of albums about the 50 U.S. states, made experimental electronic records, collaborated with rappers, and even had a residency at the Brooklyn Academy of Music. Yet for all this, we’ve never really gotten to know him very much. However, this might be about to change with his seventh album Carrie & Lowell, whose title references his mother, who was diagnosed with schizophrenia and battled drug addiction, and his stepfather. Pitchfork are even hailing it as his best record yet – a bold claim in the light of 2005’s conceptual epic Illinois. Time will tell whether Carrie & Lowell is held in such high regard later, but it is certainly the most emotionally intense record he’s ever made. What you ultimately make of it depends on how you ‘like your Sufjan’ – sprawling and elliptical or stripped-down and direct.

Musically, Stevens returns to the bare bones approach of 2004’s Seven Swans, constructed with acoustic stringed instruments and a minimum of percussion or other extraneous flourishes. At times shockingly raw and insightful, he explores his relationship with his mother through a series of snapshots of memories from his childhood. On ‘Fourth Of July’ he remembers her death from stomach cancer and his feelings of helplessness and futility, and uses it as a jumping off point to reminisce on family trips. Set to a delicate, hazy piano backdrop like the soundtrack to a film, it’s mournful without being overbearing, and poignant lyrics like “the hospital asked should the body be cast / before I say goodbye, my star in the sky” stun the listener into silence. Carrie & Lowell is overflowing with such moments, and in this sense it’s a perfect, singular record that remains disciplined and never wallows in misery, remaining philosophical and strong as a counterpoint to its sonic fragility.

Stevens isn’t afraid to tackle subjects like religion and concepts of the afterlife, but he does so with the deepest respect and intelligence despite coming to cynical conclusions. ‘No Shade In The Shadow Of The Cross’ sees him make allusions to such things in lyrics like “drag me to hell in the valley of The Dalles / like my mother give wings to a stone / it’s only the shadow of a cross”. His breathy falsetto is reminiscent of the late great Elliott Smith, and it’s a perfect vehicle for these songs about regret, introspection and memory. On the folky ‘Should Have Known Better’ he rues “nothing can be changed / the past is still the past / a bridge to nowhere”, realising the futility of dwelling upon loss. A number of the aforementioned songs that deal with family trips (‘Carrie & Lowell’, ‘All Of Me Wants All Of You’, ‘Should Have Known Better’, ‘Fourth Of July’) are framed as unflinching reveries, which sound happy on a surface level but, underneath, often deal with childhood trauma, such as when he and his brother were accidentally left behind at a video store when he was five.

Memory, loss, depression and grief are continual themes in the album, yet are always dealt with sensitively and in a relatable manner despite the specific times, names and places. The fragile, ghostly song structures are conjured so delicately that you feel a strong wind would disperse the album into nothingness, making it something of a headphones album, and even then requiring complete silence to listen to. Stevens’ lyrical clarity, even though he’s delving into the deepest corners of his memories, is a marvel throughout. It’s record to immerse yourself in and lose yourself to. Hauntingly, heartbreakingly beautiful, Carrie & Lowell is a rare album that teaches us more about what it is to be human. (9/10)